Southland senior guard Sydney Payne pushes the ball up the court for the Lady Raiders against Valwood. Photo by Ken Gustafson

AMERICUS – While it was close in the first quarter, the Southland Lady Raider basketball team (14-3, 4-1) used their defensive pressure to create turnovers and turned them into points. From the second quarter on, they pulled away from Valwood and won 50-34 over the Lady Valiants on Friday, January 18, at Southland Academy (SA).

“We played them earlier this year. Sometimes the second time around in the region, they sort of know what you’re going to do,” SA head coach Ty Kinslow said. “We felt like we had a good game plan. Haleigh Warren got us off to a good start knocking some shots down. Then our defense took over from there.”

Warren led the Lady Raiders with 12 points, including two three-pointers. Macy Williams was also in double figures with 10 points. Riley Mitchell, Maddie Crisp and Holly McCain each chipped in six points in the winning cause.

For most of the first quarter, it was a back-and-forth affair with SA leading 8-7. However, with a little over two minutes left, the Lady Raiders went on a 7-2 run to close out the first quarter. By the end of the quarter, SA led 15-10. 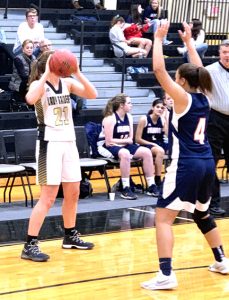 Warren led the Lady Raiders with 10 first-half points. Six of those came on two three-pointers. Williams chipped in eight points during the first half for SA. 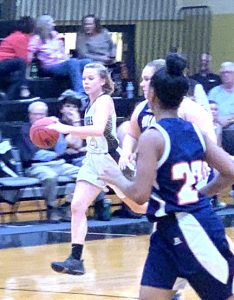 Southland guard Maddie Crisp pushing the ball up the court for the Lady Raiders. Crisp scored six points in the win over Valwood.
Photo by Ken Gustafson

The Lady Raiders continued to control the game in the third quarter. With about a minute to go, McCain scored to give SA a 42-21 lead. The Lady Valiants struggled to score, and the Lady Raiders went into the final quarter leading 44-22.

The Lady Valiants went on a 5-2 mini run in the fourth quarter, but did not pose a major threat to the Lady Raiders’ lead. SA would go on to win 50-34.

AMERICUS – It was a game in which both teams fought to win as if their lives depended upon it.... read more