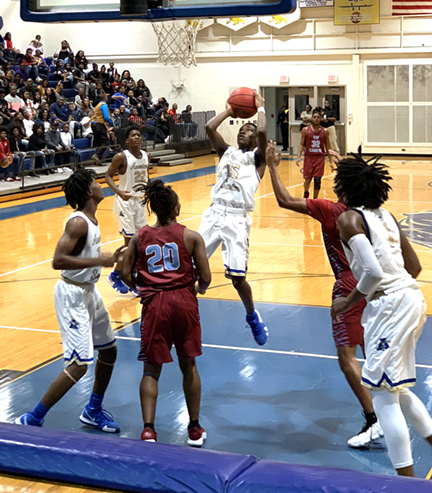 AMERICUS – The Americus-Sumter Panthers (ASHS) came into this crucial Region 1-AAAA contest against Carver (Columbus) (CHS) trailing the Tigers in the region standings by two and a half games. The Tigers, undefeated in region play at 11-0, held the top spot, while the Panthers were in second place at 8-2. The game turned out to be an exciting, hard-fought game that one would expect between two teams fighting for a region championship. The game had to be decided in overtime and it went down to the wire, but ASHS guard Melton McCoy’s three-point attempt at the buzzer to send the game into double overtime fell short. The Panthers fell to the Tigers 52-49 on Saturday, January 19, at Americus-Sumter High School.

In spite of what was an exciting, hard-fought game between the top two teams in Region 1-AAAA, ASHS head coach Michael Hoffpauir was extremely disappointed with his club’s performance, especially with a chance to cut into the Tigers’ first-place lead.

“Our guys just didn’t come to play,” Hoffpauir said. “That was horrible basketball from our team. We couldn’t catch. We couldn’t shoot. We couldn’t do anything. It was just a horrible display of basketball, and if we don’t fix it, we’re not as good as we think we are.” 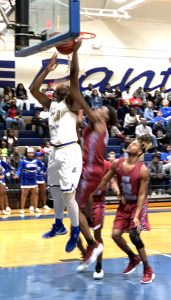 Joshua Lusane led the Panthers in scoring with 11 points and Trae Brown scored eight. Both Wallace Bradley and Mike Flemming each chipped in six points in the losing cause.

For the Tigers (16-4, 12-0), they had three players in double figures. Kevon Taylor led CHS with 14 points and Jalen King scored 12. Devin Flowers chipped in 10 points.

The first half was a back-and-forth affair between both teams. Even though the Tigers took a 13-8 lead at the end of the first quarter, the Panthers went toe-to-toe with them during the rest of the first half. By halftime, ASHS trailed 24-21. 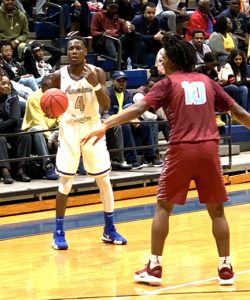 ASHS guard Trae Brown with the ball. Brown scored eight points against Carver (Columbus), but scored 17 in the win over Monroe (Albany).
Photo by Ken Gustafson

With 4:31 to go in the game, the Panthers trailed 37-34 until Melton McCoy hit a three-pointer to tie the score at 37-37. CHS responded when King scored to regain the lead.

Then with 51 seconds left, the Tigers scored on a basket by King to take a 46-44 lead. This prompted a timeout by Hoffpauir to settle his club down. Out of the timeout, the Tigers had the ball, but were unable to score. The Panthers got the ball with 28.1 seconds left, down 46-44.

ASHS moved the ball around until they found David Sumlin, who hit a jumper to tie the game at 46-46. The Tigers’ Ja’cyais Credle drove to the basket and scored, but was charged with an offensive foul, nullifying the basket. The game would go into overtime as neither team could decide it in regulation. 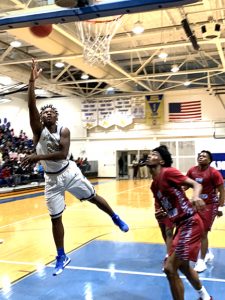 The Panthers had seven seconds to tie the game on a three-pointer, but Melton McCoy’s shot was off the mark, and CHS escaped the Panthers’ den with a 52-49 victory.

Fortunately for ASHS, they did not have a lot of time to mourn the loss to the Tigers. On Monday, January 21, the Martin Luther King, Jr. holiday, they traveled 40 miles south to Albany to take on a former region opponent, the Tornadoes of Monroe (Albany). The Panthers got a much-needed 66-43 victory. They had three players score in double figures. Trae Brown led the Panthers in scoring with 17 points. Nine of those points came on three-pointers. Sam Crumbley scored 11 points and Joshua Lusane posted a double-double. Lusane scored 10 points and grabbed 10 rebounds.