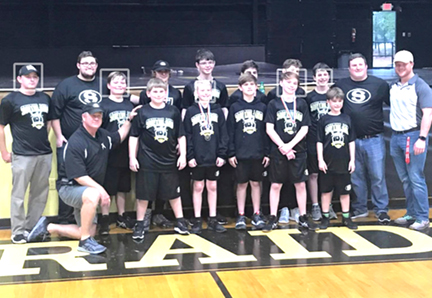 SA finished with a total of 133 points. The Raiders finished 10 points behind State Runners-Up Bulloch Academy (143) and 15 points behind state champions Westfield (148). 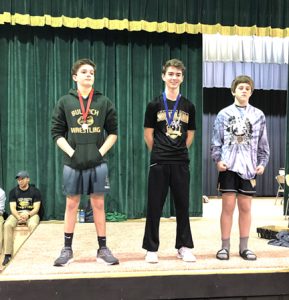 Southland Academy’s Tanner Humphrey (middle) won the middle school state championship in the 118-lb. weight class. To the left of Humphrey is State Runner-Up Samuel Nevil of Bulloch Academy and to the right of Humphrey is Brooks Barbour of Westfield.
Submitted Photo

This was a very young team that overachieved all year,” Hicks said. “They wrestled with heart, pride and gave maximum effort. We had a very strong group of eighth graders that will be missed next year. We were banged up going into the tournament and had to do what was best for the kids. I was just really pleased with how our boys wrestled today.” 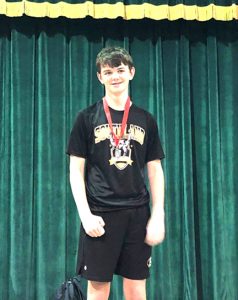 Hicks went on to say that he feels that if the fifth and sixth graders stick with it, they will be a force to be reckoned with in the future. Hicks also congratulated Bulloch Academy and Westfield for their second and first place finishes respectively. 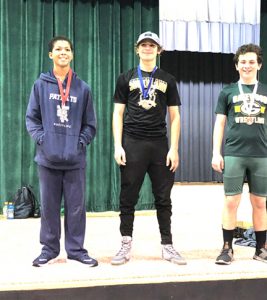 Southland Academy middle school wrestler Will Rhodes (middle) won the state championship in the 132-lb. weight class. To the left of Rhodes is State Runner-Up Dylan Glenn (Strong Rock Christian) and to the right of Rhodes is third place finisher Dakota Davis of Gatewood.
Submitted Photo 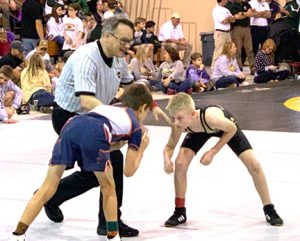 The Southland Academy varsity wrestling team will begin the GISA Region 3-AAA Wrestling Tournament on Thursday, January 24. It will run through Saturday, January 26, at the GSW Storm Dome.