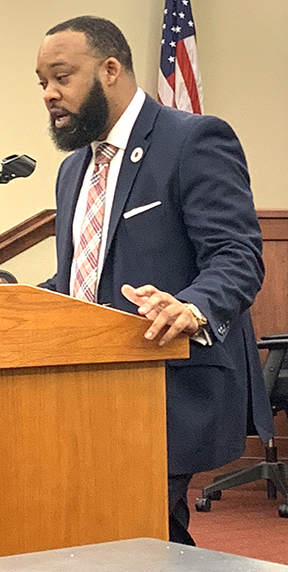 AMERICUS — Close to 60 people crowded into courtroom eight on the second floor of the Sumter County Courthouse on Monday to begin the celebration of the life and legacy of Dr. Martin Luther King Jr. The proceedings began at 10 a.m.
The Rev. Marcus Arnett, master of ceremony, made opening remarks to begin proceedings. Clay Jones Sr., the newly-elected chairman of the Sumter County Board of Commissioners and the first African American to hold that seat, welcomed all of those in attendance. After the invocation led by Arnett, Jones introduced Darrell Sabbs Jr., an adjunct math instructor at South Georgia Technical College, as keynote speaker.
The theme of the occasion was “God is our only hope for complete community unity.” Sabbs, a native of Americus, began his remarks by saying that he spent considerable thought about what he was going to speak on, but his mind went, in his words, “all over the place.”
Sabbs said he was fortunate enough to grow up in a household where civil rights meant power to the people, and where Huey’s Ten-Point Program meshed perfectly well with Maya Angelou’s “Phenomenal Woman.” He said he grew up in this very historic community where he could talk about the activism of people such as the late Rev. R.L. Freeman and the Stockade Girls of Lee County. “You could literally write a book about so many people from this community,” Sabbs said. “As I came to terms on my own agreement today, it hit me: Dr. King’s messages activated heroes of social injustices.” He said these heroes from the past, present, and future are representations of what French philosopher Albert Camus said: “The only way to deal with an unfree world is to become so absolutely free that your very existence is an act of rebellion.”
Sabbs told the crowd that each and every one of them are born leaders and born heroes. “We were given a blueprint to develop our gifts from God, and it is our responsibility to fulfill that obligation,” Sabbs said.
Sabbs posed the same question that King posed decades ago: “What’s in your life’s blueprint?” Sabbs said that when a building or structure is built incorrectly, most people assume that the structure didn’t have a strong foundation. “Little do we think that before any structure is ever built, an architect draws a blueprint,” he said. “That blueprint guides the builders to manifest the architect’s design. If your blueprint doesn’t meet the standards and qualifications, then how do you expect the structure of your lives to stand up erect?”
Sabbs said the more diverse relationships and interactions one has with more people and things, the more balanced that person will be. “We, me, and you have a responsibility to God first, ourselves second, our families third, and everything else will serve a place in time as it comes,” Sabbs said. “The goals and expectations we set for ourselves in life are our own. We will be fully rewarded if we are responsible enough to handle our business. If we are not responsible, then we are not rewarded. It’s as simple as that.”
Sabbs said that human beings owe a responsibility of getting an education to themselves and are responsible for one another. “We are responsible for uplifting each other when one of us falls short or does exceedingly well,” Sabbs said. “We are responsible for our behavior and not just on social media, but also in real life, too.” He stressed that responsibility is the difference between a boy and a man, between a girl and a woman, and between right and wrong, but he didn’t stop there. “We have the ultimate responsibility to voice ourselves, we the people, of all injustices in matters of racism, sexism, education, politics, and all other aspects of human life,” he said. Sabbs said that their possessions are their gifts and that every single person in this world has been given a gift by God. “It’s our responsibility to find that gift, refine that gift, and share that gift to the world,” Sabbs said. “Only then will we reach our fulfillment of life. The problem with most of society is that many of us do not know what our gifts are. Like many, we don’t know or aren’t given the opportunity to discover that gift.”
Sabbs went on to say that the gifts that God gives to people are their source of significance in life, and that without knowing what these gifts are, people are starving themselves. “It’s what makes us important. Every man and woman wants to be significant in the eyes of their spouse and their family. Most people call that respect,” Sabbs said. “Some people spend a lifetime trying to find it. The number one motivation of most people is to be respected because being is perceived as being important or significant.”
Sabbs shared quotes that Dr. King made during his lifetime, such as: “If you want to be a street sweeper, be the best street sweeper that you can be. Sweep streets like Michelangelo painted the Sistine Chapel, or like Beethoven composed the Number 9 Symphony, or like Shakespeare wrote Romeo and Juliet. Whatever you want to be, be the very best.”
Sabbs said that our God-given gifts make us persons of value, and that we should share them to better our community. “We then become valuable assets of our communities, our schools and our work places,” he said. “A lot of us cage our gifts and we never let the world see the value we bring to life and how we are fulfilling our purpose in our lives.” 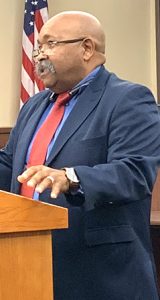 The Rev. Mathis Wright Jr. making his closing remarks at the 10 a.m. program at the Sumter County Courthouse. Wright also spoke at the 11 a.m. service at Friendship Missionary Baptist Church.

Near the end of his speech, Sabbs challenged those in attendance to find their blueprint of life if they don’t already know what it is. “If you do not know what God gifted you, find your gift,” Sabbs said. “Be responsible enough to use your gift and share it for the world to signify your footprints in the sands of time. More importantly, be a person of value. It is never too late to do the right thing,” He continued.
After Sabbs finished his speech, the Rev. Mathis Wright Jr. came to the podium for some closing remarks. He said that much of King’s dream has been fulfilled, but there is still much more of it to be fulfilled. He also said that even some of King’s dream that was fulfilled has been, in his words, “rolled back.”
Wright mentioned that King spoke about how everyone should have heroes, but Wright went on to say that in order to be a hero, it takes courage. “Courage is taking a stand sometimes when no one else will stand with you,” he said. “Courage is when you see something that is wrong and then you refuse to accept it just because everyone else says that it’s all right.”
Wright commented on the theme “God is our only hope.” He said that people give God all of the praise and the rightful accolades, but they still need to put forth faith and stand on the courage that God will deliver them in the battles of life. “My philosophy is that God cannot deliver any of us no matter how brave we are or how much courage we have unless we put ourselves on the battlefield to give Him an opportunity to deliver us,” he said. “That’s where courage comes from, learning to really put your faith in God, to trust God. When you do that, I am a living witness that God will fight the battle, and then you just show up to collect the spoil.”
After Wright’s closing remarks, the crowd went over to Friendship Missionary Baptist Church on Cotton Avenue to enjoy a time of praise, worship, music, and inspirational speaking.