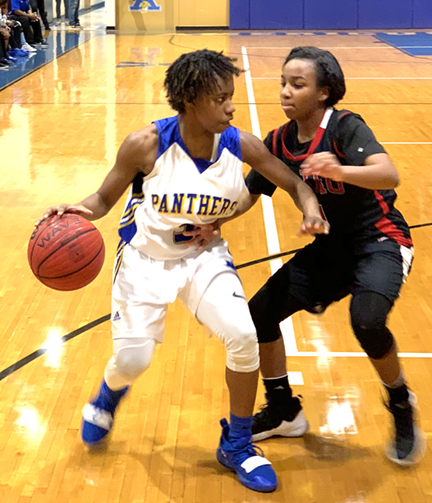 Americus-Sumter guard Tiffani Goodman with the ball against a Cairo defender. Goodman hit two free throws near the end of the game to seal the win for the Lady Panthers. Photo by Ken Gustafson

AMERICUS – Coming into Tuesday night’s game against Cairo, the Americus-Sumter Lady Panthers (8-11, 5-6) were in the midst of a four-game losing streak and had lost nine of their last 10 games. They were ready to end this losing streak against Cairo. The Syrupmakers came close to prolonging the Lady Panthers’ losing streak, but ASHS guard Tiffani Goodman, who struggled at the line down the stretch, was able to convert two critical free throws in the closing seconds to secure a 40-35 victory on Tuesday, January 22, at Americus-Sumter High School (ASHS).

“It’s been a headache. It’s been stressful,” ASHS head coach Sherry Harris said. “It’s been crazy. We’ve been playing pretty good our last two games. We don’t have any outstanding players. We have hard-working, blue-collar players. We’ve got to grind, grind, grind. Those are the performances we’ve got to have.”

Trinity Jackson led ASHS in scoring with 12 points and Destinee Sims scored eight. Goodman ended up with seven points in the win. For the Syrupmakers (8-12, 6-7), Jynyah Cooper and Ambria Vicks each scored 10 points to lead them in scoring.

The first quarter was evenly matched between both teams, but the Lady Panthers had a 9-8 lead by the start of the second quarter.

Even though the defensive pressure of the Syrupmakers was much less relentless than that of Carver (Columbus) on Saturday, January 19, ASHS still struggled with turnovers at times. 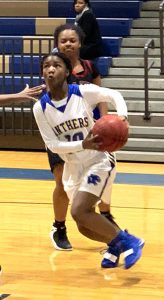 The Lady Panthers went on a 6-0 run to start the second quarter. However, ASHS went through a scoring drought late in the half before Brianna Pope scored on a layup to give the Lady Panthers a 16-11 lead at halftime.

The Syrupmakers used full-court pressure defense in the third quarter, but the Lady Panthers were able to break it.

With the score 19-18 ASHS, Goodman got a steal and scored on a layup. Seeing that the momentum was swinging away from her club, Cairo head coach Daphne McClendon called a timeout. However, the Lady Panthers continued to increase their lead. They scored eight unanswered points, capped off by a basket by Sims. Sims struck again for a three-pointer, and the Lady Panthers had a 30-20 lead with 1:16 left in the third quarter. 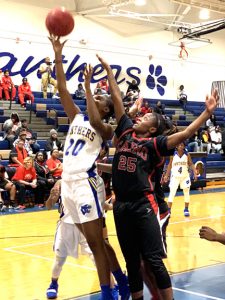 With 19.6 seconds left, ASHS set up for the last shot of the quarter. As time was running out, Anthony drove through the lane, but was called for traveling. The Lady Panthers would begin the fourth quarter with a 30-20 lead.

The Syrupmakers struck first in the final quarter when Cooper nailed a three-pointer, cutting the Lady Panthers’ lead to 30-23. ASHS began to struggle with turnovers, which resulted in points for Cairo. Harris called a timeout to get her club to regroup.

Jackson scored again for the Lady Panthers with less than three minutes left to give ASHS a 38-30 lead. This prompted a timeout by the Syrupmakers.

Cairo implemented a half-court trap with a little over a minute to go to try to create a turnover. They eventually did, but missed a layup on the offensive end.

However, the Syrupmakers got the ball back. Amaiah Young was fouled and made both free throws to cut the ASHS lead to 38-34.

The Lady Panthers will try to improve their standing in Region 1-AAAA when they travel to Columbus, GA to take on the Lady Hawks of Hardaway on Friday, January 25. Tip-off is scheduled for 6 p.m.