Flagler’s Odabe too much for Lady Hurricanes

AMERICUS – The Georgia Southwestern State University women’s basketball team ((8-8, 5-5 PBC) came into their Peach Belt Conference game against Flagler College (FC) having won four out of their last five games. GSW was poised and ready to defeat the Saints and improve their PBC record. It was a fast-paced, run-and-gun style of basketball between both teams, with each team trading baskets. In the closing minute of the game, GSW freshman guard Lex Chatman hit two big three-pointers. The second one brought the Lady Hurricanes to within two at 74-72, but the Saints’ Ivana Boyd hit two free throws in the closing seconds to give the Saints a 76-72 victory over the Lady Hurricanes on Wednesday, January 23, at the Storm Dome. 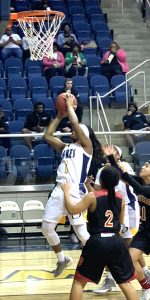 For the game, GSW shot 26 of 75 from the field and went 9-for 25 from beyond the arc. GSW was outrebounded by FC 49-33. The Saints dominated the Lady Hurricanes as far as points in the paint. The Saints outscored GSW 58-30 in that category. Neither team went to the foul line much in the first half, but both teams got there several times in the second half. Overall, GSW was 11 of 13 from the foul line (90 percent) while FC made 12 of 19 foul shots for the game (65 percent).

The Lady Hurricanes got a great performance from their bench. The GSW bench outscored the Saints’ bench 24-6.

The Saints, who came into this contest 10-5 overall and 6-3 in the PBC, jumped out to a 14-7 lead in the first quarter, but the Lady Hurricanes closed out the quarter on a 4-0 run, capped off with a basket by Madison Johnson.

Malaysia Robinson scored for the Saints with 43 seconds left, but GSW had time to get a tying basket. Unfortunately, they came up empty and went into halftime, trailing 28-26. 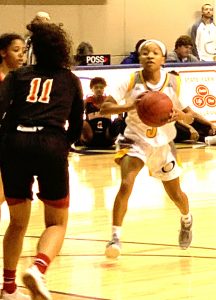 The Saints shot 13 of 38 from the field and were 0-7 from beyond the arc in the first half. FC went to the foul line five times during the first half and made 2 of 5 free throws. They were led in first-half scoring by Odabe’s 10 first-half points.

The Saints came out of the gate fast with two-straight baskets, but Lele Young scored to bring GSW to within four at 32-28. Tyra Smith then hit a three-pointer to cut the Saints’ lead to one. About a minute later, the Lady Hurricanes were down 34-31 until Young hit a three-pointer to tie the game at 34-34. Chatman then gave GSW the lead with a basket, followed by another basket by Trimble. This prompted FC head coach Erika Long-Montgomery to call a timeout with 7:16 left in the third quarter.

Out of the timeout, Odabe scored on the inside for FC, but Trimble responded with a three-pointer to give GSW a 41-38 lead. Trimble would again score to give the Lady Hurricanes a 43-40 lead. Both teams were playing a run-and-gun style of basketball, but both got a break at a media timeout with 4:17 to go in the third quarter. At this point, The Lady Hurricanes led 43-42.

Out of the timeout, the Saints dumped the ball into Odabe, who scored to give FC a 44-43 lead. Both teams traded baskets during the next minute, and with 2:46 to go in the third quarter, the score was tied 46-46. Odabe once again gave FC the lead, but Brianna Perry nailed a three-pointer to give GSW the lead at 49-48. Odabe scored again for the Saints, but Madison Johnson hit another three-pointer to give the Lady Hurricanes a 52-50 lead. Trimble scored again to increase GSW’s lead to 54-50 with 1.3 seconds left in the third quarter.

The Saints scored four-straight points to start the fourth quarter, tying the game at 54-54. 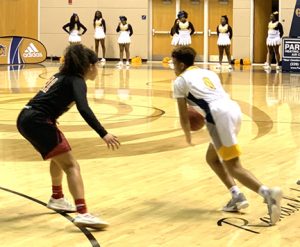 Ivana Boyd was fouled and hit both free throws to give the Saints a two-point lead. Then Chris Wilson scored on a fast-break layup to give FC a 58-54 lead. By the 7:26 mark of the fourth quarter, the Saints had gone on an 8-0 run. GSW’s scoreless drought ended when Johnson hit one of two free throws to cut FC’s lead to 58-55.

Both teams continued to trade baskets, but with 3:22 left in the game, Odabe scored again to give the Saints a 64-61 lead. Then Dayuna Johnson drove into the lane and scored for FC. The Lady Hurricanes found themselves down 66-61 with 2:23 left. This prompted GSW head coach Kelly Britsky to call a timeout. Out of the timeout, GSW was unable to score, and Odabe scored on a put-back to give the Saints a 68-61 lead with 1:46 to go.

However, Boyd was fouled once again and calmly hit both free throws to seal the victory for the Saints.

The Lady Hurricanes will try to get back in the win column when they host PBC opponent Augusta University on Saturday, January 26. Tip-off is scheduled for 3:30 p.m.