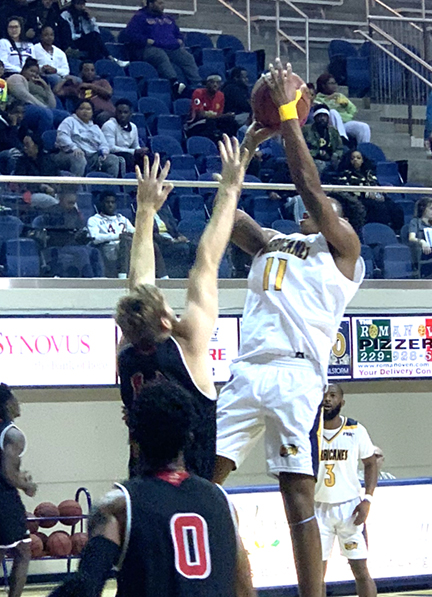 GSW forward Jamari Dean going up for a shot. Dean scored eight points in the loss to Flagler. Photo by Ken Gustafson

AMERICUS – The Georgia Southwestern State University men’s basketball team, having lost eight in a row, needed a win in the worst way when they took on the Saints of Flagler College (FC) Wednesday night, January 23, at the Storm Dome. Up until the 10:05 mark of the second half, it was a back-and-forth affair between both teams. Both teams were trading baskets and playing exciting basketball. However, with a little over 10 minutes left in the second half, a shooting foul was called against the Hurricanes, which upset GSW head coach Ben Hicks. He argued the call with the officials. For that, he was given two technical fouls and tossed from the game.

At that point, it was 49-44 Flagler, but from then on, it went down-hill for GSW as the Saints outscored the Hurricanes 29-16 the rest of the way to leave Americus with a 78-60 victory.

Unfortunately for GSW, they are now 2-14 overall and 0-10 in the Peach Belt Conference. 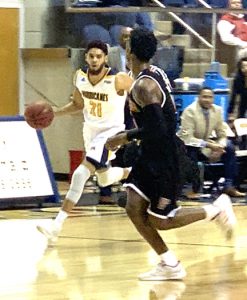 GSW guard Devin Watson (21) with the ball. Watson scored eight points in the loss to Flagler.
Photo by Ken Gustafson

The Saints improve to 7-9 overall and 4-6 in the PBC. The score does not indicate how close this game was most of the way as the Hurricanes were extremely competitive, fighting their hearts out for a victory.

The Saints were led in scoring by Damerit Brown. Brown posted a double-double, scoring 35 points and grabbing 10 rebounds. 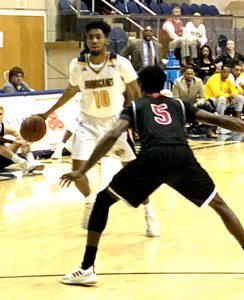 The Hurricanes shot 22 of 66 from the field (33.3 percent) and went 7 for 25 from the three-point line (28 percent). The Saints got to the free-throw line twice as much as did the Hurricanes. FC made 20 of 24 foul shots while the Hurricanes made 9 of 12. There were three other factors that made a difference in this game. FC outscored GSW 34-20 in points scored in the paint. The Hurricanes were outscored 16-10 in second-chance points and the FC bench outscored the GSW bench 24-14. The Saints also had the edge in rebounding. They outrebounded the Hurricanes 44-32.

The first nine minutes or so was a back-and-forth affair between both teams. With 11:12 left in the first half, Brown scored to give the Saints a 13-11 lead right before the first media timeout. However, Howard nailed a three-pointer to put the Hurricanes in front 14-13. The Saints responded by going on a 7-2 run, capped off by a three-pointer by Collin Blanchard just before the second media timeout of the first half with 7:57 remaining.

Vaughn McCall scored for the Saints out of the timeout, but Howard answered for GSW with a three-pointer. Then Taylor scored for the Hurricanes to bring them to within one at 22-21. McCall scored again on the inside for FC, but Kwei Lartey answered for GSW, keeping the deficit at 24-23. The Saints went on a 5-2 mini run to take a four-point lead at 29-25. Chris Metzger then added to the Saints’ lead with a short jumper. The Hurricanes went through a brief scoring drought until Jalen Morgan scored with 2:34 left in the half to cut the Saints’ lead to 31-27. Morgan was fouled on the play, but missed the free throw. 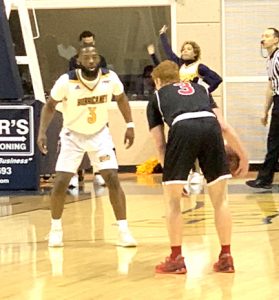 Both teams went through another brief scoring drought until GSW guard Jaylin Rutherford drove to the basket and scored. Rutherford made the free throw and the Hurricanes were down by just three. GSW got the ball back and Taylor was fouled. Taylor made both free throws, cutting the deficit to 33-32 with 30.4 seconds left in the half.

The Hurricanes ran the clock down for the last shot, but Watson’s three-point attempt was short. Both teams went into halftime with FC leading 33-32.

The second half started off with Brown hitting a three-pointer to put the Saints up by four. However, Watson responded with a three-pointer of his own. The Hurricanes took a 37-36 lead on a basket by Howard with a little over 17 minutes left.

Both teams went through a brief scoring drought again until Howard scored on a layup, giving the Hurricanes a 39-36 lead with under 15 minutes to play. Just before the first media timeout of the second half, the Saints scored to cut GSW’s lead to 39-38.

Out of the timeout, Metzger scored to give the Saints a 40-39 lead. At that point, another timeout was called with 13:39 left.

However, the Saints went on a 6-0 run. Then with 10:05 to go, a shooting fouled was called against the Hurricanes. Coach Hicks was upset with the call and argued with the officials that it should have been an offensive foul on the FC player. For that, Hicks was assessed two technical fouls and ejected from the game. This was the turning point of the game. The Saints were given four technical foul shots, plus three more foul shots because the foul occurred while the player was shooting outside the three-point line. All foul shots were made. At this point, the bottom started to fall out for GSW. They trailed 61-44 with eight minutes to go.

With 7:13 to go, Taylor drove into the lane and was fouled. He made both free throws, cutting the deficit to 61-46. Watson then scored to cut the lead down to 13. It looked as if the Hurricanes were making a final push for a come-from-behind win. However, the Saints responded with a three-pointer by Totoris. Undaunted, the Hurricanes responded with a three-pointer by Lartey, cutting the deficit to 64-51.

With 5:45 to go, the Saints were whistled for a technical foul. Watson made one of the two technical foul shots for GSW. Taylor hit another three-pointer for the Hurricanes, cutting their deficit to 65-55. However, the Saints countered when Jeffercy Jean hit a three-pointer to increase the Saints’ lead back to 13. With 3:22 to go in the game, the last media timeout occurred. The Hurricanes had a little over three minutes to execute a come-from-behind victory.

However, Brown made it tougher for the Hurricanes as he made another three-pointer for FC. Lartey responded with a basket for GSW, but the Hurricanes still trailed 71-57.

The Saints scored four more points to increase their lead to 18. There would be no comeback for the Hurricanes as the Saints went on to win 78-60.

The Hurricanes are in the midst of a nine-game losing streak. They will try once again to end that losing streak and earn their first PBC win when they host Augusta University on Saturday, January 26. Tip-off is scheduled for 5:30 p.m.