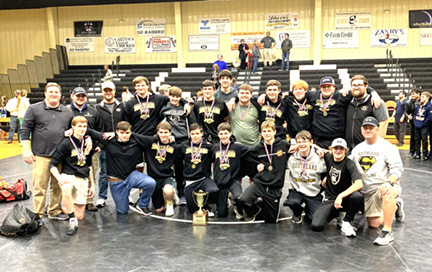 The Southland Academy wrestling team posing with their first-place medals and trophy after winning their eighth straight region title. Photo by Ken Gustafson

“I’m very pleased with the outcome. We put ourselves in a good seed for the state tournament next week,” Southland head coach Mike Smith said. “It always comes out to where first place gets the better bracket than fourth. Anytime we can finish in first or second, we’re very pleased. I think this gave us an edge going into next week.” 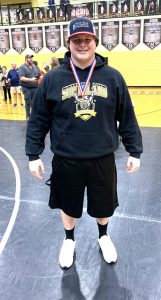 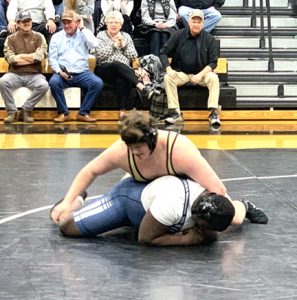 SA senior wrestler Ragan Norman competing in one of his matches.
Photo by Ken Gustafson

This was also a great night for the seniors. Senior Cole Landreth finished as region champion in the 152-lb. weight class, and senior Ragan Norman won the individual region title in the 285-lb. weight class. Norman described to the Americus Times-Recorder how he won his first match against a wrestler from Tiftarea Academy. “With 11 seconds, I just went in and took an outside leg sweep and took a head-in-arm and pinned him. That was it,” Norman said. 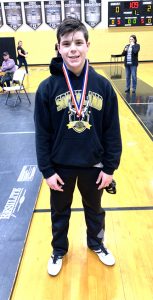 Landreth described to the Americus Times-Recorder how he was able to win one of his matches on his way to a region title. “I went in and tried to get as many take downs as I possibly could,” Landreth said. “I let him back up, then I tried to get some more take downs. In the second round, I started doing more of my pinning moves. That’s how I won.”

Seniors Parker Weldon and Ben Cook both turned in outstanding performances in the tournament. Both finished as region runners-up. Weldon finished in second place in the 195-lb. weight class and Cook finished second in the 220-lb. weight class. 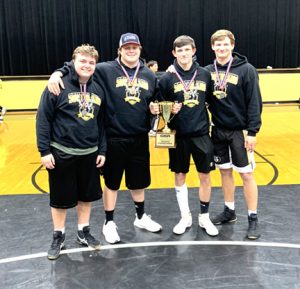 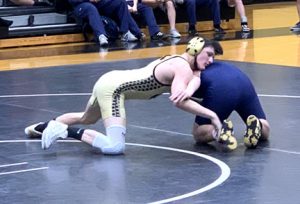 SA senior wrestler Cole Landreth competing in one of his matches during the Region 3-AAA Tournament. Landreth won the individual region title in the 152-lb. weight class.
Photo by Ken Gustafson

The performance of the Raiders, especially the younger wrestlers, should bode well for the Raiders in the GISA State Wrestling Tournament to be held at the GSW Storm Dome Friday and Saturday, February 1-2. 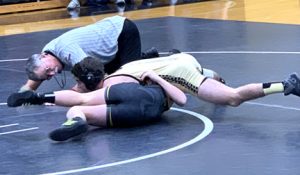 Last year, the Raiders finished as state runners-up. They will be trying to move up one notch this year. The tournament will begin on Friday, February 1, at 11 a.m.