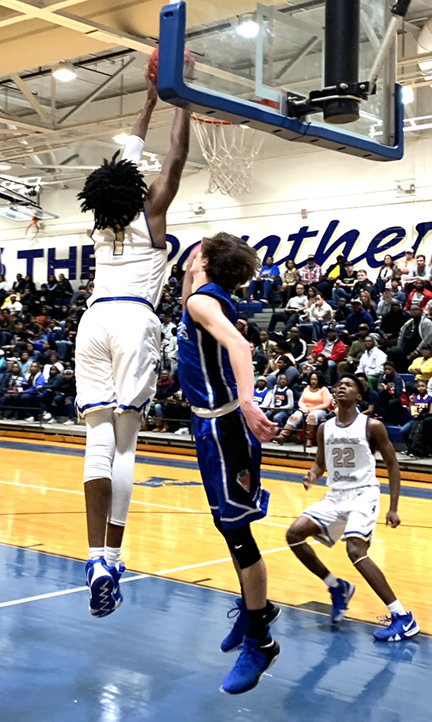 Americus-Sumter senior forward Joshua Lusane scores on one of his dunks against the Blue Devils. Photo by Ken Gustafson

AMERICUS – The Americus-Sumter boys’ basketball team (18-3, 10-3) came out on fire as they shut out winless Columbus High School 16-0 in the first quarter and rolled their way to a 71-24 thrashing of the Blue Devils on Saturday, January 26, at Americus-Sumter High School (ASHS).

The Panthers had balanced scoring all across the board. Only Joshua Lusane scored in double figures with 11 points to lead ASHS. Quevoluia Willoughby was next with nine points. Trae Brown and Mike Flemming each scored seven points. Jakobe McCuller scored six points on two three-pointers. Joshua Moore also scored six points. Jakontist Gordon and Jordan Wiley each scored five points. Sam Crumbley and Melton McCoy each had four points. David Sumlin hit one three-pointer, and both Wallace Bradley and Darion Mitchell each scored two points to round out the scoring for ASHS.

The Panthers shut out the Blue Devils in the first quarter 16-0. CHS didn’t score until the 6:56 mark of the second quarter when Jeffery Mobley scored to make it 21-2 Panthers. 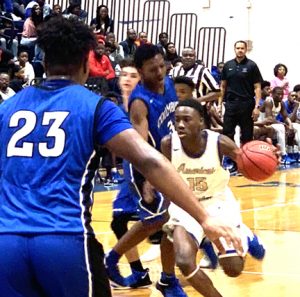 Lusane scored on two slam dunks in the first half. On the second one, Lusane was assessed a technical foul for hanging on the rim too long. At this point, the Panthers led 31-5.

The Blue Devils tried to stall against the Panthers to slow down the game. They didn’t want to get into a “track meet” with ASHS. However, it backfired as the panthers used their defensive pressure to force turnovers and converted them into points.

“I saw how they (CHS) were trying to move the ball,” ASHS head coach Michael Hoffpauir said. “I wanted to pick the tempo up and be more aggressive defensively so that we could dictate the tempo of the game. We came out and started trapping and working on some things that we work on. Overall, the game was good. We got into transition a lot and we’ve been working on transition offense.” Hoffpauir went on to say that it was a good game to get his reserves in so that they could have fun, get the experience and work on things they have been working on in practice. The Panthers did not allow the huge lead they had in the second half to keep them from being disciplined, playing their game and showing excellence in execution. “That’s what we’ve been talking about,” Hoffpauir said. “In the three losses that we suffered, we didn’t solidify the win. We didn’t take care of the ball. We tended to slack off, so that’s what we’ve been working on. I don’t care who the opponent is. We always make sure we solidify the win, take care of our business and play the game the right way.” 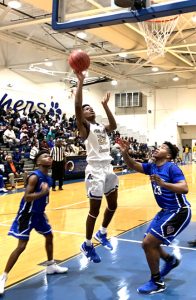 The Panthers were able to speed the game up to their liking and continued to pour it on. By halftime, ASHS led 40-9.

ASHS outscored CHS 9-3 in the first few minutes of the third quarter. The third and fourth quarters were shortened by two minutes due to the large lead the Panthers had.

With a little under three minutes left, McCuller hit a three-pointer for ASHS. The Panthers continued their relentless full-court pressure and continued to score at will. As the horn sounded to end the third quarter, Flemming hit a deep three-pointer to give ASHS a 62-18 lead.

The defense of the Panthers was so intense and relentless that the Blue Devils could barely move the ball around on offense, let alone score. Jordan Wiley hit a three-pointer in the closing minutes of the game for ASHS. By this time. All of the reserves were seeing playing time for the Panthers. When the buzzer finally sounded to end the game, ASHS had won 71-24. 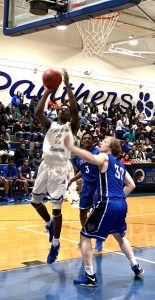 As far as the Region 1-AAAA standings are concerned, Carver (Columbus) has already wrapped up the regular season region championship. They are 14-1 in region play and have one more regular season game against Westover on Friday, February 1. 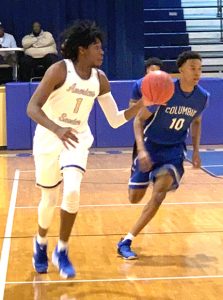 Josh Lusane pushes the ball up the court against CHS.
Photo by Ken Gustafson

ASHS has three region games left. The Panthers will host Shaw on Tuesday, January 29, at 7:30 p.m. They will then host Hardaway on Friday, February 1, at 7:30 p.m. in their last regular season home game. The Panthers’ last game before the Region 1-AAAA Tournament will be Saturday, February 2, at Westover. Tip-off for that game is scheduled for 7:30 p.m.