ASHS forward Brianna Pope goes up for a shot against the Lady Blue Devils’ Enyshuan Jones. Photo by Ken Gustafson

AMERICUS – Coming off a 64-36 drubbing by Hardaway in Columbus on Friday, January 25, the Americus-Sumter Lady Panther basketball team (9-12, 6-7) came into Saturday night’s game against the Columbus Lady Blue Devils (7-14, 4-10) desperately needing a win to regain their confidence. The game was a back-and-forth affair. As with all close games, this one came down to free-throw shooting. With 19.1 seconds left, and the Lady Panthers leading 40-39, ASHS guard Tiffani Goodman was fouled intentionally and made one of two free throws. Being that it was an intentional foul, ASHS kept the ball. Goodman was fouled again and made both free throws to give the Lady Panthers a hard-fought 43-41 win on Saturday, January 26, at Americus-Sumter High School (ASHS).

“She (Goodman) was getting frustrated because she continued to miss them early. I told her ‘Look, you never worry about past mistakes or missed shots. Worry about the upcoming opportunities. You’re going to get fouled again. You’ve got to get up there and knock them down’. That’s what happened,” ASHS head coach Sherry Harris said. “She got fouled. The girl pushed her intentionally. I told her that we don’t retaliate. We just play ball. We ended up closing it out.” 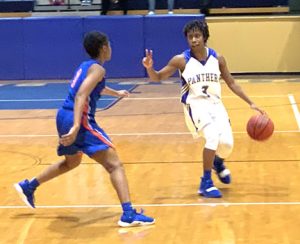 Goodman led the Lady Panthers with 17 points and Brianna Pope scored eight. Divine White also chipped in four points in the winning cause. The Lady Blue Devils had two players in double figures. They were led in scoring by Enyshuan Jones with 22 points. Caroline Hollingsworth chipped in 12 in the losing effort.

The Lady Panthers got off to a good start as they outscored the Lady Blue Devils 11-4 to begin the game. This was partly due to baskets by Goodman and White. As the horn sounded to end the first quarter, Nyja Carson, who is back from injury, scored to give ASHS a 16-7 lead at the end of the quarter.

However, Columbus (CHS) went on a 6-0 run to start the second quarter. Jones was fouled while trying to shoot a three-pointer, but only made one of the three free throws. Goodman scored at the other end for ASHS to give the Panthers an 18-14 lead at the 4:00 mark of the second quarter. 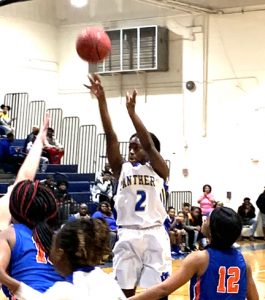 With a little over three minutes to go and ASHS up 18-15, Goodman drove to the basket and scored to give the Lady Panthers a five-point lead. At the 1:50 mark, Trinity Jackson fought for the rebound and scored. She was fouled on the play, but missed the free throw. At this point, ASHS led 23-17.

The Lady Blue Devils went to a half-court trap, but ASHS was able to break it. However. With about 40 seconds to go in the half, Hollingsworth nailed a three-pointer to cut the Lady Panthers’ lead to 25-20. Hollingsworth tried another three-pointer and was fouled. She made two of the three free throws just before the half ended. ASHS led 25-22 at halftime. 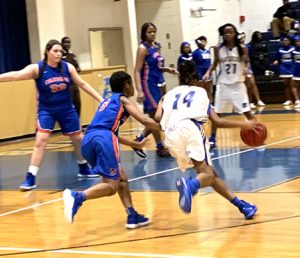 Pope started out the second half by scoring for ASHS. During the next minute or so, both teams traded baskets, with ASHS leading 31-25. After Pope scored another basket to give the Lady Panthers a six-point lead, Columbus called timeout with 3:59 left in the third quarter.

The Blue Devils went on a 6-0 run to close out the third quarter and tied the Lady Panthers at 31-31.

Hollingsworth hit another three-pointer to give the Lady Blue Devils the lead with 7:31 left in the game. However, ASHS responded when Carson scored two-straight baskets to give the Lady Panthers a 35-34 lead. Columbus scored three-straight points, including a basket by Jones, to give themselves a 37-35 lead.

With four minutes left in the game, ASHS trailed 38-37, but Jackson scored to give them the lead.

With 2:31 to go, the score was tied 39-39, but Goodman was fouled while shooting and had an opportunity to give the Lady Panthers the lead at the foul line. Goodman made one of two foul shots to give ASHS a one-point lead. 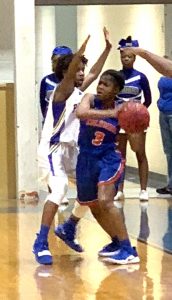 As the game was winding down, ASHS had the ball and the Lady Blue Devils fouled Goodman. They were called for an intentional foul, meaning ASHS would get two free throws and the ball. Goodman hit one of the two free throws, making the score 41-39 Lady Panthers. 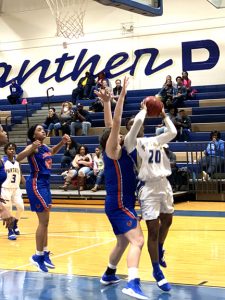 The Lady Blue Devils were unable to get a tying basket and ASHS got the rebound. Goodman was fouled again and made both free throws to seal the win for the Lady Panthers.

ASHS will try to continue to climb up the Region 1-AAAA standings when they host Shaw on Tuesday, January 29, at 6 p.m. Currently, the Lady Panthers are in fifth place in the region standings at 6-7. The trail fourth-place Hardaway by two games as the Lady Hawks are 8-5. 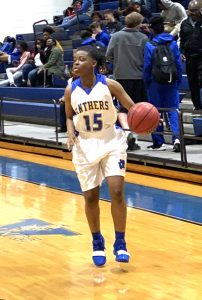 In addition to Tuesday night’s home game against Shaw, the Lady Panthers will host Hardaway on Friday, February 1. It will be their last home game of the regular season. Tip-off for that game will be at 6 p.n. They will finish the regular season on Saturday, February 2, when they travel to Albany to take on Westover. The Region 1-AAAA Tournament will begin the following week.

AMERICUS – The Americus-Sumter boys’ basketball team (18-3, 10-3) came out on fire as they shut out winless Columbus High... read more