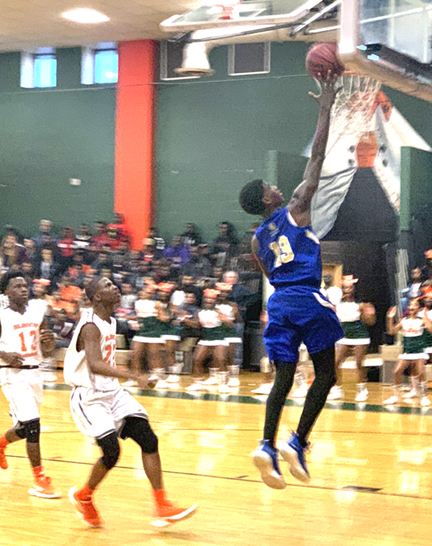 SCMS guard Cameron Evans goes up for a layup. Photo by Ken Gustafson

It was a struggle all night for the Panthers. In spite of the Indians’ tenacious full-court pressure defense, SCMS still had opportunities to score, but couldn’t make shots.

“Their full-court press disrupted us, but we just couldn’t make a basket and we were missing layups when we did have opportunities,” SCMS head coach Rodney Shelton said. “It was just one of those games. We couldn’t make a shot.”

Demtrice Hurley led the Panthers in scoring with 13 points and Brandon Pope had nine. For AMS, they had two players in double-figures. Jai’on Burns led the Indians with 19 points and Tray’veon Westbrook scored 12. 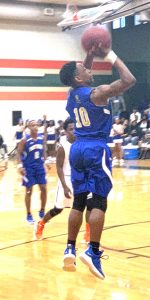 SCMS guard Anthony Tyson goes up for a shot.
Photo by Ken Gustafson

With 15.7 seconds left in the half, a technical foul was called against AMS. This gave a spark to the Panthers as they went on a 6-0 run, but they still found themselves trailing AMS 33-21 at the half.

Hurley led the Panthers in the first half with six points. As for AMS, they were led in first-half scoring by Burns with 11 points.

The Indians resumed their full-court pressure to begin the third quarter and scored the first basket of the second half. This began a 6-0 run by AMS to give themselves a 39-21 lead. With 3:48 to go in the third quarter, SCMS head coach Rodney Shelton called timeout to try and get his club to regroup.

However, the Panthers struggled to score. They finally got a basket on a tip-in by Cameron Evans. At that point, timeout was called with the Indians up 41-23 with 1:49 left in the third quarter.

Through much of the second half, the Panthers missed several layups on the inside. Johnson scored again to give AMS a 47-25 lead. With 3:30 to go in the game, the Panthers found themselves down 49-29. At that point, they were unable to mount a comeback against a quicker AMS team. The Indians would go on to win the Deep South Conference Championship, beating SCMS 56-39.