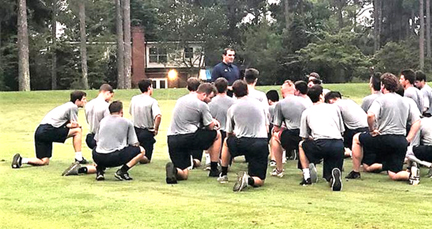 New GSW head baseball coach Josh McDonald addresses the team after a preseason workout. The Hurricanes have been picked to finish 11th in the Peach Belt Conference in 2019. Photo by GSW

After a rough season in 2018, the Hurricanes received 11 points to finish near the bottom of the PBC standings.

Flagler College came in sixth place with 58 points, while both Young Harris College and Lander University were tied for seventh with 40 points. Francis Marion University came in eighth place with 29 points and Augusta University was picked to finish ninth with 22 points.

The Hurricanes return junior outfielder Jonathan Martin, who was recently named a Southeast Region player to watch by the Collegiate Baseball Newspaper. The left-handed outfielder posted a .962 fielding percentage and had 72 pickoffs, along with driving in 21 RBIs. Martin belted eight doubles, two triples and one home run during the 2018 season. The Collegiate Baseball Newspaper also named junior right-handed pitcher Cole Garrett. Garrett, a native of Nashville, GA, is transferring to GSW from Abraham Baldwin Agricultural College (ABAC). Garrett has been named the Southeast Region newcomer to watch for this upcoming season. Senior infielder Jason Baita also returns for his final season at GSW. Baita led the Hurricanes with a .433 slugging percentage while hitting 11 doubles, three triples and three home runs in 2018.

Under new head coach Josh McDonald, the Hurricanes are looking forward to having a turn-around season after putting in tremendous work during the fall.

The first home game for the Hurricanes in the 2019 season will take place on Tuesday, February 5, against Shorter University. First pitch is scheduled for 6 p.m.