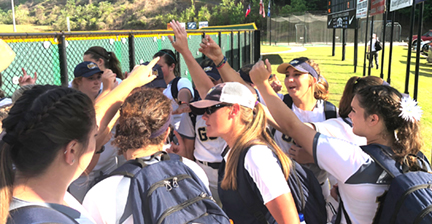 GSW Lady Hurricanes softball team huddling before a game. They have been picked to finish seventh in the Peach Belt Conference standings. Photo by GSW

The University of North Georgia, the reigning PBC champions, received all 10 first-place votes to finish atop the poll with 100 points. Young Harris College was second with 85 points, followed by Georgia College (84) and Columbus State with 73 points. Lander University and Flagler College rounded out the top six, finishing with 62 and 60 points respectively.

Messer, a senior, made 29 appearances at the plate. She started 18 games for the Lady Hurricanes and posted an 8-10 record with a 5.66 ERA. Kuerzi, a sophomore, led the team with 272 put-outs for a .993 fielding percentage and drove in 32 RBIs. Kuerzi also belted four home runs for GSW. Wills returns for her sophomore season. She is currently ranked fourth in the PBC in home runs. The Orlando, FL native finished with 30 RBIs and 11 home runs in her freshman season.

Saints fans need to get over themselves

Like millions of NFL fans around the country, I watched the NFC Championship Game between the Los Angeles Rams and... read more