Americus native, one of six to receive broadcasting scholarship 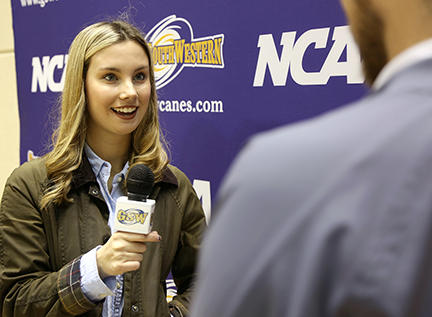 AMERICUS — Hallie Turner, a rising junior at Georgia Southwestern State University (GSW), was one of six students from across Georgia to receive the 2018 E. Lanier Finch Scholarship from the Georgia Association of Broadcasters (GAB).
“I am extremely thankful and blessed to receive this scholarship,” said Turner. “I have wanted to be a broadcast journalist from the time I was a little girl so this scholarship is very humbling.”
The $1,500 scholarship, named after GAB President Emeritus the late “Lanny” Finch, provides financial assistance to deserving students who will carry on the tradition of excellence and professionalism in Georgia’s broadcasting industry.
There were a “record number of applicants this year” said a spokesman from the GAB Scholarship Selection Committee, consisting of participating member stations, who looked at scholastic records, extracurricular activities, community involvement and leadership potential.
“After reviewing Ms. Turner’s application and resume,” said the spokesman, “the committee determined that she possesses many of the qualities it takes to make it in the broadcasting industry. The amount of involvement with her university and community service is exactly the type of candidate the committee looks for.”
For almost two years, Turner has served as the host of “Hanging with Hallie,” the GSW athletic post-game show, interviewing coaches and players for basketball, baseball, and softball.
“I’m very thankful Coach [Mike] Leeder offered me an internship with the athletic department to help jumpstart my portfolio. This opportunity has allowed me to know for certain this is what I want to do,” Turner said.
In addition to being on the Dean’s List and a member of the National Society of Leadership and Success, Turner serves as a Campus Marshal, and is an active sister of Kappa Delta Sorority where she serves in multiple leadership positions and volunteer rolls for various campus and community projects.
Turner says her aspirations of becoming a broadcast journalist began after receiving the “classroom reporter award” at the end of her kindergarten year. “My teacher said I would ask 10 questions before she could answer the first one, and that I never had a problem reporting what had happened around me from the time I left school until I arrived the next morning.”
“My mom always predicted I would be a news anchor,” Turner said. “She thought I resembled former NBC news anchor Katie Couric from the Today Show.”
Turner also recalled a time in fourth grade when a meteorologist from WTVM in Columbus visited her classroom. “I was so overly infatuated with everything he had to say, I talked about it for weeks.” After taking a broadcasting class in high school, Turner stated she felt like broadcasting was something she was being led to do.
Along with her application, Turner submitted three recommendation letters from GSW faculty that proved she was worthy of the GAB scholarship. “Each faculty member echoed the words of determination, perseverance and merit in Ms. Turner’s entrance essay,” said the GAB spokesman. “The Georgia Association of Broadcasters is pleased to offer this scholarship to Ms. Turner and we wish her the best of luck in her career!”
“Hallie is a special young lady and no doubt she is deserving of this scholarship,” said GSW President Neal Weaver. “We certainly wish her the best of luck in pursuing her dream and hope her education and experience at GSW has prepared the way for her.”
Turner traveled to Athens to attend the GAB Hall of Fame Luncheon and be formally recognized. “This is a huge opportunity for me because I will be able to meet many representatives from major media outlets all over the state of Georgia.”
Other winners included Maddie Ray, Phillip Hubbard, and Ashlyn Webb from the University of Georgia; Tony Betton Jr. from Georgia State University; and Marion Mealor from Piedmont College.