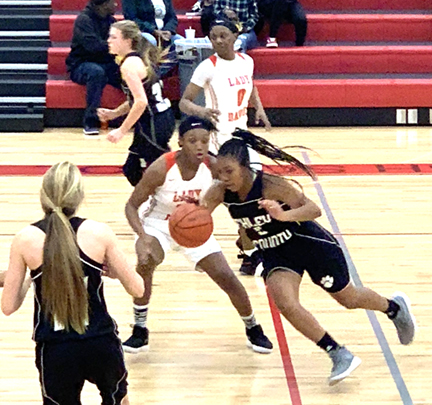 Schley County point guard Dasani Minter scored 14 in an effort to lead the Lady Wildcats to a win over Macon County. Photo by Ken Gustafson

MONTEZUMA – The Schley County (SC) Lady Wildcat basketball team came into Macon county hoping to notch another important Region 4-A win, but a 7-0 run by the Lady Bulldogs in the fourth quarter, coupled with some missed opportunities by the Lady Wildcats, led to a 42-37 loss for the ladies from Ellaville.

“It shouldn’t have been that close”, SC head coach Cliff Royal said. “We missed some shots. We had breakdowns on defense, but I would love to play that team again.”

For the game, two players were in double-figures for the Lady Wildcats. Carmen Phillips and Dasani Minter each scored 14 points. Amiyah Walker scored five points and Emily Campbell scored four points to round out the scoring for SC. 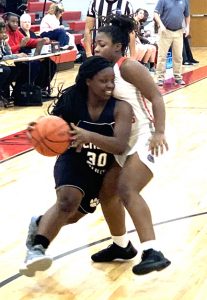 The Lady Bulldogs had two players in double-figures. Titeuna Raines led all scorers with 15 points and Teyanna Fudge had 13.
With the loss, the Lady Wildcats drop to 11-9 overall and 6-8 in Region 4-A play.

The Lady Wildcats got off to a very slow start to begin the game. The Lady Bulldogs jumped out to a 5-0 lead on a basket by Raines and a three-pointer by Fudge. SC did not score until Minter scored on a layup with 3:16 to go in the first quarter. The Lady Wildcats started to show some life in the closing minutes of the first quarter and trailed MC 11-6 by the quarter’s end.

The Lady Bulldogs scored the first three points of the second quarter to take a 14-6 lead. With 3:30 to go, Minter was fouled and made one two free throws to cut MC’s lead to 14-7. Walker then hit a three-pointer and the Lady Wildcats were right back in the game, trailing 14-10 with 2:31 to go in the second quarter.

With a little over a minute to go, Phillips nailed a three-pointer to put SC to within four at 17-13. The two teams traded baskets for the rest of the half. At halftime, SC trailed the Lady Bulldogs 20-15. 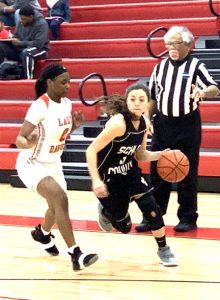 By the 3:46 mark of the third quarter, the Lady Bulldogs had a 24-19 lead. After MC scored two more points, Phillips pulled the Lady Wildcats back to within five on a bank shot. SC had an opportunity to cut into the lead. They had a two-on-one break as Phillips passed the ball to Minter, but Minter missed the layup. With 1:55 left in the third quarter, MC called timeout with a 28-21 lead. Out of the timeout, the Lady Wildcats forced a turnover and Phillips scored on a layup. SC was within striking distance. With 58.6 seconds left in the third quarter, Royal called timeout to regroup his team. Out of the timeout, Minter scored to cut MC’s lead to 28-25 at the start of the fourth quarter.

The Lady Wildcats got off to a great start in the fourth quarter when Minter scored on the inside and was fouled. Minter converted the three-point play, tying the game at 28-28. However, the Lady Bulldogs went on a 7-0 run, prompting Royal to call a timeout with 5:57 left in the game.

Out of the timeout, Phillips buried a three-pointer to cut the deficit to 35-31. Minter had a chance to bring the Wildcats closer and made one of two free throws. The Lady Wildcats scored four unanswered points, including a three-pointer by Phillips to tie the game at 35-35. SC had chances to take the lead, but were unable to score and committed turnovers.

The Lady Bulldogs moved the ball around the perimeter until Fudge was fouled with 2.5 seconds left. Fudge made both free throws to seal the 42-37 win for MC.

The Lady Wildcats have one last regular season game before the Region 4-A Tournament the following week. They will host Hawkinsville (6-18, 5-9) on Friday, February 1, at 6 p.m.