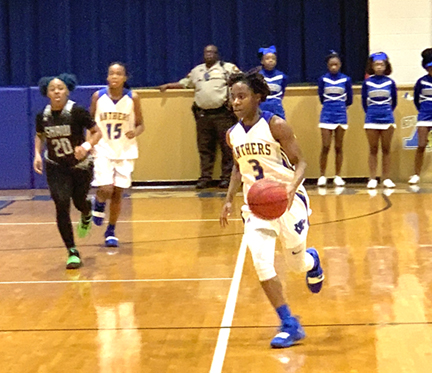 AMERICUS – The Americus-Sumter Lady Panther basketball team came into Wednesday night’s Region 1-AAAA contest against Shaw hoping to avenge a 45-29 loss to the Lady Raiders in Columbus on Tuesday, January 15. They were able to do just that when sophomore guard Nyja Carson drove the length of the floor and scored on a layup in the closing seconds of the game to give the Lady Panthers a hard-fought 46-44 win over the Lady Raiders on Wednesday, January 30, at Americus-Sumter High School.

Both the girls and guys’ games were originally scheduled to be played on Tuesday, January 29. However, bad weather and treacherous road conditions forced the games to be postponed a day later.

“We’re growing up, but we’re still having entirely too many unforced turnovers,” ASHS head coach Sherry Harris said. “I guess as the year goes by, we’ll get better at it. We didn’t lay down tonight. Our girls fought even though we were down by as much as eight points. We stayed in it and stayed after it.” Harris went on to praise the play of junior power forward Brianna Pope. “We got some good play from Pope at one stretch. We fed her the basketball and had her attacking their forwards,” Harris said. “Then we had some key subs that came in and did a great job. That’s always a good thing.”

The Lady Raiders had two players in double-figures. Zykiera Lipscomb led them in scoring with 12 points and Bre’lyn Snipes scored 10. 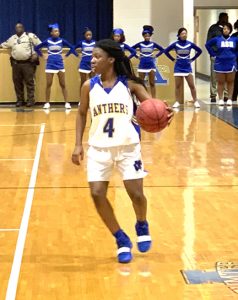 Both teams continued to play at a fast, frenetic pace in the second quarter, but SHS built a 23-12 lead with 5:40 to go before Pope scored to cut the deficit to nine. The Lady Panthers were able to cut their deficit to seven when Goodman grabbed a loose ball, drove to the basket and scored on a layup. At that point, the Lady Raiders called timeout with 4:20 left in the first half.

This began a mini run by ASHS as they were able to cut the lead down to 23-18 with 1:59 left in the half. Then Sims hit a three-pointer, bringing the Lady Panthers to within two at 23-21 by halftime. 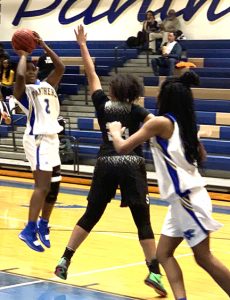 The Lady Raiders expanded their lead to four early in the third quarter when Warner was fouled while shooting and made both free throws. However, Goodman answered with a pull-up jumper to pull the deficit back to two at 25-23. Then Trinity Jackson got an offensive rebound and scored to tie the game at 25-25. Momentum had shifted in the Lady Panthers’ favor. Divine White then drove through the lane and hit a short jumper to give ASHS a 27-25 lead.

The Lady Raiders were struggling to score. They finally got a basket from Maikayla Allen. Allen was fouled and completed the three-point play. At this point, the Lady Panthers led 29-28. SHS continued to miss easy shots on the inside and ASHS was able to take advantage. They fed the ball into Pope, who was fouled while trying a hook shot. However, Pope missed both free throws. 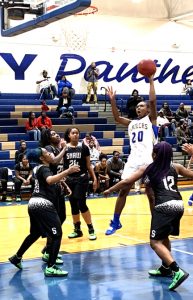 The defense of the Lady Panthers was intense and they were able to force a turnover. Pope made up for the missed foul shots by scoring to give ASHS a 31-28 lead with 1:22 to go in the third quarter.

The Lady Raiders continued to struggle scoring. With 23 seconds left, Pope scored again on the inside to increase the ASHS lead to 33-28 by the start of the final quarter.

However, the Lady Raiders came right back with a three-pointer by Lipscomb to give SHS a 42-40 lead. Lipscomb scored another basket to give the Lady Raiders a four-point lead. This prompted Harris to call a timeout with 2:44 left.

Out of the timeout, the Lady Raiders forced a turnover. However, Natasha Jackson got a steal, drove to the basket and was fouled. Jackson made one of the free throws. Timeout was called with 1:56 left, and the Lady Panthers trailed 44-41.

ASHS used full-court pressure as SHS was inbounding the ball. The Lady Panthers forced a loose ball and jump ball was called, but the possession arrow pointed towards the Lady Raiders. SHS called timeout with the score still 44-41 in favor of the Lady Raiders.

Out of the timeout, the Lady Raiders were fouled, but the one-and-one free throw was missed. The Lady Raiders got the rebound, but Nyja Carson stole the ball and passed it to Natasha Jackson for a layup. The Lady Panthers were within one at 44-43 when timeout was called with 42.5 seconds left in the game. They were able to force a turnover and called timeout.

Out of the timeout, they inbounded the ball to Carson, who drove the length of the floor and scored to give the Lady Panthers a 45-44 lead. The Lady Raiders still had time to score a winning basket, but were unable to as the Lady Panthers got the rebound. ASHS would go on to win 46-44.

The Region 1-AAAA Tournament will take place the following week. Date, time, location and opponent are all to be determined.