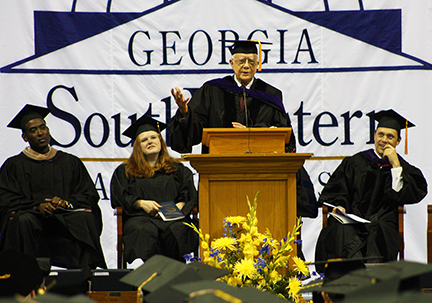 AMERICUS — Georgia Southwestern State University (GSW) plans to honor the legacy of GSW alumnus and former U.S. President Jimmy Carter with the new President Jimmy Carter Leadership Program set to launch in Fall 2019. The program consists of two pathways, an Undergraduate Research Track and a Service Track, that exemplify Carter’s lifetime of leadership in education, politics and community service.
“I have always had a close attachment to Georgia Southwestern, and I am honored to be associated with their new leadership program,” said Carter. “They invested in me as a student over 75 years ago, and I want to do the same for the future leaders in our region. I’m very proud of the partnerships that continue to be made at my favorite college.”
During his time as an undergraduate at GSW in the 1940s, Carter was one of four student leaders chosen to sign their names in the newly poured concrete of the Wheatley Administration Building driveway. Today, Carter’s 1942 signature etching is installed in GSW’s Presidential Plaza alongside a similar etching made by Carter during the Plaza dedication in 2017. In sharing his name with GSW’s new leadership program, Carter is making a permanent impression on countless students in Southwest Georgia.
“With a lifetime of leadership under his belt, it is truly an honor to have President Carter’s support of our new program,” stated GSW President Neal Weaver. “As the only leadership program in the University System of Georgia endorsed by a former president, we believe it is going to strengthen our student’s leadership skills and hone in on their ability to be great leaders here locally, nationally, and even globally … just as President Carter has.”
Guided by the evidence-based “The Social Change Model of Leadership Development,” the four-year Carter Leadership Program allows students to develop their leadership skills both individually and within a group. Students who score a minimum 1100 on the SAT or an ACT composite score of 22, hold a high school curriculum grade point average of 3.0 or greater and have been admitted to GSW are eligible to apply for the program. Additionally, students who hold a leadership role in high school, whether on a sports team, a student club, or community organization, also qualify.
During their first year, students will focus on individual growth and development, working to understand their own beliefs and values. The second year will explore the role of the group, how to build trust with others and how to work collaboratively towards common goals.
In year three, students will choose between the academically-focused Research Track and the service learning-focused Service Track. In the fourth and final year, students will develop a senior research or service project dependent upon their track.
The Carter Leadership Program will provide students with academic scholarships ranging from $1,500 to $3,500 each year they are in the program. The program is made possible thanks to generous support from the Charles L. Mix Memorial Fund, therefore recipients of this scholarship will be known as Mix Scholars.
Lynda Lee Purvis, GSW vice president emerita for Academic Affairs, will serve as the program director, overseeing the operations and managing the details of the new program.
“Lynda Lee’s unique combination of skills, experience and understanding of GSW will serve the program and the university well as we roll out our new leadership program,” said Weaver.
For more information, contact the Office of Recruitment and Admissions at 229-928-1273 or visit www.gsw.edu/CarterLeadershipProgram. The deadline to apply for the program for Fall 2019 admission is March 1, 2019.