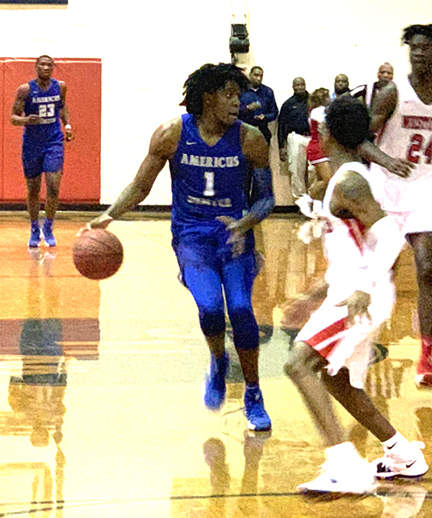 ASHS senior forward Joshua Lusane with the ball against Westover. Lusane scored 15 points to lead the Panthers in the victory. Photo by Ken Gustafson

ALBANY – The atmosphere was like that of a state championship game, except for the fact that it was a region game between two arch rivals. The boys’ basketball game between Americus-Sumter and Westover was just such a game. The outcome was decided in the very last seconds.

With 8.4 seconds left, the Panthers trailed 53-52. ASHS junior shooting guard Quevoluia Willoughby grabbed perhaps one of the most important offensive rebounds of his life. He was fouled on the rebound and made two free throws to pave the way for the Panthers to pull off a 55-53 victory on Saturday, February 2, in front of a raucous, jam-packed, standing-room-only crowd at Westover High School (WHS).

“It’s a big rivalry when we play Westover. It’s one of those games in which both coaches and teams know each other’s players,” ASHS head coach Michael Hoffpauir said. “It just comes down to heart and who wants it more. It also comes down to making some big shots. That was a good test for us in a playoff-type atmosphere. We had a little bit of adversity, but we pulled the win out. We didn’t shoot our best, but we did what we needed to do to get the win.” 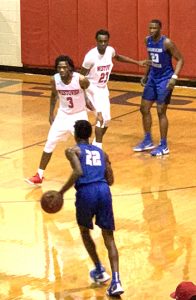 ASHS junior shooting guard Quevoluia Willoughby with the ball for the Panthers. Willoughby made two critical foul shots to lead the Panthers to victory over Westover.
Photo by Ken Gustafson

Willoughby had eight points on the night. He was not the leading scorer, nor did he score in double-figures, but when points were needed most, Willoughby was able to deliver. Up until that point, he had been struggling from the foul line, but he stepped up and made the foul shots when his team needed the most.

Senior forward Joshua Lusane led ASHS in scoring with 15 points. “We played very well tonight,” Lusane said. “We passed the ball well. We missed a lot of shots in the first half, but we kept our heads high. We just kept playing and playing and we got the win.”

The Patriots had three players in double-figures. Jordan Brown led all scorers with 19 points and both Antonio Jackson and Michael Isler each had 10.

The Panthers jumped out to a 6-0 lead, but the Patriots responded with a 5-2 run of their own, capped off by a three-pointer by Michael Cooper. Both teams went back and forth for the rest of the first quarter, but as the horn sounded to end the quarter, Jackson hit a three-pointer to give the Patriots a 13-10 lead.

WHS went on a 12-4 run to start the second quarter, but the Panthers responded with a 10-2 run, capped off with a three-pointer by junior point guard Melton McCoy.

Both teams would go into halftime with WHS leading 31-30. 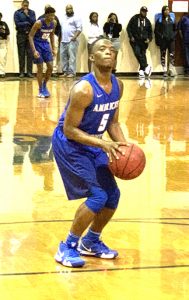 The Patriots outscored the Panthers 13-7 in the third quarter to take a 43-38 lead by the quarter’s end. With ASHS trailing 43-40 in the fourth quarter, Willoughby was fouled and made both foul shots. Both teams traded baskets at that point, but the Panthers got a turnover and Lusane scored on a fast-break layup to tie the game at 46-46 with 4:38 left in the game.

The Panthers had chances at the free throw line to take a four-point lead, but both Willoughby and Brown missed free throws in the closing minutes of the game. However, Willoughby was able to score on the inside to give the Panthers a two-point lead. The Patriots responded with a basket, but Joshua Moore electrified the ASHS fans with a slam dunk to give the Panthers a 50-48 lead in this extremely important Region 1-AAAA contest.

With 1:58 to go, Hoffpauir called timeout to draw up an offensive play. Brown was able to rebound a missed shot and scored to give ASHS a four-point lead. However, Isler was fouled and hit both free throws. Willoughby had another chance to extend the lead for the Panthers, but missed the front end of a one-and-one.

The Patriots took advantage of that when Cooper nailed his second three-pointer of the night to give WHS a 53-52 lead in the closing seconds.

The Panthers had very little time to work for a winning basket. However, Willoughby was able to rebound a missed shot with 8.4 seconds left. Willoughby, who had missed three free throws earlier in the final quarter, now had two chances to tie or put ASHS ahead. He was able to make both free throws to give the Panthers a 54-53 lead.

However, WHS still had 8.4 seconds left, which was plenty of time to get off a good shot considering the number of three-point shooters they had on the floor. However, with one second left, Isler’s baseline jumper was an air ball and was rebounded by Moore. Moore was fouled with 0.3 seconds left. He made one free throw to give the Panthers a thrilling and hard-fought 55-53 victory over their arch rivals.

The Panthers are the #2 seed in the region and will begin play in the Region 1-AAAA Tournament on Thursday, February 7, at Carver (Columbus) High School. Time and opponent are to be determined.