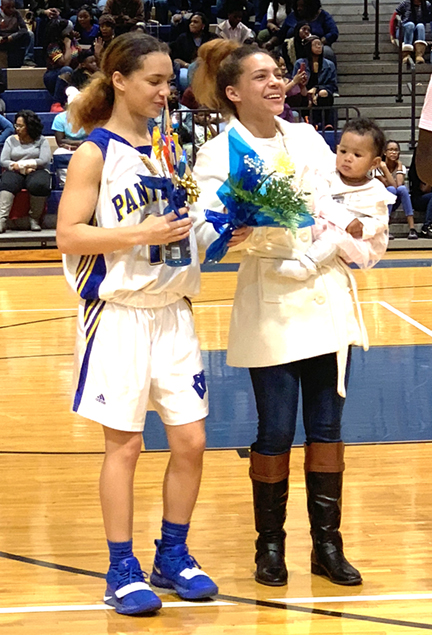 AMERICUS – The Lady Panthers of Americus-Sumter played much better on Senior Night against the Hardaway Lady Hawks than they did the last time these two teams met in Columbus on Friday, January 25. In that game, the Lady Hawks thrashed ASHS 64-36. However, a scoring drought in the third quarter, coupled with some missed layups near the end of the game, turned out to be the Lady Panthers’ undoing as they lost again to Hardaway (HHS) 50-47 on Friday, February 1, at Americus-Sumter High School (ASHS).

ASHS guard Destinee Sims hit three three-pointers in the fourth quarter to bring the Lady Panthers to life, but it wasn’t enough.

“That third quarter really hurt us,” ASHS head coach Sherry Harris said. “We made a run right there at the end. We just missed three point-blank range layups.”

ASHS guard Banita Lee is the lone senior on the Lady Panthers’ squad. Lee, along with the senior cheerleaders, wrestlers and those on the ASHS boys’ basketball team, were honored after the girls’ game had concluded. 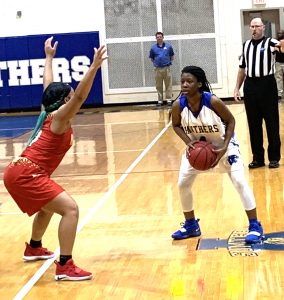 ASHS junior guard Destinee Sims with the ball in the closing minutes against Hardaway. Sims led all scorers with 23 points.
Photo by Ken Gustafson

The Lady Hawks jumped out to a 14-8 lead. This was mostly due to three three-points by McGilberry and one by McKinney. However, the Lady Panthers went on a 5-0 run, thanks in part to a three-pointer by Sims. Sims scored five points in the first quarter. White, Goodman, Pope and Trinity Jackson each scored a basket in the first quarter. By the start of the second quarter, the Lady Panthers were down by just three at 16-13.

In the second quarter, ASHS outscored the Lady Hawks 4-1 in the first couple of minutes to tie the game at 17-17. Then Sims hit another three-pointer to give the Lady Panthers a three-point lead.

The Lady Panthers expanded their lead to 23-18 with under five minutes left in the half.

HHS went on a scoring drought as the Lady Hawks tried to score from the outside. They missed several outside shots during the latter minutes of the half. The Lady Hawks also missed several easy shots on the inside and shot poorly from the foul line in the second quarter (2 for 9).

HHS only scored two points in the second quarter, enabling the Lady Panthers to maintain a 25-18 lead at the half.

Sims scored 11 of her game-high 23 points in the first half. Six of those points came on three-pointers. 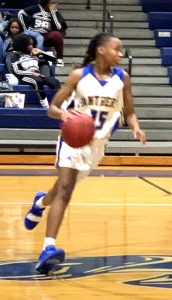 ASHS sophomore guard Nyja Carson pushing the ball up the court against the Lady Hawks.
Photo by Ken Gustafson

HHS scored the first two points of the second half when Jimia Cobb scored on a layup. At that point, the Lady Hawks went on a 13-7 run, capped off by another basket by Cobb. This forced Harris to call a timeout with 3:48 left in the third quarter.

Goodman injected some life in her team by creating a steal and scoring, but McKinney came right back and scored for the Lady Hawks. She was fouled and converted the three-point play to give HHS a 38-34 lead with under 40 seconds left in the third quarter. With just 3.2 seconds left, Sims was fouled while getting an offensive rebound, but missed both free throws.

A disappointing third quarter for ASHS came to an end as the Lady Panthers trailed 38-34.

The Lady Hawks went on a 4-0 run to start the fourth quarter as the Lady Panthers were still struggling to score. With 5:54 to go in the game, HHS coach Kelly Ellison decided to call a timeout. Out of the timeout, McKinney was fouled and made one of two free throws, giving the Lady Hawks a 43-34 lead. After almost three minutes of no scoring from the Lady Panthers, Trinity Jackson received a pass on the inside and scored the first two points of the fourth quarter for ASHS. With 5:13 to go, the Lady Panthers trailed 43-36. Pope scored on the inside to cut the deficit to five.

However, in the closing minutes of the fourth quarter, Sims rose to the occasion. She hit three shots from beyond the arc. The third one brought the Lady Panthers to within one at 48-47.

The Lady Hawks continued to struggle from the free-throw line, but they were able to make two more to give themselves a 50-47 lead.

The Lady Panthers still had time to tie the game, but weren’t able to do so. The Lady Hawks left Americus with a 50-47 win.