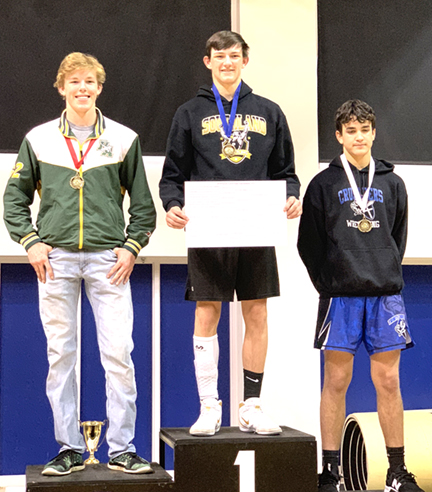 The Raiders finished with a point total of 195 points. They finished almost 38 points ahead of third-place finishers Trinity Christian School-Dublin (158.5) and 63 points behind state champions Bulloch Academy (258).

Though they didn’t finish as team champions, the Raiders did have one individual champion.  Senior Cole Landreth finished his final year as a Raider in style by winning the state championship in the 152-lb. weight class by defeating Riley Joyce of Bulloch Academy in the finals. 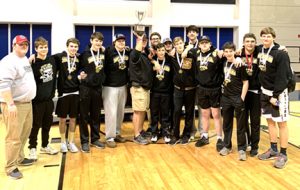 The Southland Academy wrestling team posing for picture with their second-place trophy. The Raiders finished as State Runners-Up for the fourth year in a row.
Photo by Ken Gustafson

Southland Academy (SA) also had an individual state runner-up. Junior Tyler Kennedy made it all the way to the finals of the 170-lb. weight class before falling to Jake Wasdin of Bulloch Academy. Having gotten a bye in the first round, Kennedy defeated Bey Moorman of Valwood and Connor Richards of Gatewood before falling to Wasdin in the finals.

Even though the Raiders didn’t win the team state title, head coach Mike Smith was still very pleased with the outcome. “I think that we competed very well. The brackets weren’t favorable to us in certain weight classes,” Smith said. “Overall, the kids’ effort was awesome. They did a great job. They worked hard. I couldn’t expect any more out of them. We fell a little bit short of first place. That’s disappointing, but we’re glad to have come out as state runners-up.”

For Landreth, conditioning was the main factor in his ability to endure and to win the state title. “Throughout the whole year, I’ve just been focusing on conditioning and technique,” Landreth said. “This year, I’m in the best shape that I’ve ever been in. I had to face a guy from Trinity, and I pinned him in the first round. The next guy, I had already beaten. I just stalled him out the whole match by the score of 6-0, I believe.” The wrestler from Trinity Christian-Dublin (TCS-D) that Landreth was referring to was Kyle Currie. Landreth beat Currie in the semifinals and then defeated Joyce of Bulloch Academy to win the individual state title in the 152-lb. weight class. 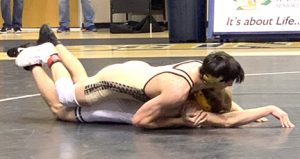 In addition to Landreth and Kennedy, other Raiders turned in strong performances at the state tournament. Eighth Grader Tanner Humphrey finished in third place in the 113-lb. weight class. Humphrey made it all the way to the semifinals before losing to Cole McNair of Trinity Christian School-Dublin (TCS-D). Humphrey overcame that setback by defeating Broc James of Windsor Academy to seal the third-place finish.

In the 285-lb. weight class, Senior Ragan Norman reached the semifinals before losing to Korbett MacGregor of Pinewood Christian Academy (PCA). However, Norman bounced back to earn third place by beating Jesus Gonzalez of BA in the consolation finals. 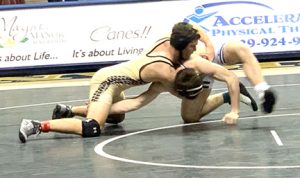 In the 182-lb. weight class, freshman John Saye finished in fourth place for the Raiders. Saye got a bye in the first round, then defeated Cam Huskins of Gatewood in the second round. This put him in the semifinals. However, Saye lost to eventual state champion Porter Faulk of Westfield. Saye defeated Brock Heath of PCA in the consolation semifinals before falling to Matthew Hardy of Valwood in the consolation finals. Nevertheless, Saye still turned in a strong fourth-place finish.

Senior Parker Weldon also finished in fourth place for SA. Weldon competed in the 195-lb. weight class. After getting a bye in the first round, Weldon faced Cross Womack of BA. It was a hard-fought match, but Womack came out on top and would eventually win the individual state championship in that weight class. In the consolation bracket, Weldon defeated Lucas Papadopolous of Valwood. Weldon made it to the consolation finals, but lost to Logan Conner of Piedmont Academy. Nevertheless, Weldon had a strong fourth-place finish.

In the 160-lb. weight class, junior Tyler Joyner finished in fifth place for SA, as did freshman Landon Griffin (126-lb. weight class). Joyner defeated Tim Stoner of PCA in the first round, but lost to Mark Coley of Tiftarea Academy in the second round. Joyner went on to face Chandler Pitman of John Milledge Academy in the consolation semifinals, but lost. This put him in the fifth-place match. Undaunted, Joyner rebounded and defeated Levi Collins of Gatewood to take fifth place in his weight class.

Landon Griffin got a bye in the first round of the 126-lb. weight class. He then faced Harrison Wren of BA. Though he competed fiercely, Griffin fell to Wren, who went on to become state champion. Griffin defeated Austin Hart of Brandon Hall and Koby Bagley of Windsor Academy in the consolation bracket. This put Griffin in the consolation semifinals. Unfortunately, he lost to Chase Cheely of John Milledge Academy (JMA). However, Griffin bounced back in the fifth-place match by beating Carson Martin of Westfield.

Three other eighth graders showed great potential as they turned in strong showings in the tournament. In the 145-lb. weight class, Mitchell Turton finished in fifth place for the Raiders. Turton defeated Damen Sanders of Westfield in the first round before losing to eventual state champion Adam Edwards of Robert Toombs Christian Academy (RTCA) in the second round. Turton was able to get a bye in the first round of the consolation bracket, but lost to David Lester of Creekside Christian Academy in the consolation semifinals. However, Turton bounced back and won the fifth-place match, defeating Bobby Singh of Brandon Hall.

Eighth Grader Keaton Griffin also finished in fifth place in the 120-lb. weight class. After getting a bye in the first round, Griffin defeated JD Caulley of Westfield to earn a spot in the semifinals. However, Griffin lost to Justin Dees of RTCA, which put him in the consolation bracket. Griffin fell to Chase Murphey of BA in the consolation semifinals, but rebounded to take fifth place by defeating Caulley for the second time. 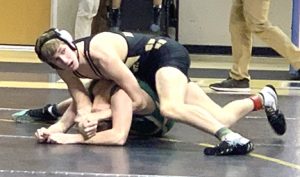 Eighth Grader James Wall also showed potential in the 106-lb. weight class. Though he lost to Thomas Duke of TCS-D in the first round, Wall was a strong competitor in the match. Wall got a bye in the first round of the consolation bracket, putting him in a match against Austin Fosdick of Valwood. Wall competed extremely hard in this match, but Fosdick was able to come out on top. Wall ended up finishing in sixth place in the 106-lb. weight class, but still showed great potential as a wrestler.

Overall, this was once again a fine showing by the Southland Academy Raiders.

ALBANY – The atmosphere was like that of a state championship game, except for the fact that it was a... read more