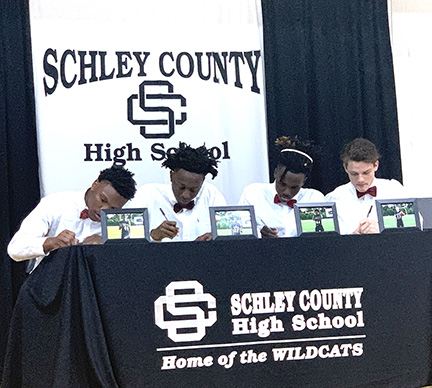 It’s National Signing Day, the day a high school player signs his letter-of-intent to play football at the college of his choice. Some players sign to go play at big-time schools such as Georgia, Georgia Tech, Florida State, Clemson and Alabama just to name a few, while others sign to play at smaller colleges.

Senior punter/kicker Lucas Sellers signed a scholarship to continue punting and kicking field goals for LaGrange College. Sellers was also recruited by Columbus State, but chose to play for the Panthers. Sellers will be majoring in Mathematics and Education and wants to be a Math teacher after graduation. “I’m extremely proud of what he (Sellers) has done for us,” Schley County head coach Darren Alford said. “He didn’t have to do it a lot last year. I’m thankful for that. As a football coach, I’m thankful that we don’t have to use our punter a lot, but when we did, Lucas was solid. He was awesome, and that’s why he is going to be kicking at the next level.” 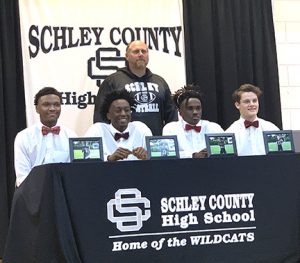 L-R: Tra Sampson, Dartavious Napper, Jakim Hart and Lucas Sellers poisng for a picture after having signed their scholarships to play college football. SC head coach Darren Alford is standing behind them.
Photo by Ken Gustafson

Senior running back Tra Sampson signed his letter-of-intent to play at Georgia Military College. Sampson chose GMC over Limestone College and Fort Valley State University. According to Alford, Sampson rushed for over 1,300 yards as a running back last season, played defensive back and played on special teams. He never came off the field.

“Tra has been one of the most solid young men that I’ve ever coached in my life,” Alford said. “He works hard every day. He comes to work every day. What I talked about when I started this job three years ago was ‘Win today’. I don’t care about yesterday. I don’t care about what’s going to happen tomorrow. None of that stuff matters. All that matters is today. Tra is an ultimate example of that because he comes to work every day and he works hard.”

After his two years at GMC are done, Sampson would like to continue the rest of his college football career at an NCAA Division 1 school.

Senior running back/defensive back Jakim Hart signed his letter-of-intent to play college football at Columbus State University. Coach Alford had high praise for Hart, not just for his play on the field, but also for his character. “At about the midway point of the season, Jakim really came into his own,” Alford said. “He had some tremendous runs. He showed a lot of character because there were some guys in front of him and he waited his turn, but when it got to be his turn, he really, really turned on.”

Hart was also recruited by Middle Georgia State University, but chose to play for the Cougars. “I just liked the vibe of the coaches and the campus,” Hart said. Hart plans to major in Sports Management and would like to become a personal trainer after graduation.

Senior defensive back Dartavious Napper signed his letter-of-intent to play college football at Rheinhardt University (RU). Napper chose RU over Fort Valley State and St. Andrews University. “It’s a small community and they all get along together,” Napper said.

Much focus is centered on players who sign with the big-time programs. However, signing and playing for smaller colleges is just as special. The four young men mentioned above deserve just as much respect and admiration.

Both Raiders and Lady Raiders fall at Brookwood

From Staff Reports THOMASVILLE, GA – After a tremendous Senior Night on Tuesday, January 29, both the Southland Academy Raider... read more