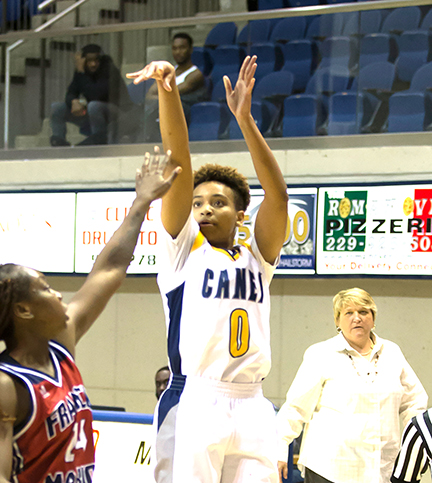 AMERICUS – With six seconds left in the game, Georgia College’s Harper Vick scored to give the Lady Bobcats a 68-67 lead. The Lady Hurricanes had a chance for a winning basket, but Morgan Towells’ layup at the end was missed, giving GC a 68-67 win on Wednesday, February 6, at the GSW Storm Dome.

However, many in the arena felt that Vick should have been called for traveling just before she scored the go-ahead basket, but the call was not made.

The Lady Hurricanes jumped out to an 11-5 lead, capped off by a layup by Tyra Smith midway through the first quarter. GC responded by going on a 7-0 run to take the lead. However, Brianna Perry ended the Lady Bobcats’ run when she scored to regain the lead for the Lady Hurricanes with 3:00 left in the quarter. GSW ended the first quarter leading 17-14.

However, back-to-back turnovers by the Lady Hurricanes led to GC taking a 19-17 lead within one minute into the second quarter. The Lady Bobcats scored again; prompting GSW head coach Kelly Britsky to call a timeout to settle her club down.

The Lady Hurricanes stormed out of the gate to begin the second half by going on a 13-7 run to take a 48-38 lead. Both teams hit free throws near the end of the third quarter, and the Lady Hurricanes led 52-43 going into the final quarter.

In the fourth quarter, GC went on several scoring runs, as they held their own at both ends of the court. They opened up with a 9-4 run to cut GSW’s lead to 56-52 with 6:33 remaining. This prompted a timeout by Britsky so that her club could regroup.

With 12 seconds left, Perry nailed one of two free throws, forcing GC to call a timeout. Vick, who was the Lady Bobcats’ second leading scorer, drained a shot from inside the paint to give GC a 68-67 lead. As time expired, Towells drove to the basket, but her layup was missed at the buzzer partly due to the defense of GC.

The Lady Hurricanes are currently in the midst of a six-game losing streak. They are 8-12 overall and 5-9 in the Peach Belt Conference. GC improves to 9-11 overall and 7-7 in the PBC.

The Lady Hurricanes will try to end their losing streak when they head to the North Georgia Mountains to take on Young Harris College on Saturday, February 9. Tip-off is scheduled for 1:30 p.m.