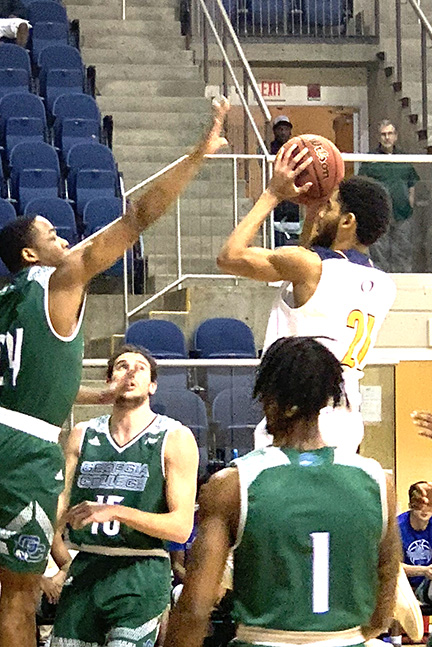 AMERICUS – The Georgia Southwestern State University men’s basketball team came into Wednesday night’s Peach Belt Conference game against Georgia College (GC) needing a win in the worst way. The Hurricanes were embroiled in a 12-game losing streak, having lost a hard-fought game at North Georgia on Saturday, February 2. However, a 7-0 run by the Bobcats in the first half was the beginning of the end as they amassed a lead from which the Hurricanes could not come back from. GC went on to win 73-60 on Wednesday, February 6, at the GSW Storm Dome.

“We dug ourselves a hole in the first half. We were down by 13 at the half,” GSW head coach Ben Hicks said. “I felt like we guarded. We held them to 29 points in the first half of the game, but we struggled scoring. Their zone frustrated us a little bit. It’s the same zone that we see every single day in practice, but we didn’t attack it efficiently.” Hicks went on to say that in the second half, his club made a run, but credited GC for neutralizing that run. “They’re a great team.,” Hicks said. “Anytime you make one mistake, they’re going to make you pay for it. That’s just the Peach Belt Conference as a whole. We just have to do a better job of putting two halves together.”

The Hurricanes were outrebounded 14-6 on the offensive end, which led to 16 second-chance points for the Bobcats. Overall, GC outrebounded GSW 40-27.

“With rebounding, it’s all about wanting to,” Hicks said. “You have to want to rebound. No matter how many drills you do, and we do drill it, you have to want to do it. It’s the same thing in free throws. You can shoot thousands of free throws, but once you get on the court, you have to be mentally tough enough to make the shot. We had 19 turnovers and they scored 19 points off those turnovers and they had 16 second-chance points. That’s because we gave up 14 offensive rebounds. That can’t happen at any level: high school, middle school or college. You just can’t give up offensive rebounds and allow them to convert on them.” 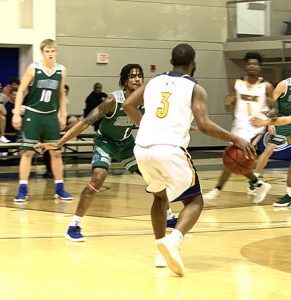 GSW struggled to get back defensively at times. The Bobcats outscored them 11-6 in fast-break points. Another glaring stat in this game was points in the paint. The Hurricanes were outscored 38-20 in that category.

However, another positive note in this game was that the Hurricanes’ bench outscored the GC bench 13-7.

The Hurricanes had two players in double-figures. Quenten Taylor scored 24 points on 8 for 13 shooting, and Devin Watson scored 13 points on 4 of 10 shooting.

GC had three players in double-figures. Jordan Thomas led all scorers with 27 points on 12 of 24 shooting. Chapin Rierson scored 13 points and nearly had a double-double, grabbing nine rebounds. Isaac Thomas did have a double-double for the Bobcats. He scored 12 points and hauled down 12 rebounds in the win.

During the first few minutes of the game, both teams were evenly matched, as the score was tied 6-6 with 12:06 to play. Watson was able to make two free throws to give the Hurricanes an 8-6 lead. 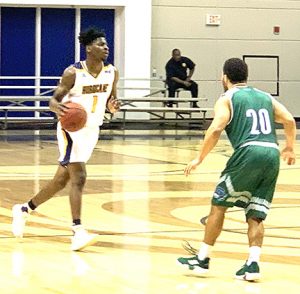 On the Bobcats’ nest possession, the Hurricanes played outstanding defense and forced GC into a shot clock violation. However, the Bobcats got the ball back and Jordan Thomas scored to tie the game at 8-8. Watson responded for GSW by hitting a three-pointer, The Hurricanes had an 11-8 lead with less than 10 minutes left in the first half. GC forward Isaac Thomas came right back and scored on a hook shot to cut GSW’s lead to 11-10 by the time the third media timeout came around with 7:35 to go.

Both teams traded baskets out of the timeout as Andre Statam hit a baseline jumper to give the Hurricanes a 13-12 lead. 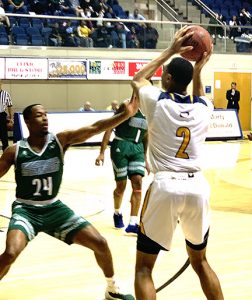 GSW freshman guard Devon Higgs scored two points, dished out one assist and had one steal against the Bobcats.
Photo by Ken Gustafson

The Hurricanes still struggled to score, both on the inside and out. The Bobcats scored again when GSW struggled getting back on defense. GC threw a long pass to a wide-open Wesley Simpson, who scored on a layup.

Watson was fouled and made one of two free throws, ending the long scoring drought for the Hurricanes with a little over one minute left in the half.

The Hurricanes went into halftime down 29-16. 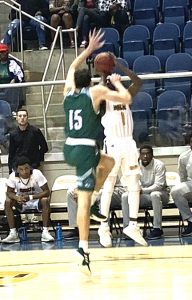 Kohl Roberts got a quick basket for the Bobcats to start the second half, but Quenten

Taylor responded for the Hurricanes. However, Roberts counter-punched with another basket and was fouled. Roberts completed the three-point play, giving GC a 34-18 lead with 18:40 to go.

Both teams traded baskets during the next minute as Taylor scored four GSW, but he Bobcats were able to get an easy basket on the inside to take a 38-22 lead.

Taylor created a turnover and fed the ball to R.J. Sessions, who scored on a fast-break layup. This was just before the first media timeout of the second half. The Hurricanes were still down by double-digits at 38-24, but hope was still alive.

Out of the timeout, Kwei Lartey hit a three-pointer to bring the Hurricanes to within 13. After another GC basket, Sessions scored to keep GSW in striking distance, trailing 42-29.

Watson then scored to cut the Bobcats’ lead to nine at 42-33. Then GC turned the ball over, giving excitement to the Hurricanes’ bench and the fans in attendance. 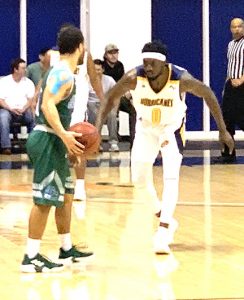 GSW had a chance to cut into GC’s lead when Taylor was fouled. Taylor made both free throws and the Hurricanes were within seven at 42-35. Jordan Thomas scored for GC, but Lartey nailed a three-pointer to bring the Hurricanes to within six at 44-38 with less than 10 minutes left in the game. However, that would be as close as GSW would get.

Jordan Thomas scored again for the Bobcats, but the Hurricanes were only down by eight with 9:15 to play. However, the Bobcats got a three-pointer by Chapin Rierson to put them back up by double-digits. This was followed by another GC basket. Suddenly, the Hurricanes found themselves down by 13 with 7:57 to go.

Two three-pointers by Jordan Thomas and Rierson kept GC’s lead at double-digits. The Hurricanes got a basket by Watson and a three-pointer by Taylor, but still found themselves down 63-48. Grant Howard nailed a three-pointer for GSW, but Thomas struck back for the Bobcats.

The Hurricanes went on a 9-5 run to cut their deficit to 68-57. After a made free throw by GC, Taylor hit another three-pointer to bring the Hurricanes to within nine at 69-60. However, Isaac Thomas was fouled and hit both free throws to push GC’s lead back up to 11.

With 48 seconds left, the Bobcats began to run clock. GSW elected not to foul in hopes of forcing a shot clock violation or getting a rebound. However, with 20.7 seconds left, they scored to salt away the 73-60 lead.

The Hurricanes will try once again to end their losing streak and attain their first PBC win of the season when they travel to Young Harris College on Saturday, February 9. Tip-off is scheduled for 3:30 p.m.