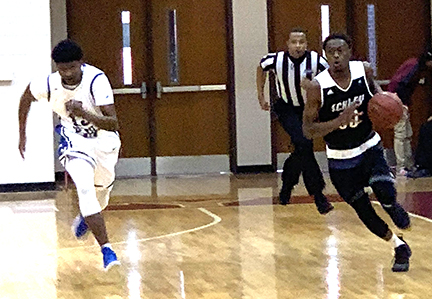 SCHS junior forward JyQuavious Pitts pushing the ball up the court against Manchester. Pitts scored four points in the loss to the Blue Devils. Photo by Ken Gustafson

The Blue Devils used an early 11-3 run in the first quarter as a catalyst to take control of the game. They never looked back on their way to victory.

For the Blue Devils, they were led in scoring by Trae Jackson with 17 points. They had two other players in double-figures. Cam Long scored 12 points and Tylan Hollis chipped in 11.

In the early part of the game, it was an evenly matched affair. with the Blue Devils leading 9-7. However, MHS wen on an 11-3 run to take a 20-10 lead by the end of the first quarter. 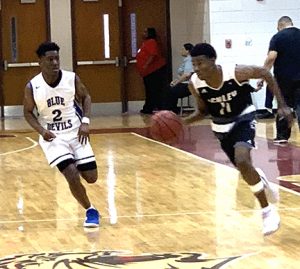 SCHS senior guard Jordan Taylor (11) pushing the ball up the court against Manchester. Taylor scored nine points in the loss to the Blue Devils.
Photo by Ken Gustafson

The Blue Devils kept using their full-court pressure defense to force the Wildcats into committing turnovers. MHS outscored SCHS 13-9 to take a 33-19 lead at halftime. The Wildcats struggled scoring from the field in the first half and they struggled with turnovers.

Walker led the Wildcats in the first half with six points and Taylor had five first-half points, including a three-pointer. The Blue Devils were led in first-half scoring by Jackson with eight points.

The Wildcats struggled in the first few minutes of the third quarter as the Blue Devils continued their intense full-court pressure defense. MHS went on a 9-2 run to begin the third quarter, prompting SCHS head coach Ernest Scott to call a timeout. 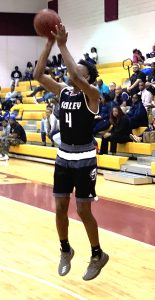 Out of the timeout, the Wildcats made a mini run, capped off by a three-pointer by Ashton Goodin. This prompted a timeout by MHS with 2:33 left in the third. At this point, the Wildcats trailed 42-28.

However, after that timeout, the Wildcats went through a scoring drought and committed turnovers near the end of the quarter. The Blue Devils capitalized on those turnovers with baskets and led 46-28 going into the final quarter.

MHS continued their swarming defensive pressure, disrupting the half-court offense of the Wildcats. However, Trae Sampson got a steal and scored on a fast-break layup for SCHS. Sampson was fouled, but couldn’t complete the three-point play.

Then with 6:38 to go in the fourth quarter, JyQuavious Pitts committed a personal foul, but was also assessed a technical foul for unsportsmanlike conduct. However, the Blue Devils only made one of the free throws. 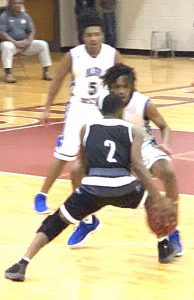 With 5:28 to go, MHS called a 30-second timeout. Out of the timeout, the Wildcats got a steal and a basket by Jackson Fulks to cut their deficit to 47-32. At that point, the Wildcats went on a 5-2 run, capped off by a basket by Hammons. Both teams traded baskets during the next minute, but SCHS was creeping back into the game, trailing 51-40.

However, with 2:10 to go, Hammons fouled Carlos Dixon in the backcourt. Dixon made both free throws to give the Blue Devils a 53-40 lead.

Unfortunately, SCHS was not able to make a last-minute comeback and they fell to MHS 55-42.

The Wildcats will now wait to find out who their first-round opponent will be in the state tournament, as well as when and where the game will be played.

VIENNA, GA – After a thrilling 58-53 overtime victory over Crawford County in the first round of the Region 4-A... read more