Raiders lose to Brookwood in overtime in Region 3-AAA Tournament 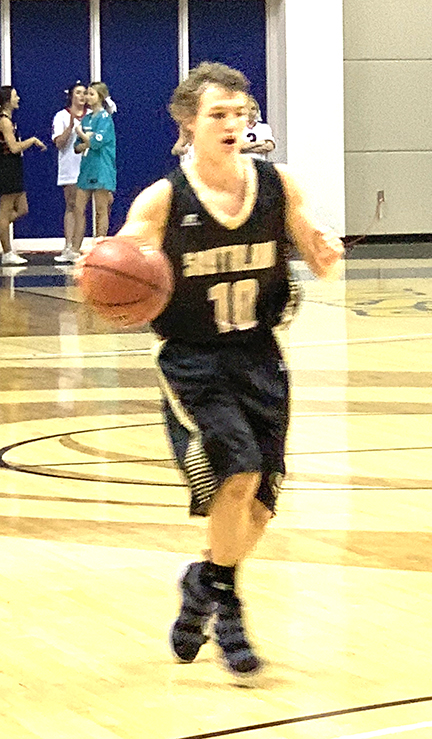 AMERICUS – The game didn’t start until 9:09 p.m. on a school night, but that didn’t make a difference. Both the Southland Academy Raiders and the Warriors from the Brookwood School (BS) were poised and ready to play. It showed as both teams fought it out in a “Battle Royal” which could not be decided in regulation.

Unfortunately for Southland Academy (SA), Max Foster’s three-point attempt at the end of the overtime period was off the mark, and the Warriors escaped with a 57-54 overtime win in the semifinals of the GISA Region 3-AAA Tournament on Thursday, February 7, at the GSW Storm Dome.

The Raiders were in control for most of the game and led by as much as 14 at one time. However, the Warriors went on a 7-0 run in the third quarter to cut the Raiders’ lead down to just two points. That run ended up being a huge factor in the outcome of the game.

The Raiders were led in scoring by Foster with 21 points. Two other SA players were in double-figures. Chandler Studdard and Owen Exley each scored 11 points.

BS was led in scoring by Harrison Owens with 14 points. Kurtis Brown also scored in double-figures with 10 points. 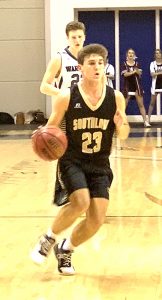 Southland guard Luke Law with the basketball. Law scored two points in the loss to Brookwood.
Photo by Ken Gustafson

With 1:21 to go in the half, Smith was fouled and made one of two free throws. The Warriors were able to cut the lead to 10 when Garrett Ledford found Jacob Atkinson on the inside for an easy layup. Then Sam Barrett nailed a three-pointer as time was winding down to cut SA’s halftime lead to 27-20.

Foster led the Raiders in the first half with 11 points, including three shots from beyond the arc. Adam Smith scored seven first-half points for SA.

Exley scored the first point of the second half at the foul line. Then Luke Law hit a short jumper to give the Raiders a nine-point lead at 32-23.

However, the Warriors went on a 7-0 run, capped off by a three-pointer by Skyler Jones. This prompted SA head coach Rundy Foster to call timeout with 3:55 to go in the third quarter. SA’s lead had been trimmed to 32-30. 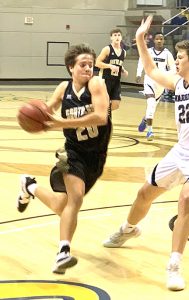 The Raiders got a basket out of the timeout, but BS forward Harrison Owens nailed a three-pointer to cut the Raiders’ lead to 34-33. Owens scored again and was fouled. He was not able to make the three-point play, but the warriors were right on the Raiders’ heels, trailing 36-35. Studdard scored for SA, but the Warriors responded with a basket, prompting another timeout. At this point, SA led 38-37 with 2:07 to go in the third quarter. The Warriors scored the last three points of the third quarter to take a 40-38 lead.

Foster nailed another three-pointer to put the Raiders back in front, but BS responded with a basket of their own. Then Jacob Hilson and Harrison Owens each scored for the Warriors. BS had taken a 46-41 lead with less than five minutes to play in regulation.

The Raiders were struggling with turnovers and offensive rebounding midway through the fourth quarter. By the 4:12 mark, BS led 48-41.

However, Exley drove baseline and scored, getting the predominately pro-SA crowd excited. Then Exley was fouled with less than four minutes left and sank both free throws to cut the Warriors’ lead to 48-45.

With 2:03 to go, the Raiders had the ball. Studdard was fouled and hit both free throws to get SA to within one at 48-47.

On the Warriors’ next possession, they ran several seconds off the clock before they were able to score on the inside with 1:05 left. This prompted Rundy Foster to call another timeout.

Out of the timeout, the Raiders worked the ball around for several seconds before Max Foster drove into the lane, scored and was fouled. Foster completed the three-point play to tie the game at 50-50. With 17.8 seconds left, the Warriors called timeout to set up a winning shot. Would they wait until five seconds to try to score with no shot clock? The answer was yes, but the shot was missed with four seconds left. The Warriors had another chance to win it in regulation, but JP Chapman’s baseline shot at the buzzer was off the mark. The game would go into overtime. 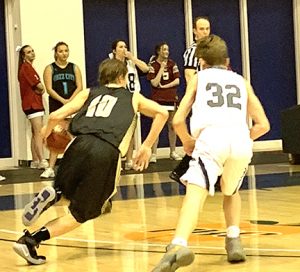 Foster scored the first points of the overtime period to give SA a 52-50 lead, but the Warriors responded with a tying basket. SA responded as Studdard grabbed multiple offensive rebounds and finally scored, but BS struck back when Jack Boltja nailed a three-pointer to give the Warriors a 55-54 lead.

With a one-point lead and no shot clock, the Warriors moved the ball around for several seconds until Atkinson was fouled. However, he missed the front end of a one-and one, and the Raiders rebounded.

After another timeout by SA, Foster tried a three-pointer that was off. The Warriors rebounded and called timeout with 28.3 seconds left in the overtime period. They still led 55-54.

Out of the timeout, BS ran the clock down to 12.1 seconds until Chapman was fouled. He would shoot one-and-one. Chapman made the first free throw, after which SA called timeout.

Out of the timeout, Chapman made the second free throw, giving BS a 57-54 lead. The Raiders moved the ball up the court to get a tying three-pointer, but Foster’s three-point attempt at the buzzer was no good. BS escaped with a 57-54 victory in overtime.

Even though the loss was extremely disappointing, by virtue of their 61-50 win over Valwood at Tiftarea Academy in the region play-in game on Tuesday, February 5, the Raiders are assured of a berth in the GISA AAA State Tournament. They will play in the region tournament’s third place game against Deerfield-Windsor on Friday, February 8, at the GSW Storm Dome. Tip-off is scheduled for 5:30 p.m. The Raiders will go into the state tournament as either the third our fourth seed out of Region 3.