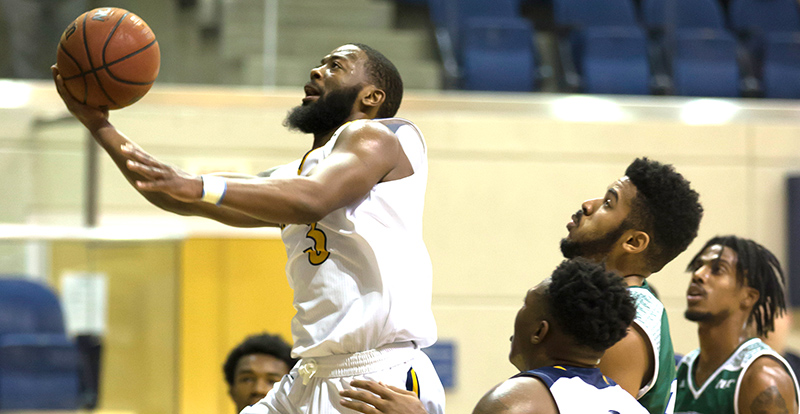 GSW senior guard Quenten Taylor going up to score in a previous game. Against Columbus State, Taylor scored a career-high 35 points in the double-overtime loss. Photo by GSW

AMERICUS – The Georgia Southwestern State University men’s basketball team had just come off of a liberating 73-71 victory at Young Harris College on Saturday, February 2. That win ended a 13-game losing streak for the Hurricanes. They were ready to take that momentum into Wednesday night’s game against Columbus State.

Two 20-minute halves of basketball, along with one overtime period, couldn’t decide the outcome. GSW senior guard R.J. Sessions hit a three-pointer with 0.3 seconds on the clock to send the game into its first overtime, but the Cougars ended up edging out the Hurricanes in the second overtime and winning the game 106-103 at the GSW Storm Dome on Wednesday, February 13.

Quenten Taylor led the Hurricanes with 35 points; a career high for the senior guard from Edison, GA. Taylor was 12 of 16 from the field, including 4 of 5 from beyond the arc and 7 of 8 from the foul line. He also tallied six assists and four steals.

The Hurricanes found themselves down 40-33 at halftime and trailed throughout the second half until Sessions hit the shot to send the game into overtime.

GSW never let the deficit get beyond 11 points, but they trailed by 10 with less than three minutes remaining.

With four seconds to go in regulation, Lartey was fouled on a successful put back, but missed the free throw to complete the three-point play. However, the ball was deflected out to Sessions, who then hit the tying three-pointer to send the game into extra time.

It was a back-and-forth affair between both teams during the first overtime. Jalen Thomas scored the final points of the first overtime when he tied the game at 95-95 with a three-pointer with 25.4 seconds left. The Hurricanes played for the last shot, but didn’t get a clean look, forcing the game to go into a second overtime.

In the second overtime, CCU’s Bryant Givens scored and converted a three-point play. That would be enough for the Cougars to seal the double-overtime win.

The Hurricanes will do the only thing they can do: get right back up and try again. They will host the University of South Carolina Aiken on Saturday, February 16, at 3:30 p.m. It will be the second of three straight home games for GSW.