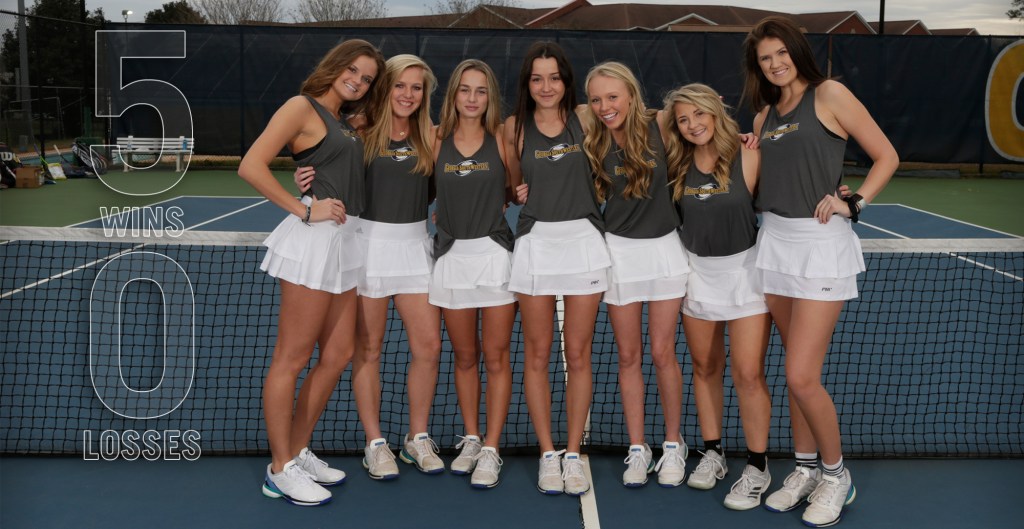 The Georgia Southwestern State University women’s tennis team is off to their best start in school history with a record of 5-0. Photo by GSW

AMERICUS – The Georgia Southwestern State University women’s tennis team continued its historic start to the 2019 season with its fifth conference win: a 5-2 victory over Reinhardt University on Wednesday, February 13, at the Susan K. Smith Tennis Complex.

The undefeated Lady Hurricanes are off to their best start in school history since joining the NCAA ranks in 2007. Hannah Hogg and Maria Taboada led GSW with wins in both singles and doubles competition.

On the men’s side, the Hurricanes suffered a 7-0 loss to a Reinhardt team that entered the spring ranked No. 5 in the nation in the NAIA Top 25 poll.

Both teams travel to Tuskegee University on Friday for noon matches.

GSW split the doubles matches played at No. 1 and No. 2 and earned the team point with a default at No. 3. Taboada and Celia del Castillo secured the doubles point with a 6-2 win over Angie Laparol and Albane Queinnec at No. 2.

In men’s competition, the Hurricanes’ lone win of the day came in doubles competition where Beau Millwood and Nacho Garcia de Sola won in a tiebreaker at No. 2 by the scores of 7-6, 7-5 over Myohn Miranda and Bruno Juarez. The No. 3 GSW duo of Matthew Limyadi and Kyle Eason fell just shy of getting the Hurricanes a team point as they suffered a 7-5 loss at No. 3.