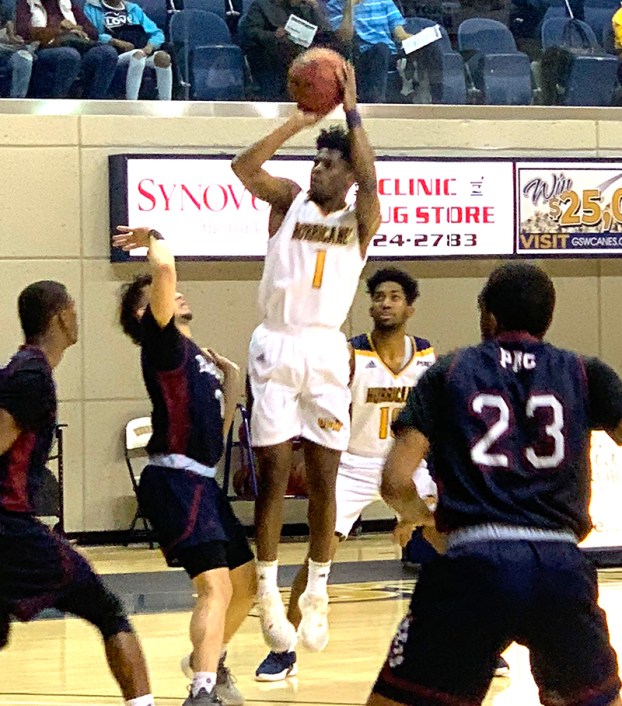 Hurricanes give gallant effort in loss to USC Aiken

AMERICUS – The Georgia Southwestern State University men’s basketball team was coming off a tough double-overtime loss to Columbus State on Wednesday, February 13. Having won three games all year, the Hurricanes desperately needed a win. They would have to earn it against the No. 6 ranked team in the country: the Pacers of the University of South Carolina Aiken. GSW battled valiantly against the Pacers, but came up on the short end by the score of 96-89.

GSW falls to 3-20 overall and 1-16 in the Peach Belt Conference. However, the Hurricanes are not playing like a team with only three wins on the season. They are playing much better than that. They are just constantly coming up on the short end against teams in one of the toughest basketball conferences in NCAA Division II: the Peach Belt Conference. In addition to the Pacers, two other PBC teams are ranked in the NCAA Division II men’s top 25 poll: No. 21 ranked UNC Pembroke and No. 25 ranked Francis Marion University. 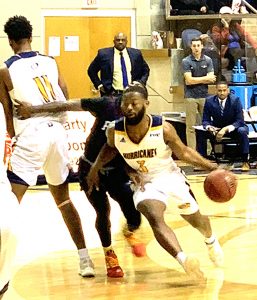 GSW senior guard R.J. Sessions had a fantastic game for the Hurricanes. Sessions led all scorers with 26 points on 10 of 21 shooting. He nailed six three-pointers, grabbed four defensive rebounds and had one steal. Senior guard Kwei Lartey also had a great game for GSW. Lartey scored 21 points on 6 of 13 shooting. He hit 2 of 5 three-point attempts and shot a perfect 7 for 7 from the foul line. Three other players were in double-figures for the Hurricanes. Senior guard Devin Watson scored 17 points on 6 of 7 shooting. Watson made 3 of 4 three-point attempts and shot 2 of 4 from the foul line. Freshman forward Jamari Dean scored 12 points and senior point guard Quenten Taylor scored 11.

The big problem for GSW in this game was interior defense. They gave up 68 points in the paint to the Pacers. USC Aiken also outscored GSW 13-2 in second chance points. That was a huge factor in the game.

“We did a bad job of guarding them in the paint,” GSW head coach Ben Hicks said. “They are a team that lives and dies by the three-point shot. I thought we threw them off with our 1-3-1 defense. They had no answer for that, but they just started driving and we didn’t guard them well. I’m proud of our guys for competing. I feel bad for them. Against a Peach Belt Team, if you make one or two mistakes, it will cost you every single time. We just have to keep fighting. That’s what I’m preaching. Our seniors are showing great leadership. They bring it every day in practice.” 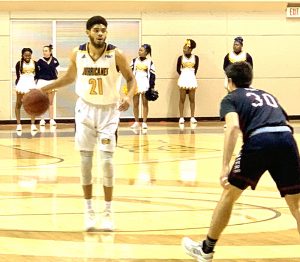 The Pacers jumped out to a 13-3 lead early, but Quenten Taylor stepped up and hit a three-pointer. Both teams traded baskets for the next few minutes. With the Hurricanes down 19-13, Devin Watson nailed a three-pointer just before the 12-minute media timeout.

However, the Pacers scored four straight points out of the timeout to take a seven-point lead. With less than 10 minutes left in the half, Shaquan Jules followed up a missed shot and scored to give the Pacers a 25-17 lead.

However, the Hurricanes would not quit. Sessions nailed a three-pointer to bring GSW to within five at 25-20. Sessions scored again on the inside to cut the deficit to 25-22. The Hurricanes were fighting toe-to-toe with the No. 6 ranked team in the country. 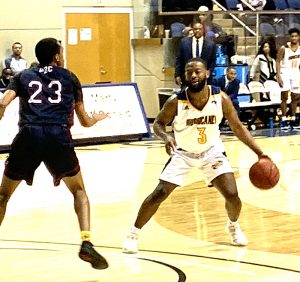 However, the Pacers responded with three-straight points, capped off by a drive and score by Ty’lik Evans. Kwei Lartey responded with a three-pointer to put the Hurricanes back to within three. Then Watson scored to tie the game at 28-28. However, the Pacers fought right back with four straight points to take a four-point lead. GSW responded as Lartey scored, was fouled and completed the three-point play. Then Jamari Dean that got a steal and scored on a one-handed slam-dunk to give GSW a 33-32 lead.

After a media timeout, the Hurricanes got the ball back and Taylor was fouled. Taylor made both free throws to give GSW a 35-32 lead with a little over three minutes left in the half.

However, USC Aiken responded when Evans dumped the ball into Robert Hill, who dunked the ball for two to bring the Pacers to within one at 35-34. There were several lead changes during the rest of the first half between both teams. It was like a boxing match between two heavyweights as halftime neared. With 10 seconds left, Sessions hit another three-pointer. USC Aiken scored just before the half ended, but the Hurricanes, having won only three games all year, were leading one of the best teams in the country at halftime 42-40.

Sessions led the Hurricanes in first-half scoring with 12 points and Devin Watson scored 10. Watson was 3 of 4 from beyond the arc while Sessions was 2 for 5.

Both Robert Hill and Doniel Dean led the Pacers at the half with eight points.

Evans scored the first points of the second half to tie the game at 42-42. However, Lartey drove to the basket and was fouled. Lartey made both free throws to put GSW back in the lead.

Barmore nailed a three-pointer to put the Pacers up 45-44. He then scored again. However, Sessions came back with a three-pointer to tie the game. Each team kept scoring on each possession. With 17:21 to go in the game, the score was tied 49-49. Both teams continued to trade baskets for the next minute and a half until timeout was called with 15:22 left. At that point, USC Aiken led 55-53. 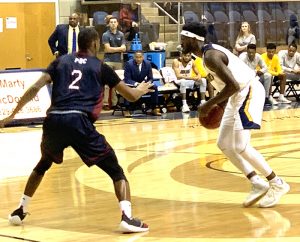 However, out of the timeout, Sessions nailed another three-pointer to put GSW up 56-55. The Pacers responded by scoring four straight points until Lartey nailed a three-pointer to tie the game at 59-59. USC Aiken responded with a basket, and timeout was called with 13:26 to go.

The Pacers got another basket on a basket interference call against the Hurricanes. Evans was fouled on the play and made the free throw. Dean then scored for USC Aiken to give them a 66-59 lead with 12:21 to go.

With 11:08 to go, Lartey scored on the inside to cut the Hurricanes’ deficit to 68-61, but the Pacers responded with another basket to push their lead back up to nine.

With 6:42 to go, the Hurricanes tried to stay in it when Lartey scored on the inside. USC Aiken responded with a basket, but Sessions scored five straight points to bring the Hurricanes to within three at 78-75 with a little over five minutes to go.

Jamari Dean was able to score on the inside for GSW and was fouled. Dean made the free throw to tie the game at 78-78. This prompted USC Aiken head coach Mark Vanderslice to call a timeout with 5:11 to go.

Out of the timeout, the Pacers scored four straight points. USC Aiken’s Doniel Dean was called for his fourth personal foul, and Lartey was able to make both free throws to cut the Pacers’ lead to 82-80 with 3:46 to go.

Robert Hill was fouled on the Pacers’ next possession and went to the free throw line. Hill made the first of a one-and-one, then made the second.

Dean then put the Pacers back up by six with a jump shot, but Taylor responded with a basket to keep GSW within four. However, Evans nailed a three-pointer to put the Pacers up 89-82.

However, the Hurricanes would not quit. Sessions hit another three-pointer to bring the Hurricanes back to within four at 89-85 with 1:54 left in the game.

However, Barmore responded by scoring two straight baskets for the Pacers. This began a run from which the Hurricanes could not overcome, and No. 6 ranked USC Aiken (22-2, 16-2 PBC) went on to win 96-89.

The Hurricanes won’t have to wait long to try to earn another win. They host the Bearcats of Lander University on Monday, February 18, at 7:30 p.m.

Lusane takes over in third quarter to lead Panthers to victory