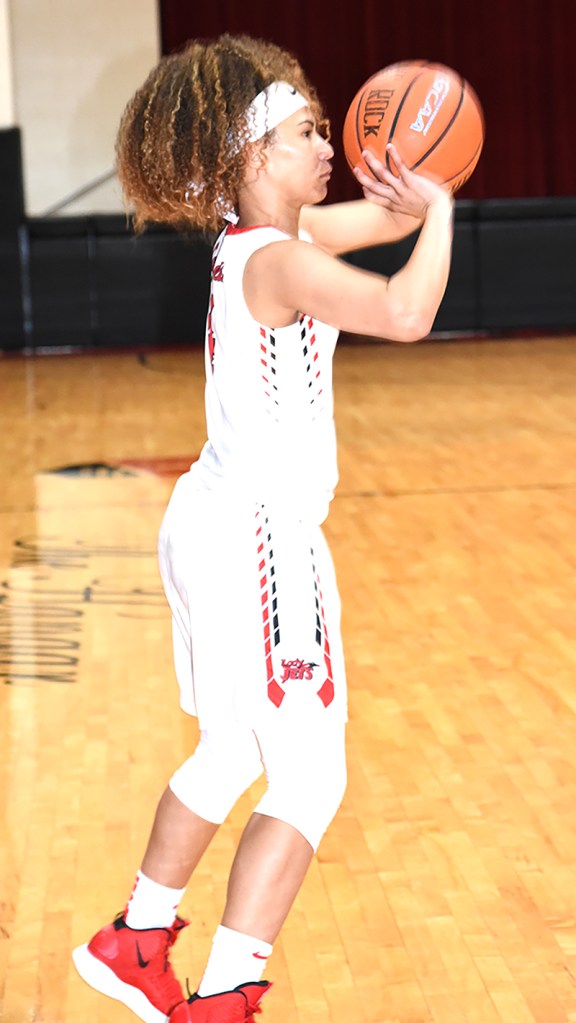 SGTC sophomore guard Alyssa Nieves shattered the school record for number of three-pointers made in a career (149). That destroys the previous record set by Alice Holmes, who played for the Lady Jets from 2006-2008. Her record was 116. She made 5 of 7 three-point attempts against SCTC. Photo by SGTC

The Jets followed that up with a 68-49 victory over the Tigers and move into third place in the GCAA as a result.

“Obviously, we are excited about winning the conference because that gives us the opportunity to host the NJCAA Region XVII Tournament,” SGTC women’s head coach James Frey said. “This is just the first step to our ultimate goal. We have to win the NJCAA Region XVII Tournament to get to the District J play-in game before we earn the right to advance to the NJCAA Division I National Tournament. We still have a lot more hoops to jump through to get to our ultimate goal of playing for a national championship.”

As the GCAA Conference Champions, the Lady Jets will host the semi-finals and finals of the Region XVII Tournament on Friday and Saturday, March 1-2.

Sophomore guard Alyssa Nieves shattered another school record. She set a new record for most three-pointers in a career. The old record was 116 set by Alice Holmes from 2006-2008.

Nieves was 5 of 7 from beyond the arc in the game and is still the league leader in three-point percentage shooting at 46.5 percent. Nieves now has 149 made three-pointers in her career at SGTC. 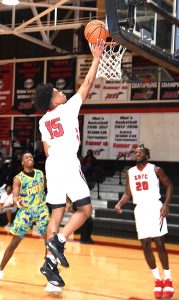 Toriano Lewis, 15, led the Jets in scoring with 16 points. He had a perfect night shooting six of six from the field and four of four from the three-point line.
Photo by SGTC

Both Nieves and sophomore forward Fatou Pouye each scored 26 points to lead the Lady Jets. Pouye also grabbed 10 rebounds, earning herself a double-double.

On the men’s side, the Jets defeated SCTC 68-49 and are now in third place in the GCAA standings.

“We are in a good position right now,” SGTC men’s head coach Travis Garrett said. “We have only one more loss than Central Georgia Tech and Georgia Highlands and we have four more conference games at home. If we play well, we have a chance to move up and we should host at least a playoff game and possibly the end of the season tournament.”