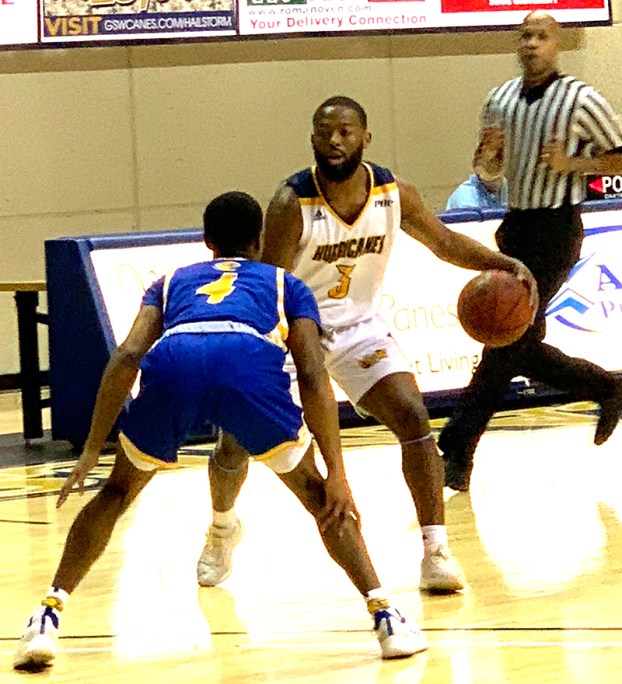 GSW senior guard Quenten Taylor (3) scored 18 points to lead the Hurricanes and nearly tied the game on a three-point attempt at the horn. Photo by Ken Gustafson

Americus – It came down to the final seconds. The Hurricanes trailed Lander University (LU) 85-82 with 10.1 seconds left. They had a chance to tie the game and send it into overtime. Unfortunately for GSW, senior guard Quenten Taylor’s three-point attempt went halfway down into the basket and came out. As a result, the Bearcats (11-14, 10-9 PBC) handed the Hurricanes a heartbreaking 85-82 loss on Monday, February 18, at the GSW Storm Dome.

“I told my guys after the game that in this league, in order to win, you’ve got to put two halves together,” GSW head coach Ben Hicks said. “It’s almost like if the other team plays hard, we play hard. If they want to play relaxed, we play relaxed. We allowed them to dictate the tempo of the game.” Coach Hicks went on to say that his team gave up 25 points off turnovers, which, in his opinion, was the difference in the game.

This was a heartbreaking loss for GSW. Down by 16 at one point, they went on a 17-2 run in the second half to scratch and claw themselves back into the game, but came up short once again. Unfortunately for the Hurricanes (3-21, 1-17 PBC), this has been the theme of their season. They have fought their hearts out to try and get wins, but just haven’t been able to get over the hump. They have lost eight games this season by five points or less. 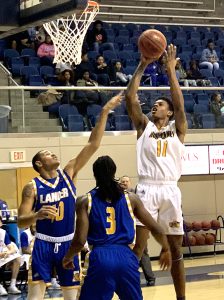 GSW freshman guard Jamari Dean goes up for a shot against Lander University. Dean scored nine points in the loss to the Bearcats.
Photo by Ken Gustafson

GSW had four guys in double-figures. Taylor led the Hurricanes in scoring with 18 points. He was 5 for 12 from the field and a perfect 6 for 6 from the foul line. Freshman guard Grant Howard scored 17 points. Senior guard Kwei Lartey scored 15 and senior guard R. J. Sessions chipped in 11.

For LU, former Macon County standout Marquel Wiggins led the Bearcats in scoring with 23 points. He also grabbed 10 rebounds to post a double-double.

Two other Bearcats scored in double-figures. Both Elijah Austin and Sidney Robinson each scored 13 points.

Both teams were fairly even in most categories except for one. The Bearcats scored 42 points in the paint, while the Hurricanes scored 26. The Bearcats turned the ball over 16 times and GSW scored 24 points off those turnovers. On the other hand, GSW committed 13 turnovers and LU scored 25 points off GSW turnovers. 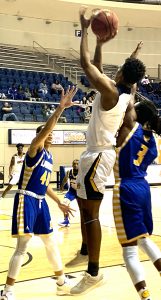 GSW’s Jamari Dean goes up for a shot while being guarded by two Lander defenders.
Photo by Ken Gustafson

It was a back and forth affair between both teams before Taylor hit a three-pointer to give the Hurricanes a 10-8 lead. However, Wiggins scored five straight points to give the Bearcats a 13-10 lead with 13 minutes to go.

LU increased its lead to 18-10 before Sessions scored off a pass from Howard. GSW freshman guard Jamari Dean then scored to cut the Hurricanes’ deficit to 18-14.

The Bearcats scored four straight points to take an eight-point lead until Howard hit a long two-pointer to bring GSW to within six by the 10:25 mark of the first half.

With a little over nine minutes left in the half, GSW junior guard Jalen Rutherford was fouled and made one of two free throws for the Hurricanes to cut the deficit to seven. Howard would later score to cut the Bearcats’ lead to 23-19. Then Lartey hit a three-pointer to bring GSW to within one at 23-22 with a little over eight minutes to go. Both teams traded baskets within the next minute. Timeout was called with 7:21 to go in the first half, and GSW was trailing LU 25-24. 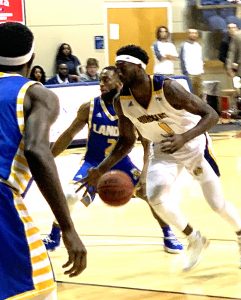 The Hurricanes took the lead on a layup by freshman guard Devon Higgs. However, two straight turnovers by the Hurricanes resulted in two straight baskets by the Bearcats. This began a 9-0 run by LU. At this point, Hicks called a timeout to get his club to settle down and regroup. Lander led 34-26 with 5:19 to go in the first half. This proved to be a crucial turning point in the game, as the Hurricanes would have to play catch-up the rest of the way.

Lartey got the Hurricanes back on track with a three-pointer and brought GSW to within five. A turnover by the Bearcats gave the Hurricanes a chance to further cut into the lead. They did just that when senior guard Devin Watson drove to the basket and scored.

After a basket by LU, Lartey hit a jumper to keep the Hurricanes within three at 36-33 with less than three minutes left. However, Wiggins hit a jumper to put the Bearcats up by five again.

With 1:24 to go in the first half, a technical foul was called against LU’s DeShundre Rucker. Sessions hit both technical foul shots to cut the lead to 38-35. However, Elijah Austin hit a three-pointer for the Bearcats and was fouled on the play. Austin made the free throw to give the Bearcats a seven-point lead. LU scored another basket just before halftime to gain a 44-35 lead at the half.

Lartey was fouled while shooting to start the second half and made both free throws, but the Bearcats responded with three points to go up 47-37.

This began an 8-3 run by LU to start the second half. They had taken a 52-38 lead with 17:32 to go. Dean was fouled while shooting and made both free throws to bring GSW to within 12. Grant Howard then drove to the basket and scored to bring GSW to within 10, but Jordan Dingle responded with a three-pointer to put the Bearcats up 55-42.

The Hurricanes would not go away, however. Watson nailed a three-pointer to bring GSW back to within 10 points. At this point, the first media timeout of the second half came with 15:11 to go in the game. 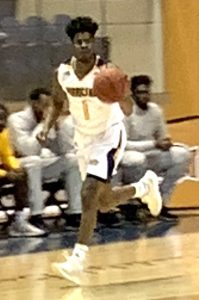 GSW senior guard R.J. Sessions scored 11 points and made 3 of 4 foul shots in the Hurricanes; loss to Lander.
Photo by Ken Gustafson

The Bearcats went on a 5-2 run coming out of the timeout, capped off by a three-pointer by Dingle. This gave a LU a 60-47 lead. The Bearcats scored three more points before Lartey hit a three-pointer, followed by a basket by Higgs. Grant Howard then scored to complete a 7-0 GSW run before LU head coach Ryan Hillburn called a timeout with 11:41 to go. The Hurricanes had pulled themselves back to within nine, trailing 63-54.

Wiggins scored on the inside for LU, but Taylor struck back with a three-pointer to cut the deficit to four at 72-68.

Wiggins was fouled and made both foul shots, but Sessions struck back with a three-pointer. It was a boxing match between both teams as each team was scoring on almost every possession. However, Wiggins continued to score for the Bearcats, and Lander took a 79-71 lead with less than five minutes left.

With 3:58 to go, Taylor scored to bring the Hurricanes to within six at 79-73 when timeout was called.

With 3:02 to go, the Hurricanes trailed 81-75 before they forced a turnover and Sessions scored on a layup. This prompted a timeout by LU with 2:35 to go. They were leading 81-77. Sessions tried a jump shot and was fouled. He made the first free throw, but was called for a lane violation, which nullified his second attempt. After a basket by the Bearcats, Taylor was fouled while shooting and made both free throws, making the score 83-80 LU.

Higgs was whistled for his fourth personal foul and Sidney Robinson went to the line for the Bearcats. Robinson missed both free throws, giving GSW a golden opportunity to get to within one point or tie the game. Taylor drove to the basket and was fouled. He made both free throws to bring GSW to within one at 83-82 with less than 30 seconds left.

The Bearcats got the ball inside to TJ Knight, who was fouled. Knight made both free throws to give LU an 85-82 lead. With 17.1 seconds left, Watson advanced the ball across half court and called timeout with 10.1 seconds left. It was time for Hicks to draw up a play to tie the game and send it into overtime.

Out of the timeout, Taylor drove towards the baseline and put up a three-pointer at the horn. The ball went halfway down but came out. The Bearcats escaped with an 85-82 win.

The Hurricanes will try once again to get that elusive fourth win of the season when they travel to St. Augustine, FL to take on the Saints of Flagler College. The last time the two teams met in Americus on Wednesday, January 23, Flagler came away with a 78-60 victory. Tip-off for Wednesday night’s game is scheduled for 7:30 p.m.