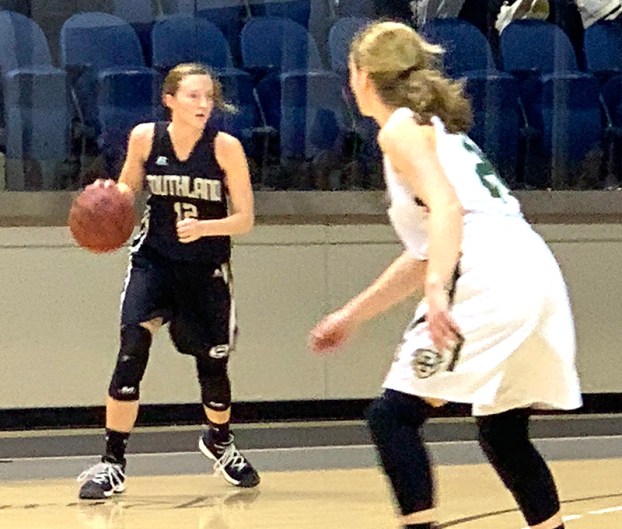 AMERICUS – The GSW Storm Dome was almost filled to capacity as the Southland Academy Lady Raider basketball team faced last year’s state runners-up: the Lady Cougars of Holy Spirit Prep (HSP) in the second game of the GISA Class AAA State Semifinals. The crowd was almost entirely made up of Southland supporters ready to celebrate a victory on Thursday, February 21. The Lady Raiders had the home-court advantage. The last time SA had won a state championship in girls’ basketball was 1986. The Lady Raiders set out to end that 24-year drought. Unfortunately, the Lady Cougars had too much firepower. They hit 10 three-pointers and stifled the SA offense on their way to a 60-32 win, ending SA’s remarkable 21-5 season.

SA had two players in double-figures. Macy Williams and Holly McCain each scored 11 points, while Maddie Crisp had six points. Sydney Payne scored four points to round out the Lady Raiders’ scoring.

“Our girls always give us effort. There’s no doubt about it. I couldn’t be prouder of them,” SA head coach Ty Kinslow said. “They did a wonderful job for us this year. You just have to tip your cap to Holy Spirit Prep. They’ve got a great team. They have a lot of girls that play year-round. They knocked down a lot of shots. They were a little bigger and stronger, but our girls did a great job. It has been a long time since our girls have won region. It’s been a long time since we’ve been in the final four. “

Kinslow went on to praise the girls for how they conduct themselves off the court as well. “More than basketball, we’ve got a lot of fine young ladies who are going to do great things in life,” Kinslow said. “No matter what, when we’ve been down and we’ve faced adversity, they just keep battling until the final horn and they never quit. We couldn’t be more proud of them.” 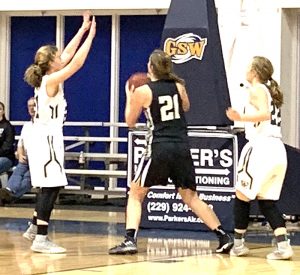 Though they gave tremendous effort in this game, the Lady Raiders struggled with the bigger and stronger HSP team. SA missed a lot of shots, both inside and out. However, just about every shot was challenged by the Lady Cougars, making it difficult for the Lady Raiders to score.

The Lady Raiders shot the ball extremely well from the outside and on the inside. HSP had four players in double-figures. Ashley Postell led the Lady Cougars with 15 points. Annaleena Hanson scored 14 and both Kristen Roche and Kemia Ward each scored 12 points. Hanson scored 12 of her 14 points on three-pointers. Laila Baker also scored nine points, all of them in the first half.

The Lady Cougars jumped out to an 11-0 lead to start the game. This put the Lady Raiders in a difficult position early in the game. It was a position from which they would not be able to recover. Sydney Payne scored the first two points for the Lady Raiders when she made two foul shots. Crisp then scored to cut the deficit to seven, causing the large pro-Southland crowd to roar with approval.

However, the Lady Cougars went on a 5-0 run to close out the first quarter, leading 16-4.

Macy Williams hit a three-pointer to start the second quarter to bring SA to within nine, but HSP scored four straight points to push their lead to 20-7.

For the next minute or so, the Lady Raiders were struggling to score until McCain scored on the inside and was fouled. McCain made the free throw to cut the Lady Cougars’ lead to 20-10. However, HSP scored four unanswered points, capped off by a steal and score by Roche. This prompted a timeout by Kinslow to settle his club down. 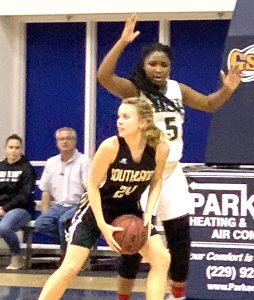 Both teams traded baskets out of the timeout, but Roche hit a three-pointer to extend the HSP lead with less than two minutes left in the half. With 1:26 to go, McCain was fouled and went to the line. She made both free throws to cut HSP’s lead to 27-14.

Then with a little over 30 seconds to go, Roche scored again for HSP, but Williams responded by drawing a foul on the inside. Williams hit both free throws to bring SA to within 13 at the half. They trailed 29-16.

HSP went on a 7-2 run to start the third quarter. Then McCain scored on the inside to cut the deficit to 36-20. However, HSP guard Annaleena Hanson hit a jumper and a three-pointer to push the Lady Cougars’ lead to 42-20. Hanson struck again for another three-pointer with less than three minutes to go in the third quarter. Williams responded for SA with two straight baskets to cut the deficit to 45-24, which got the crowd back into the game. With a little over 30 seconds to go, Payne intercepted a pass and scored on a fast-break layup to cut SA’s deficit to 47-26 at the end of the third quarter. SA had eight minutes left to mount a huge comeback to put themselves into the championship game.

Unfortunately for SA, they weren’t able to stop the onslaught of the Lady Cougars.