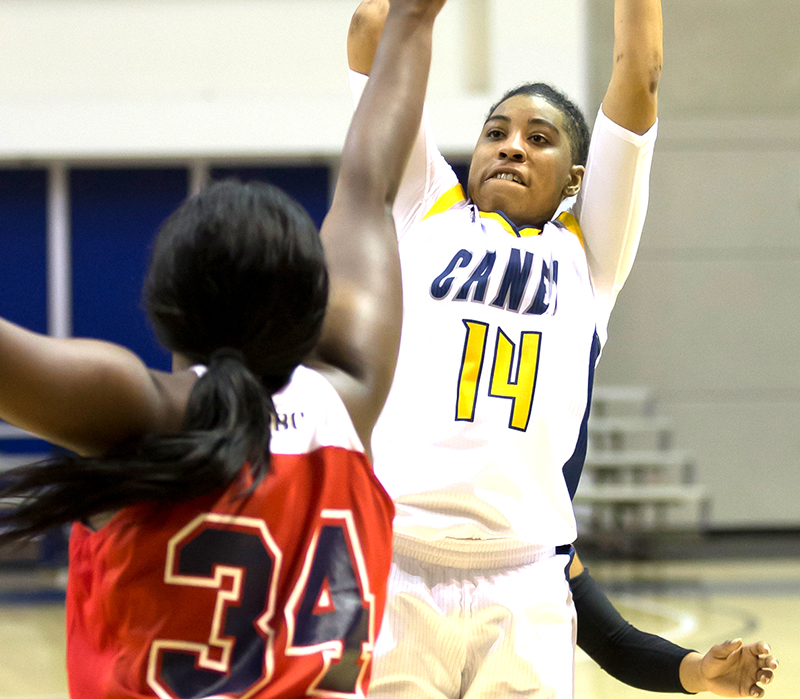 ST. AUGUSTINE, FL – Coming off a rough outing against Lander University on Monday, February 18, the Georgia Southwestern State University women’s basketball team traveled to St. Augustine, FL in hopes of getting a road victory against the Lady Saints of Flagler College. Unfortunately, it was not to be as FC center Tabitha Odabe scored 24 points to lead the Lady Saints to a 68-59 win over the Lady Hurricanes.

The Lady Saints increased their lead up to 12 with two minutes left before halftime. However, Young made back-to-back three-pointers, followed by free throws by Kris Beckham, to pull GSW to within four at 23-19. Both teams went into halftime with FC up 27-22.

However, the Lady Saints went on a 13-5 run in the third quarter to take a 40-27 lead. GSW was struggling to make shots and they were being outrebounded. The Lady Saints had a 51-38-rebounding advantage over the Lady Hurricanes.

GSW rallied in the fourth quarter, cutting FC’s lead to 49-42 with 6:26 to go in the game. However, the Lady Saints regained a double-digit lead. A three-pointer by Morgan Towells, followed by a layup from Chatman cut FC’s lead back down to single digits, but the Lady Hurricanes couldn’t get any closer.

With the loss, GSW drops to 8-17 overall and 5-14 in the Peach Belt Conference. They will travel to Augusta University on Saturday, February 23, for their final road game of the season. Tip-off is scheduled for 1:30 p.m.