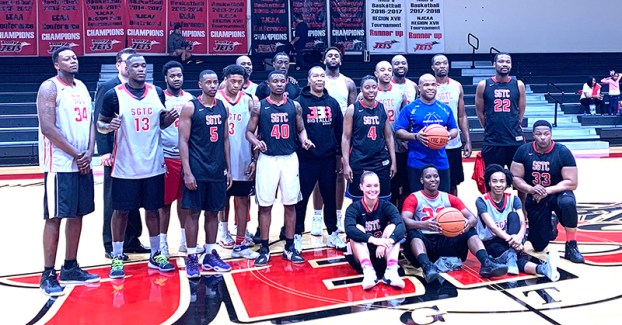 Former SGTC men’s and women’s basketball players pose for a picture after the alumni game. Photo by Ken Gustafson

It was Sophomore Alumni Day at South Georgia Technical College. It was a time for SGTC alums to rekindle friendships and bonds that continue to last.

The festivities began with an alumni basketball game in the morning, featuring both former Jets and Lady Jets players. They got to challenge themselves to see how in shape or out of shape they really are. 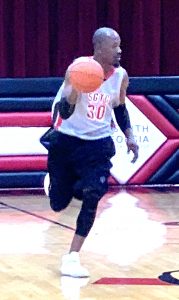 Travis Tullis (2001-02) advancing the ball down the court for the gray team.

One team wore black uniforms and the other team wore gray. Each team was made up of former SGTC men’s and women’s players. The gray team won the game 106-84, but on this day, everybody was a winner.

For former Jet Travis Tullis (Class of 2002), it was a special time to rekindle friendships with guys he hadn’t seen in a while. “It has been an awesome experience,” Tullis said. “It’s been a long time since I’ve seen some of these guys. It’s a great feeling to be back here.” Tullis currently works at Sunbelt Ford here in Americus.

After the game, alums were treated to a cookout, complete with hamburgers and hot dogs. This gave them time to fellowship and catch up on what has been going on in their lives since their days at SGTC.

Then the alums and fans were treated to a basketball doubleheader. At 1 p.m., the nationally ranked Lady Jets took on Albany Technical College and clobbered the Lady Titans 100-50. This was followed by a very competitive and hard-fought game between the SGTC Jets and the Titans of Albany Tech. Unfortunately, the Jets came up short 88-84, but that completed a wonderful day of fun and fellowship for SGTC alums and their families, as well as for current SGTC students and fans alike.