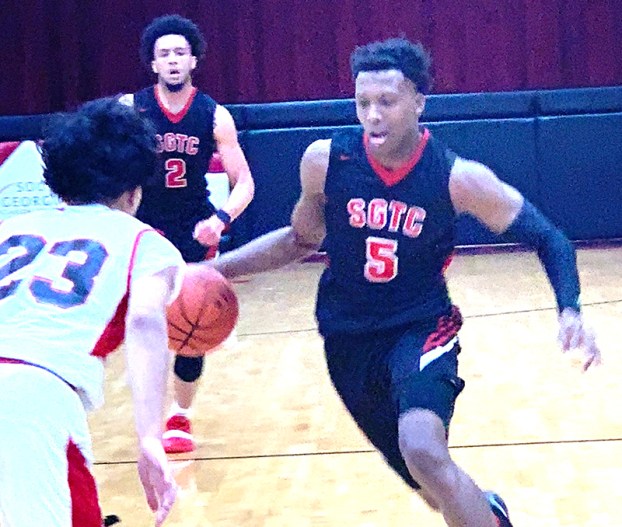 SGTC sophomore guard Justin Johnson led the Jets in scoring with 17 points in the loss to Albany Tech. Photo by Ken Gustafson

AMERICUS – The South Georgia Technical College men’s basketball team had more than one chance to take the lead late in the game. However, missed free throws and turnovers down the stretch led to their undoing as they lost to Albany Technical College (ATC) 88-84 in front of a crowd filled with SGTC alums in the Hangar on Saturday, February 23.

It was Sophomore Alumni Day at SGTC.

For the Titans, Vincius Viana led all scorers with 30 points. Viana made 11 of 12 foul shots. As a team, the Titans made 24 of 28 free throw attempts for the game (85.7 percent), while the Jets made 19 of 29 foul shots (65.5 percent). That would prove to be a huge factor in the outcome of the contest. The Titans had three other players in double-figures. Jarmarcis Nunally scored 16 points. Donovan Butler scored 15 and Jalen Brown chipped in 12. 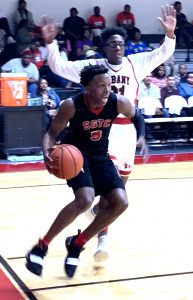 Another factor in the Jets’ loss was turnovers. SGTC turned the ball over 20 times, while ATC had 15 turnovers. The Titans scored 20 points off turnovers, while the Jets scored 17 points in that category.

The Jets finish the regular season with an overall record of 12-16 and are 8-6 in the Georgia Collegiate Athletic Association (GCAA).

The game was hotly contested early in the first half, with SGTC leading 11-8. However, ATC’s Vincius Viana nailed a three-pointer to tie the score at 11-11. 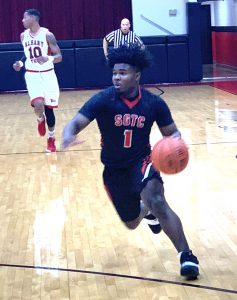 The Titans outscored the Jets 12-8 during the next several minutes to take a 23-19 lead. The Jets struggled in their half-court offense and turned the ball over on occasion. With a little over six minutes to go in the half, the Titans nailed back-to-back three-pointers to go up 29-21.

With a little over four minutes to go, DJ Fisher was able to get an offensive rebound and score to pull the Jets to within eight at 31-23. From that point, the Jets were able to outscore the Titans 6-4. However, ATC outscored the Jets 8-7 the rest of the way, including a three-pointer by Viana at the horn to give ATC a 43-32 lead at the half.

Justin Johnson goes up for a dunk.
Photo by Ken Gustafson

The Titans also shot a perfect 5 of 5 from the foul line. SGTC only got to the foul line twice in the first half and made 1 of 2 free throws.

Early in the second half, SGTC sophomore center Sam Matice drove to the basket and was fouled. Matice made both free throws to pull the jets to within nine at 43-34. Justin Johnson then scored to cut the deficit to seven. However, the Titans went on a 7-4 run to increase their lead to 50-38.

With 15:39 to go in the game, Justin Johnson got a steal and was fouled while going to the basket. Johnson hit both free throws to bring SGTC to within striking distance at 50-43. About a minute later, SGTC sophomore forward Jonathan Tchuisse scored and was fouled. Tchuisse made the free throw to bring the Jets to within six at 52-46. This was part of a 6-0 run by the Jets, which was capped off by a steal and slam dunk by Johnson to cut their deficit to three. Jeremy Johnson then scored to bring the Jets to within one. 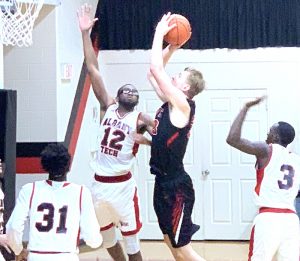 Both teams traded baskets on their next possessions, but the Titans were able to jump out to a 57-53 lead. This was part of a 9-2 run by ATC. The Titans led 61-53 with less than 11 minutes to play.

Adonis Green got the Jets back in the game with a three-pointer with 9:52 remaining.

The Titans then opened up their lead to 14 on a three-pointer by Jarmarcis Nunally with a little over seven minutes left. With 5:44 to go, the Jets were able to cut the deficit to 10 at 74-64. Then with 5:13 left, Toriano Lewis hit a three-pointer. This was followed by another three-pointer by Lewis, which got the crowd to erupt with joy. It also got ATC to call a timeout with 4:54 to go. The Jets were only down 76-70. Lewis struck again with his third three-pointer in the span of a minute to bring SGTC to within four at 77-73 with 4:31 left. Nick Cummings then drove to the basket, scored and was fouled. He missed the free throw, but the Jets were still in striking distance as they only trailed 78-75 with 4:08 to go. The 17-6 run by SGTC got the crowd back into the game as well.

After the Titans came up empty on their next possession, Cummings scored again and was fouled. This time, he made the free throw to put the Jets to within one at 78-77 with 3:37 to go. The Titans committed a turnover on their nest possession, giving the Jets a chance to take their first lead of the game since the first half.

Lewis was fouled on the Jets’ next possession, but missed both free throws that would have given SGTC the lead. 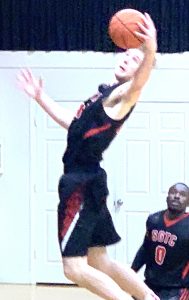 The Titans went on a short 5-3 mini run during the next minute to take an 83-80 lead. With 1:22 to go, the Titans had possession and were struggling to inbound the ball, forcing them to call a timeout. Out of the timeout, ATC was unable to score on their next possession and the jets got the rebound. They turned it over, but ATC was called for an offensive foul. Jeremy Johnson shot a three-pointer that was missed, but Cummings tipped it in to bring the jets to within one again at 83-82.

SGTC was called for a foul on the Titans’ next possession, and Jalen Brown hit two free throws to give ATC a three-point lead. The Titans scored on their next possession, but the Jets responded with a basket, cutting the lead to 87-84. However, the Jets were not able to come back and lost to ATC 88-84.

AMERICUS –It was a time of reflection, remembrance and enjoyment. It was a time to celebrate the past and the... read more