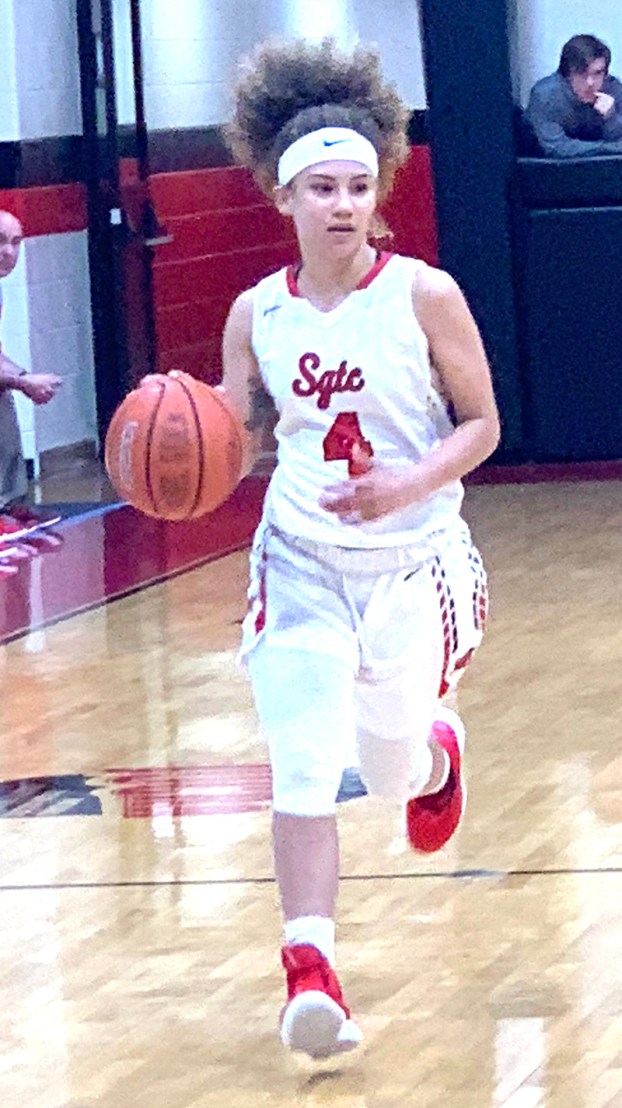 AMERICUS – The nationally ranked South Georgia Technical College women’s basketball team got off to a slow start, but erupted in the second half to thrash Albany Technical College (ATC) 100-50 on Saturday, February 23, in front of a large crowd in the Hangar on SGTC’s Sophomore Alumni Day. 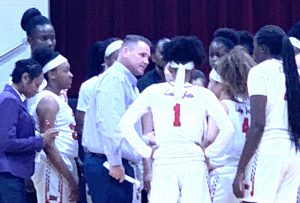 For SGTC head coach James Frey, it was a bittersweet moment in regards to his sophomores. “They go through a lot in this building from September to March and even in the off season,” Frey said. “I’m glad South Georgia Technical College recognizes them like this on Sophomore Alumni Day. They deserve it. I’m obviously glad we won the game. I’m glad that we finished undefeated in the conference. I’m glad that we are hosting the conference tournament and we are ready to compete for a spot in the NJCAA Division 1 National Tournament.”

After the SGT Lady Jets’ game, all of the sophomores on both the Jets and Lady Jets’ basketball teams were recognized in a special ceremony.

The Lady Jets got off to a slow start as ATC scored the first four points of the game.

This prompted Frey to call a timeout very early. From then on in the first quarter, it was a back-and-forth affair between both teams. 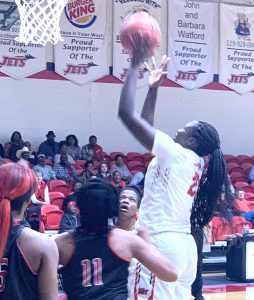 Both teams continued to trade baskets early. However, with a little over five minutes left in the first half, Nieves hit back-to-back three-pointers. This was followed by a fast-break basket by freshman small forward Yasrriyah Wazeerud-Din. The Lady Jets had all of a sudden amassed a 36-25 lead. This turn of events would end up being the turning point of the game.

The Lady Jets’ defensive pressure caused the Lady Titans to commit turnovers. The Lady Jets were able to convert those turnovers into points. With less than 20 seconds to go, Fatou Pouye hit a short jumper to put SGTC up 46-32 at halftime.

Nieves and Pouye both led the Lady Jets in first-half scoring with 10 points and Jackson had nine points in the first half. SGTC shot 45.7 percent from the field (21 for 46) and 3 for 15 in the first half (20 percent).

ATC only had five players dressed out for this game and had no substitutes. The Lady Titans were led in first-half scoring by Aniyah Peters with 10 points. ATC shot 14 for 33 from the field in the first half (42.4 percent) and shot 4 for 10 from the three-point line (40 percent). 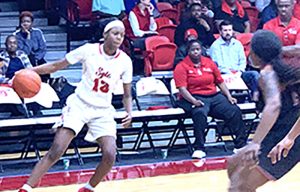 The Lady Jets continued to cause turnovers and score fast-break baskets.

The Large lead allowed Frey to put in his reserves so they could get some valuable playing time. Freshman guard Anna McKendree was able to score a fast-break basket for the Lady Jets. Then with about five seconds left in the first quarter, Kamya Hollingshed nailed a three-pointer for SGTC.

With 8:54 to go in the game, Hollingshed hit back-to-back three-pointers, followed by a three-pointer by freshman point guard Rio Yamazaki. At the 8:00 mark, SGTC led 83-41.

With less than six minutes to go, Hollingshed hit her fourth three-pointer of the game to give SGTC an 89-43 lead. 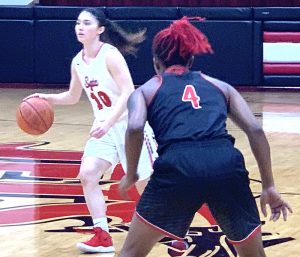 Then with 29 seconds to go in the game, McKendree scored to put the Lady Jets at the century mark. They wound up up winning 100-50.

For ATC, they had two players in double-figures. Kereen

The Lady Jets have now gone through the Georgia Collegiate Athletic Association (GCAA) regular season with an unblemished record. They are now 27-3 overall and 18-0 in the GCAA. They are currently ranked 20th in the nation in the NJCAA Division 1 top 25 rankings.

They will host the conference tournament semifinal round, which begins Friday, March 1. Time and opponent are still to be determined. Should they win the tournament, they will play in the District J play-in game for the right to go to the National Junior College Athletic Association (NJCAA) Division 1 National Tournament in Lubbock, TX March 18-23.