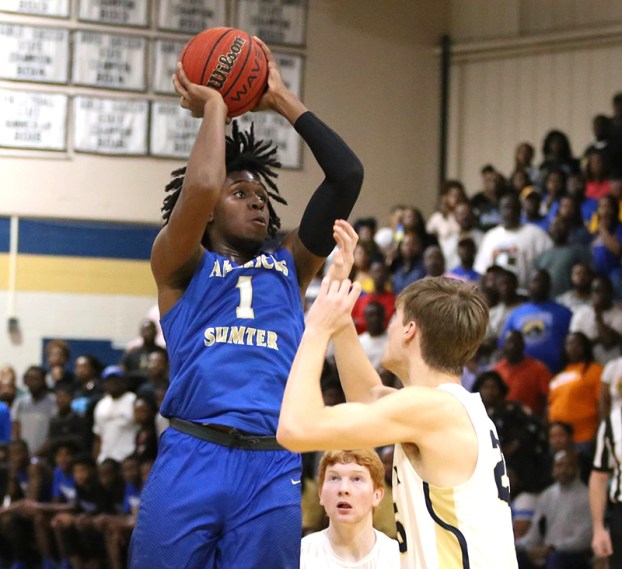 Americus-Sumter senior forward Joshua Lusane has been named the Americus Times-Recorder Boys’ Basketball Player of the Year for the 2018-19 season. ATR Archive

As a result, ASHS (26-4) has clinched a berth in the final four and will face Sandy Creek (27-3) on Saturday, March 2, at Fort Valley State University. The Patriots defeated Thompson 69-43 in one of the other quarterfinal games also played on Wednesday, February 27.

The Panthers were not without support as school officials chartered a fan bus so that numerous ASHS students could make the trip to Atlanta to support the Panthers. By game time, all of the tickets had been sold out. It was a jam-packed, standing-room-only crowd in the Mark Kelly Gymnasium on the SPX campus. 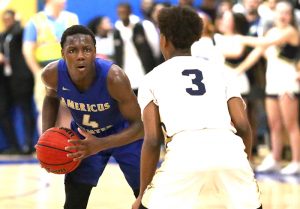 Fortunately for the ASHS students and fans who made the trip, they were treated to a dominating performance by the Panthers, particularly on the defensive end.

“It was fantastic. I can’t be more proud of our guys,” ASHS head coach Michael Hoffpauir said. “We were able to turn up our transition, build a lead and maintain it. None of the pundits from Atlanta thought that we would beat St. Pius. They didn’t think we had a chance, but we proved them wrong. Now we have a chance to do it again against Sandy Creek.”

Both teams struggled to score in the first few minutes of the game. The Panthers were playing excellent defense, while the Golden Lions were being patient on offense.

With 4:48 to go in the first quarter, the 0-0 deadlock was broken when Brown hit one of two free throws to give ASHS a 1-0 lead.

SPX still had trouble scoring due to the defense played by the Panthers. Lusane scored the first two-point basket of the game to give ASHS a 3-0 lead with a little over three minutes left in the quarter. Then Moore scored and was fouled. Moore made the free throw and the Panthers had a 6-0 lead with 2:38 left in the first quarter. 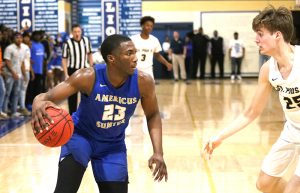 The Panthers went on a 4-0 lead until Zach Ranson scored to put the Golden Lions on the board with 43.7 seconds left. Then with 11 seconds left, Niko Broadway scored to bring SPX to within seven. The Panthers led 10-3 by the end of the first quarter.

With 1:40 left, ASHS led 24-11 when Lusane was fouled by Broadway. Lusane missed the first free throw but made the second to increase the ASHS lead to 25-11. Cormier then scored for the Golden Lions, but Lusane responded with a jumper to put ASHS up 27-13 with a little over a minute left in the first half.

Brown then hit a jumper to give the Panthers a 29-13 lead with 25 seconds left. Then a few seconds before the half ended, senior small forward Sam Crumbley scored to give ASHS a 31-13 halftime lead.

The Panthers played outstanding defense during the first half. The Golden Lions of SPX didn’t score their first point of the game until about the 4:00 mark of the first quarter.

The Golden Lions scored the first points of the second half on a basket by Patrick Snipes. SPX went to full-court pressure to try to disrupt the Panthers. This prompted Hoffpauir to call a timeout early in the third quarter to get his club to regroup. Out of the timeout, Brown hit a jumper to give ASHS a 33-15 lead. Both teams traded baskets on their next possessions. Then Lusane struck again with another jumper to give the Panthers a 37-17 lead.

However, the Golden Lions went on a 10-4 run, capped off by a three-pointer by Cormier. SPX got the ball inside to Phillip Okafor, who was fouled. Okafor made one of two free throws to cut the Panthers’ lead to 41-28, but Crumbley responded with a basket to increase the ASHS lead back up to 15.

With a little over a minute left in the third quarter, Brown stole the ball and scored off a goal tending call against SPX. At that point, the Panthers led 45-28.

To begin the fourth quarter, SPX guard Matt Gonzalo had his shot blocked by Lusane. At that point, The Golden Lions went on a 6-5 run before Lusane scored to give ASHS a 52-34 lead. Brown then scored to put the Panthers back up by 20.

The Golden Lions continued to try to press the Panthers full court, but ASHS was able to break it. SPX shot numerous three-pointers in this game, but were only able to hit just a few. Most of them were hit by Cormier. He knocked down three shots from beyond the arc.

The Panther defense continued to stifle the SPX offense in the second half.

With a little over four minutes left in the game, Brown hit another three-pointer to put ASHS up 57-36. Lusane added to the lead when he was fouled while shooting and hit both free throws. Riley Costas hit a three-pointer for SPX with less than four minutes to go. At that point, SPX head coach Aaron Parr called a timeout.

The Golden Lions had two players in double-figures. Niko Broadway led SPX in scoring with 13 points and Chase Cormier had 11. Nine of Cormier’s points came on three-pointers. SPX finishes their season at 26-4.