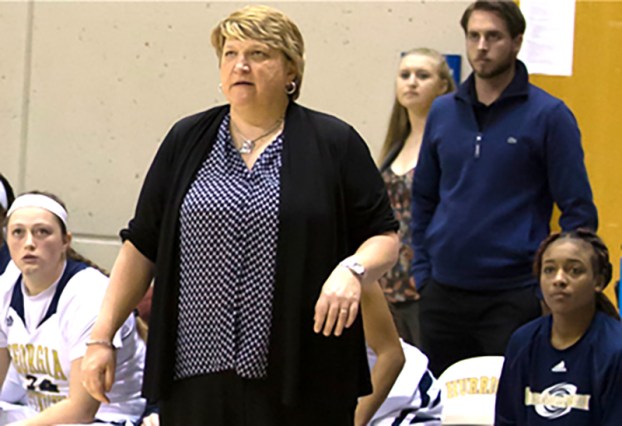 After 12 years as head coach of the Lady Hurricanes, GSW women’s basketball coach Kelly Britsky has decided to step down. Photo by GSW

AMERICUS – After 12 years at the helm of Georgia Southwestern State University women’s basketball, head coach Kelly Britsky has decided to step down from her coaching position. Britsky is just the second head coach in the program’s history as an NCAA Division II member and helped with the transition of the program from the NAIA level to the NCAA Division II level and the Peach Belt Conference.

“After dedicating over a decade of my life to GSW athletics, it is time to see what’s next,” Britsky said. “I have always been proud of my teams, both on and off the court. The young women that have played in the Storm Dome have made friendships and memories for a lifetime and have gone on to be successful, each in their own way. With the boost from President Neal Weaver, GSW athletics is on the rise and the best is yet to come.”

Prior to her arrival at GSW, Britsky coached from 1999-2007 at LaGrange College (LC) in LaGrange, GA. She was the Lady Panthers’ first head coach and helped lead LC to a United States Athletic Association (USAA) National Tournament appearance in the program’s third year of existence. The Britsky era at LC included two All-Americans, twelve All-Conference players and five All-Freshman Team members.

“I want to sincerely thank all of the people who have supported my journey,” Britsky said. “GSW has a tremendous community of caring people that work very hard every day to support the college and the community. Thank you to all my assistant coaches, my colleagues here at GSW and in the Peach Belt Conference and my women’s basketball mentors that give so much of themselves to my players.”

“Most of all, I want to thank my family and friends for your support throughout the ups and downs that coaching brings,” Britsky said. “Thank you for understanding the long nights, early mornings and lack of weekends. I will take a little extra time now with my family and friends until I see what door opens next and what new adventure is out there for me. Take tomorrow by Storm!”

“We appreciate all of Kelly’s hard work and dedication to our women’s program here at GSW,” GSW director of athletics Mike Leeder said. “We wish her and her family the best as she transitions away from coaching.”

Hurricanes send six seniors out on a winning note

From Staff Reports   AMERICUS – For five GSW seniors, it would be a night they would cherish for the... read more