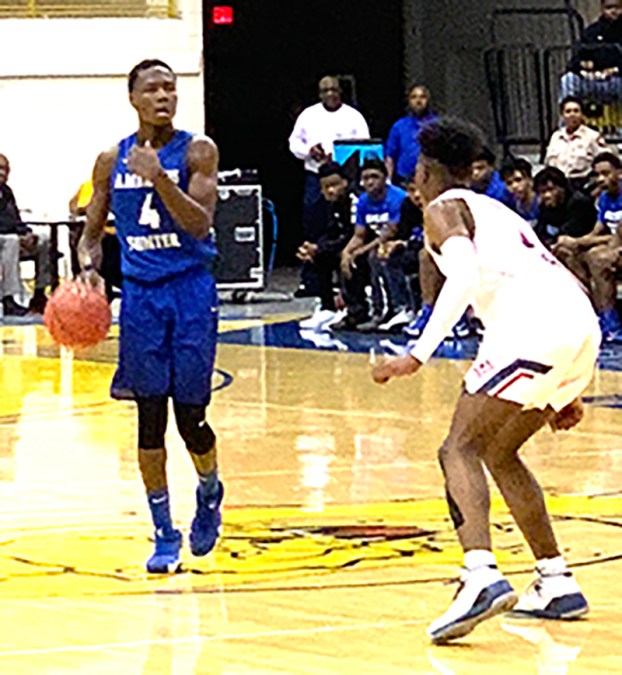 Americus-Sumter junior guard Trae Brown scored 20 points to lead the Panthers to a 63-56 win over Sandy Creek in the state semifinals. Photo by Ken Gustafson

FORT VALLEY, GA – The Americus-Sumter boys’ basketball team (26-4) used their defensive pressure to create turnovers down the stretch and made free throws when it counted the most to secure a 63-56 win over Sandy Creek (SC) in the Georgia High School Association (GHSA) Class AAAA State Semifinals on Saturday, March 2, at Fort Valley State University.

With the win, the Panthers have booked their ticket to the state championship game, which will be played on Friday, March 8, at the Macon Centerplex in Macon, GA.

They are one win away from claiming Sumter County’s first state championship in boys’ high school basketball in 52 years. According to the website www.ghsbp.com, Union High School in Leslie, led by head coach Ben Strickland, won the Class C Boys’ State Championship in 1967. Union defeated Greenville 58-48 to win the title and finished that season at 28-6. The last time ASHS won a state championship in boys’ basketball was in 1961. Back then, the Americus High School boys’ team, led by head coach Jimmy Hightower, won the Class A Boys’ State Championship. That team finished the season at 25-3 and defeated Winder-Barrow 52-47 to win the state title. Needless to say, this is an historic moment for Americus and Sumter County. The Panthers are on the verge of completing an historic achievement. 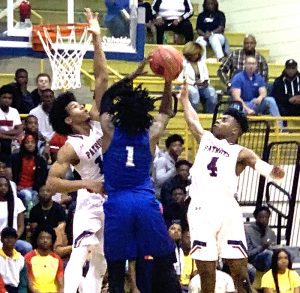 ASHS head coach Michael Hoffpauir credits his team’s ability to advance this far partly due to the competitive toughness of the region that they’re in: Region 1-AAAA. ASHS will have to beat another Region 1-AAAA opponent to win the state championship. The Tigers of Carver (Columbus) (24-5) defeated Woodward Academy in the other state semifinal 58-50.

This will be the fifth time this season that ASHS and Carver (Columbus) will meet. The Tigers won the Region 1-AAAA Tournament Championship by beating the Panthers 55-54 on Friday, February 8, in Columbus. They have won three of the previous four games between both teams. However, this fifth meeting will be for the Class AAAA State Championship.

“It’s a very tough region. All it did was prepare us for the playoffs. Iron sharpens iron and that’s what it did for us,” Hoffpauir said.

It’s a tough region indeed. Two teams from the same region will meet to compete for the ultimate prize. 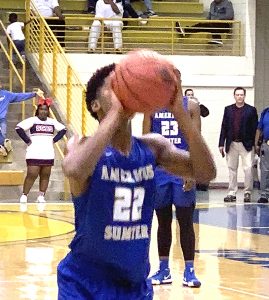 Though the Panthers had a double-digit lead, the Patriots made a run to get to within three late in the game. According to Hoffpauir, that run by SC didn’t shake his team’s resolve or confidence. “The great thing about it is that we’ve been in these games before,” Hoffpauir said. “We knew that even though we were up by 12 at halftime, or whatever it was, they were going to make a run. In basketball, there are ebbs and flows. Teams are going to make runs. You’ve got to withstand that run. We were prepared to do that and we did.”

ASHS junior guard Trae Brown led the Panthers in scoring with 20 points. Nine of his points came off of three-pointers. However, the biggest points that Brown scored came from the free-throw line in the fourth quarter. Brown sank 5 of 6 foul shots in the final quarter to help the Panthers secure the win. Senior Forward Joshua Lusane also scored in double-figures. He had 17 points in the Panthers’ win.

“It was amazing. I just love my teammates and our coaches for pushing us and getting us to where we are at. We’re in the state championship game,” Lusane said.

The Panthers jumped out to an 8-0 lead to start the game thanks to two three-pointers by Brown and two free throws by Lusane. The Patriots cut the Panthers’ lead to 8-4 by forcing two turnovers and getting four-straight points.

However, The Panthers increased their lead on the strength of two more three pointers by Lusane and junior shooting guard Leshanna Ross. Ross’s three-pointer came at the buzzer to end the first quarter. By the end of the quarter, ASHS had a 19-11 lead. 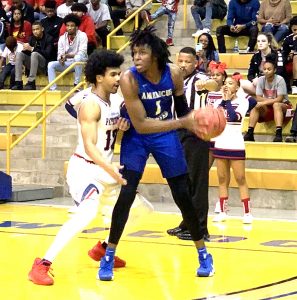 ASHS went on a 4-0 run to start the second quarter, capped off by a basket from Brown. The Panthers’ defense caused the Patriots to struggle on offense. It also forced SC into committing turnovers. ASHS was able to capitalize on those turnovers and built a 28-14 lead by the 4:09 mark of the second quarter. This forced SC head coach Jon-Michael Nickerson to call a timeout.

The Patriots responded with a 5-0 run out of the timeout, but Lusane responded with a jumper to put the Panthers’ up by 11 at 30-19. SC forward TJ Bickerstaff was fouled and hit the first free throw. He missed the second but got an offensive rebound and put-back to cut the Panthers’ lead to 30-22. Lusane scored to put ASHS back up by double-digits with less than two minutes to go in the first half. Ross nailed another three-pointer, which electrified the ASHS fans who made the trip to Fort Valley.

However, there was a reason the Patriots made it this far as. They showed it when Julian Alexander knocked down a three-pointer in the waning seconds of the half. In spite of the late first-half run by SC, the Panthers went into the locker room at halftime with a 39-27 lead. They seemed to be in total control of the contest. The Panthers were 16 minutes away from reaching the Class AAAA State Championship Game in Macon.

Brown had 10 first-half points to lead the Panthers. Both Lusane and Ross poured in nine points in the first half. For the Patriots, they were led in first-half scoring by Bickerstaff’ with nine points.

SC went on a 7-2 run to start the second half, capped off by a three-pointer by Keith Williams III. This prompted Hoffpuair to call a timeout. Out of the timeout, a huge turning point in the game took place. The Panthers had the ball, but Alexander got a steal and was on his way to the basket for a dunk. However, he missed the dunk. The Patriots got subsequent offensive rebounds, but weren’t able to score. The Panthers got the rebound and a dunk at the other end by Lusane. It was a four-point swing.

ASHS then built a 47-36 lead on another basket by Lusane with a little under 3:40 to go in the third quarter. Timeout was called with 3:36 left in the third with the Panthers up by 11.

Brown hit another three-pointer to increase the Panthers’ lead to 50-38. The Patriots tried to get back into the game as Alexander drove to the basket and scored. This was followed by a three-pointer by Bickerstaff, cutting the ASHS lead to 50-45 with less than a minute to go in the third quarter.

However, Lusane sent a message with a basket to give ASHS a 52-45 lead by the quarter’s end. ASHS was now eight minutes away from a date against Carver (Columbus), their Region 1-AAAA opponents, or Woodward Academy out of Atlanta. 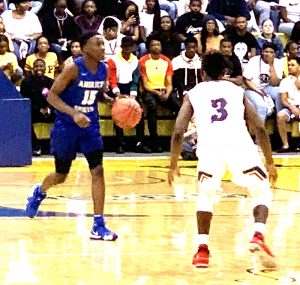 The Panthers began the fourth quarter by trying to move the ball around the perimeter and run time off the clock. They were being very patient on offense. ASHS senior forward Joshua Moore had a chance to give the Panthers their first points of the quarter at the free-throw line, but missed both free throws. On the Panthers’ next possession, the Patriots came out with a half-court trap to disrupt the ASHS offense and force a turnover. They did just that with a little over four minutes left. Bickerstaff got a steal and scored to cut the ASHS lead to 52-49. This capped off a 4-0 run by the Patriots and prompted a timeout by Hoffpauir with 4:06 left in the game.

“We weren’t getting anything done with the ball,” Hoffpauir said. “We knew we had to bleed a little clock. A lot of teams don’t like to do that so early. I knew that they couldn’t match up and guard us one on one, so I wanted to run some clock and do some things differently. I wanted to take them out of the flow of their game because they were making a run. I wanted to slow them down so that we could control the game. That was my intention of doing that.”

The Panthers continued to be patient on offense, but struggled to score. However, they were able to force a turnover and Brown was fouled while shooting. Brown made both free throws to give the Panthers a 54-49 lead.

From that point on, ASHS was able to force the Patriots to commit crucial turnovers down the stretch, including one that led to a basket by junior small forward Wallace Bradley. At that point, all the Patriots could do was try to get a steal or stop the clock by fouling. The Panthers took advantage of their trips to the foul line by making their free throws down the stretch to secure the victory.

Coach Hoffpuair praised the dedication and spirit of the Americus-Sumter fan base and how they made it very loud in the arena. “That’s one thing I love about our community and our fan base. They will come out and support us and they did that throughout the playoffs,” Hoffpauir said. “They packed the house in our first playoff game. When we traveled to Upson-Lee and St. Pius, they did the same thing. It was great to see them come out. I have no doubt that we will pack out the Macon Centerplex on Friday.”

For SC, they finish their season with a record of 27-4. They were led in scoring by TJ Bickerstaff with 21 points. Julian Alexander was also in double-figures, scoring 13 points. The Patriots made 7 of 15 free-throw attempts. That also factored in the game’s outcome.

The Panthers will try to cap off a magical 2018-19 season when they compete for the state championship on Friday, March 8, at the Macon Centerplex. Tip-off is scheduled for 1 p.m.