AMERICUS – Well over 100 people ranging from Americus Mayor Barry Blount to the city council members to members of the GSW women’s soccer team were in the baseball/softball parking lot on the campus of Georgia Southwestern State University on Saturday, March 2, to witness the groundbreaking of a new indoor baseball and softball hitting facility expected to be completed in the fall of 2019.

GSW President Neal Weaver, Ph.D., made his opening remarks. “Welcome to what we hope is a very exciting event and start to a very exciting project here at Georgia Southwestern. This is something that has been talked about at the university for a long time and something that we are very excited to finally get started,” Weaver said. Weaver went on to thank those involved in the Canes 360 program and the GSW Foundation for their support in making this project possible. “Without Canes 360 and the commitment that is being made through individuals, this project would not be possible,” Weaver said. “It is a great example of how all of us coming together and each of us doing our part can really do big and exciting things for the university.”

Americus Mayor Barry Blount said that he couldn’t think of a better event to have than the groundbreaking of a new building that’s not only going to benefit the university, but the community as well. “Georgia Southwestern is a very important part of not only Americus and Sumter County, but the entire Southwest Georgia area,” Blount said. “Athletics is a very important part of any college and university. I think this is a step forward in making and providing a facility for our student-athletes to become better student-athletes. It will also provide us the opportunity to attract the student-athletes that we want to come to this university and be apart of us. I look forward to coming back and cutting the ribbon when it is completed.”

GSW Athletic Director Mike Leeder came up to make his remarks: “It’s a great day to be a Hurricane. When we talk about as a university ‘Taking tomorrow by Storm’, a facility like this will allow us in athletics to do our part by taking recruiting by storm,” Leeder said. “When you look at the coaches that we’ve put in place, I couldn’t have any more confidence in our new head baseball coach Josh McDonald and our second-year head softball coach Nicki Levering. They will not only use the softball and baseball-hitting complex for the betterment of the students that we have today, but for the ones that we’re going to recruit for tomorrow. Watching them work now and watching them taking recruiting by storm gives me great confidence that in a very short time, we will match the competitive success on the field with the success that we’ve had off the field, in the classroom and in the community.” Leeder went on to say that he is extremely excited to see this project commence and that he believes it will be great next fall when the student-athletes have a place and dedicated space that they can call their own for baseball and softball. He also mentioned that this was the dream of John and Sharon Sanders. They are the parents of Grayson Sanders, a former Lady Hurricane softball player and graduate of GSW. “They came to me in March of 2016 with an idea to build a training complex for baseball and softball,” Leeder said. “Here it is, coming up on three years later, that we are about to break ground. I look forward to all of the fruit that it will bear for baseball and softball in terms for competitive success.”

Doug Moses, Board Chairman of the GSW Foundation, said that on behalf of the GSW Foundation Board of Trustees, he is very excited and honored to support the university with funding to support the construction of the indoor hitting facility. “The foundation is also supporting the university with many other initiatives, such as providing funds for the Southwestern Promise Scholarship Program, where students from a 56-county area in Southwest Georgia will automatically be eligible for a $1,000 or $2,000 scholarship,” Moses said. He went on to say that the foundation is providing funds for enhanced programs, and in certain cases, providing funds for new programs established at the GSW campus. 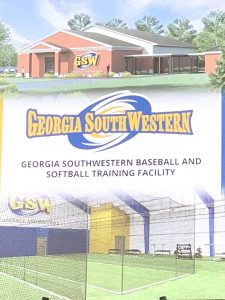 This is a picture of the GSW baseball and softball hitting facility, both on the outside and inside. It is expected to be completed in the fall of 2019.
Photo by Ken Gustafson

President Weaver told the coaches and student-athletes who were at the groundbreaking ceremony that he hopes they understand that this is an investment for them. “This is an investment in your experience at the university,” Weaver said. “This is the university saying that we believe in you and that we believe your are worth our investment. We believe you are and should be competitive throughout our conference in every sport we play and in every game we participate. We want you to believe that you are as good as anybody in our conference and in our country.”

Once Weaver was finished, they began the groundbreaking by pouring blue sand on the ground. Ten people, including the GSW mascot Surge, put on yellow hard hats and stuck their shovels into the blue sand as a symbolic digging.

According to university officials, the hitting facility will be located between the baseball and softball fields facing Anthony Drive. The new building will also serve as a safe space for inclement weather while games are in play for soccer, tennis, baseball and softball.