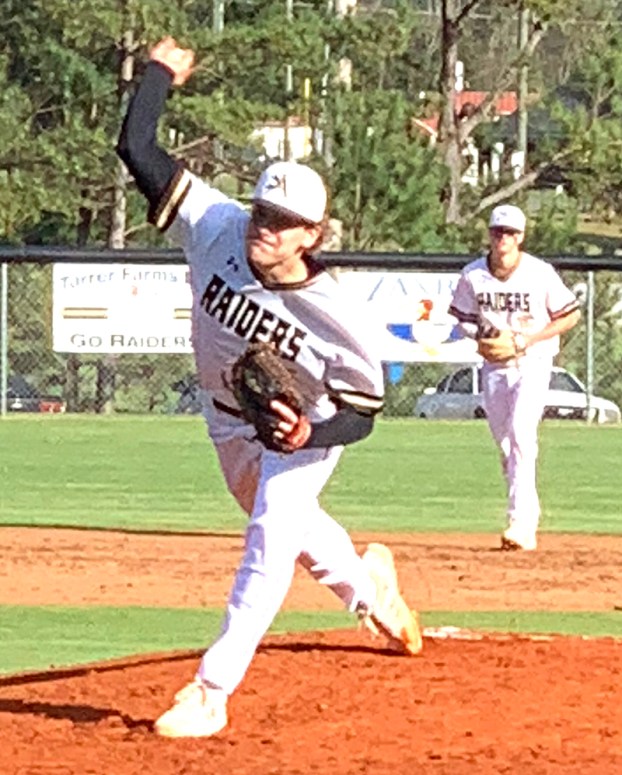 AMERICUS – The Southland Academy Raider baseball team once again had a lead over the Cougars of Crisp County (CC). However, as they did in the previous meeting between the two teams, the Cougars came from behind late to defeat the Raiders by one run. This time, they defeated Southland 7-6 on Monday, March 4, at Southland Academy (SA).

“We didn’t make enough plays. We had opportunities to make plays to end innings. We didn’t do it. We extended innings and gave them opportunities to score runs and we ended up losing another tough game,” SA head coach John Brady said. “We’ve lost three times by a total of four runs. We’re just not making enough plays defensively. Some of it has to do with the fact that it’s early in the season, but some of it is just silliness. We’re not thinking through some things that we need to be thinking through.”

The Raiders had a 6-4 lead going into the top of the fifth inning. SA pitcher Adam Smith was brought in to relieve starter Hunter McCain. CC first baseman Jack Carter led off the inning with a single. Dallas Pheil then reached on an error. After a sacrifice bunt by Cole Lancaster, Jordan Grinnell reached first base on a wild pitch. Grinnell swung at the pitch for strike three, but was able to reach first without getting out due to the wild pitch. Courtesy runner Alex Kelly scored to cut the Raiders’ lead to 6-5. This moved Pheil over to third base. The Cougars had the tying run at third with one out.

Noah Walters then hit a sacrifice fly to center, scoring Pheil to tie the game at 6-6. The Raiders were able to get out of the inning when CC leadoff hitter Toby Stripling grounded out to first baseman Luke Law to end the threat. 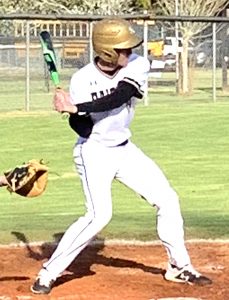 Southland Academy left fielder Landon Law batting against Crisp County. Law went 1 for 4 at the plate, scored a run and drove in another run against the Cougars.
Photo by Ken Gustafson

At this point in the game, Walters had been brought in to pitch in relief of Jordan Grinnell. In the first meeting between these two clubs back on Friday, February 22 in Cordele, Walters struck out seven Raider hitters to help the Cougars earn a come-from-behind 3-2 victory over the Raiders. In this game, Walters was no different and was almost unhittable. He struck out eight SA batters to help the Cougars nail down another come-from-behind victory over the Raiders.

In the top of the seventh inning with the game tied 6-6, Pheil led off with a double for the Cougars. Lancaster then drew a walk and Grinnell executed a sacrifice bunt, moving runners to second and third. Then, perhaps the most crucial play of the game took place. Walters hit an infield fly over towards first base, but there was miscommunication between SA first baseman Luke Law and second baseman Freddie Updike. The ball ended up dropping in fair territory. Instead of two on with two out, the bases were loaded with one out.

Toby Stripling popped up for the second out, but Smith walked Jackson Napier, scoring Pheil from third. His run would end up being the winning run for the Cougars.

The Raiders tried to battle back in the bottom of the seventh inning, but the velocity on Walters’ fastball made it tough for the Raider hitters. Walters struck out Luke Law for the first out. Hunter McCain was able to draw a walk, but Walters struck out both Owen Exley and Landon Law to end the game.

Early in the contest, the Cougars scored three runs in the first and one in the third to take a 4-0 lead. However, the Raiders rebounded like champions. They scored six runs on three hits in the bottom of the third inning to take a 6-4 lead. In that inning, the Raiders took advantage of three CC errors. Unfortunately, they weren’t able to hold the Cougars back and lost 7-6. 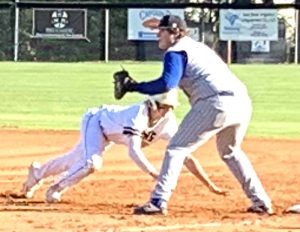 Southland shortstop Owen Exley dives back to first base on a pickoff attempt by the Crisp County pitcher.
Photo by Ken Gustafson

For the Cougars, Jack Carter led the way offensively by going 3 for 4 with two RBIs. CC starting pitcher Bailey Barfield went 2 for 4 and scored two runs.

Barfield pitched 2.2 innings for the Cougars. He gave up six runs on three hits. He walked three and struck out one. Jordan Grinnell pitched very briefly in relief of Barfield. He pitched a little over an inning, giving up no runs, hits, walks or strikeouts. Walters came on in relief of Grinnell in the bottom of the fifth. He struck out eight Raider hitters and walked one, while giving up no runs or hits.

With the loss, SA falls to 1-3 on the season, but Brady is not overly concerned right now. “We’re going to get there. We have a good defensive team. That’s something that I’m not really worried about at the moment. I think that we’re going to be fine in that area,” Brady said. “The more we play, the better we’re going to get. We’re still working out some rotations and things like that. We just haven’t made enough plays thus far. That’s what it boils down to,” Brady went on to say that he was very pleased with how his team hit the ball against the Cougars in their second meeting against them. “I’m really tickled with how we hit the baseball today. I thought we hit the ball well,” Brady said. “Their kid (Walters) coming in like the last game, we couldn’t do much with him. Prior to that, I felt like we had some really good at bats and we hit the baseball pretty good. We jut had some chances and didn’t take advantage of them.”

The Raiders will try to get back into the win column when they travel to Pinehurst, GA to take on Fullington Academy on Wednesday, March 6. First pitch is scheduled for 4 p.m.