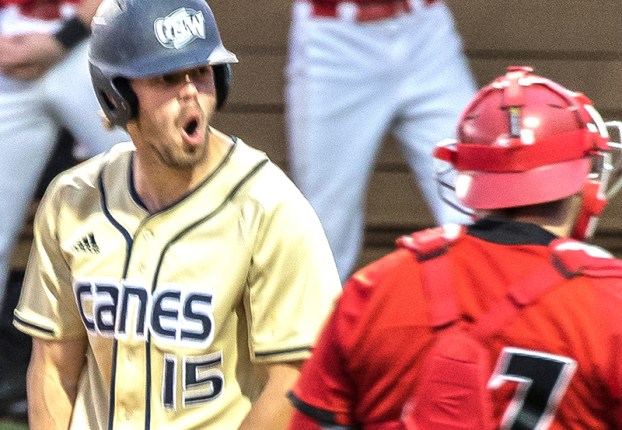 COCHRAN, GA – Up until their extra inning 4-2 loss to North Georgia on Saturday, March 2, the Georgia Southwestern State University baseball team had won four out of their last five games. Since then, unfortunately, they have gone 1-3 in their last four games, including a 16-1 thrashing by Middle Georgia State. That loss took place on Tuesday, March 5, in Cochran, GA.

MGS scored one run in the second and three runs in the third inning to take a 4-0 lead. Then the back breaker took place in the bottom of the fourth inning. MGS scored seven runs in that inning to effectively put the game out of reach. They would go on to defeat the Hurricanes 16-1.

GSW scored their only run in the top of the sixth inning. Infielder Jonathan Martin scored that lone run. He went 1 for 1 in his only at bat of the game

MGS scored 16 runs on 15 hits and committed one error.

For GSW, it was five errors that were largely responsible for the loss. The Hurricanes struggled against MGS pitching, scoring one run on four hits.

In addition to Martin’s one hit, Hunter Foster, Matthew Mamatas and Colby Hall earned the other three hits for the Hurricanes.

It was a rough outing for GSW starting pitcher Jakob Brown. Brown pitched just three innings and allowed four runs on seven hits. Three of those runs were earned. He walked none and struck out two batters, but gave up a home run.

Peyton Sells came on in relief of Brown, but struggled as well. Sells gave up five runs on two hits. All five runs were earned. He walked two batters and struck out none.

Kyle Anderson was the starter for MGS. Anderson pitched four innings and gave up no runs on two hits. He walked two GSW hitters and struck out four.

The Hurricanes (8-11, 3-6 PBC) will try to get back to their winning ways when they host Peach Belt Conference opponent Flagler College for a three-game series this weekend. This weekend is Alumni Weekend at GSW. The start time for the game on Friday, March 8, will be at 6 p.m.

Saturday’s doubleheader against the Saints will begin at noon, followed by Game 2 to be played at 3 p.m.