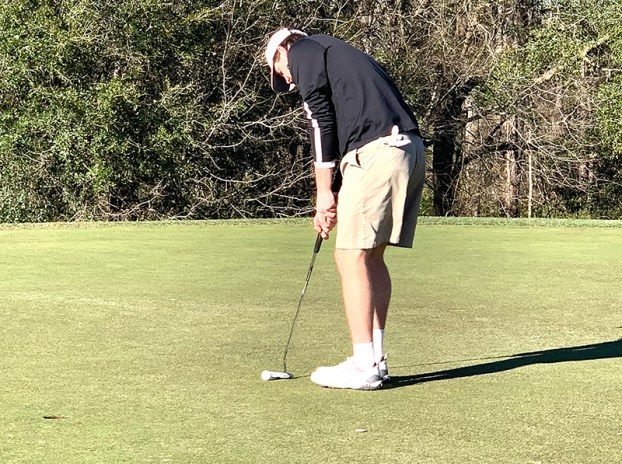 Southland Academy golfer Chandler Studdard lining up to make a put on the eighth hole. Studdard shot a 39, the lowest individual score of the tournament. Photo by Ken Gustafson

AMERICUS – On a cold, brisk and windy Tuesday afternoon, the Southland Academy boys’ golf team was able to shoot low enough scores to beat Crisp County (CC) 166 to 206 in a nine-hole tournament on Tuesday, March 5, at the Griffin Bell Golf Course.

SA’s Chandler Studdard shot a 39, the lowest individual score of the tournament. John Roberts Payne shot the next lowest score of 41. Both Travis Hughes and Bradley Kitchens each shot a 43 for a total team score of 166. 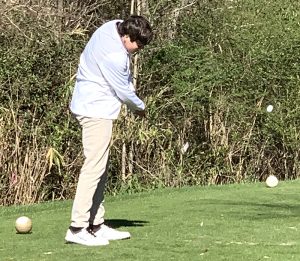 For CC, Kendall Wilson shot the Cougars’ lowest individual score of 44. Zack Musslewhite was next, as he shot a 49. Garrett Black posted a round of 53 and John Cook shot a 60 for a total team score of 206.

The Raiders will play their next match on Tuesday, March 12, against Deerfield-Windsor at the Doublegate Country Club in Albany. The match is expected to begin at 2 p.m. 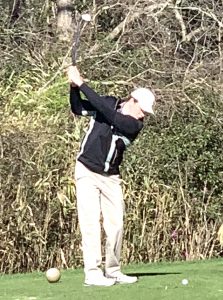 Southland’s Travis Hughes getting ready to hit his T shot. Hughes shot a 43 in the tournament against Crisp County.
Photo by Ken Gustafson

The Raiders’ next home match at Griffin Bell Golf Course will be on Thursday, March 14, against both Deerfield-Windsor and Tiftarea Academy. Start time for that match is scheduled for 2 p.m. 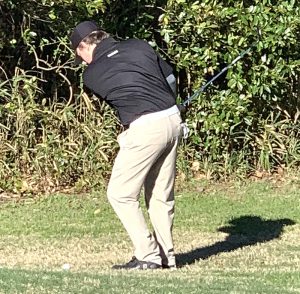 Southland’s John Roberts Payne chipping the ball up on to the green. Payne shot a 41 in the Raiders’ win.
Photo by Ken Gustafson

The Raiders will then go back on the road to Thomasville, GA to take on the Warriors of the Brookwood School on Tuesday, March 19, at the Glen Arven Country Club. The match is expected to begin at 2 p.m.

ELLAVILLE – The Schley County Wildcat baseball team stayed undefeated at 8-0 when they thrashed the Eagles of Crawford County... read more