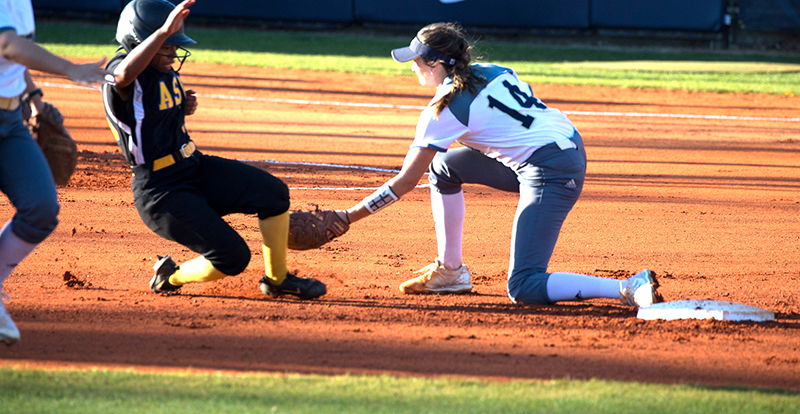 VALDOSTA, GA – The Georgia Southwestern State University softball team went down to Valdosta with hopes of sweeping a two-game series with the Blazers. Unfortunately for the Hurricanes, the outcome went in the opposite direction as VSU, ranked 5th in the nation, swept GSW 9-1 and 10-0 at Steel’s Diamond on Wednesday, March 7.

Both games ended in five innings as the Hurricanes used a total of four pitchers throughout both games.

In Game 1, GSW had the bases loaded, and Kayla Kerr drew a walk, scoring Chloe Zoeller to give the Hurricanes their only run of the game. Both Zoeller and Hayley Tierce each had two hits in the game and Aimee Oglesby had one hit.

Shannon Gibson started in the circle for the Hurricanes. She pitched a little over four innings, allowing five runs on eight hits. On a positive note, Gibson had two strikeouts in her outing.

Kerr came on in relief of Gibson, but also struggled. She gave up four runs on three hits and walked a batter in just 0.1 innings pitched. The Hurricanes went on to drop Game 1 by the score of 9-1.

Game 2 did not go much better for GSW. VSU’s Kelly Robb hit a three-run home run in the bottom of the fifth inning. This was part of a five-run inning for the Blazers that ended the game on run differential rules. GSW pitcher Hayley Dickerson gave up five runs, but struck out four VSU batters in four innings pitched. Kayla Rowell led the Hurricanes with four putouts.

The Blazers’ bats were red-hot as GSW gave up three home runs. The final home run brought home three VSU runs in the bottom of the fifth to give the Blazers the 10-0 shutout.

GSW (9-9) will step back into Peach Belt Conference play when Georgia College comes to Americus on Saturday, March 9, for Bark in the Park Day. The first game of the double header is scheduled to begin at 2 p.m. All animals are welcomed.