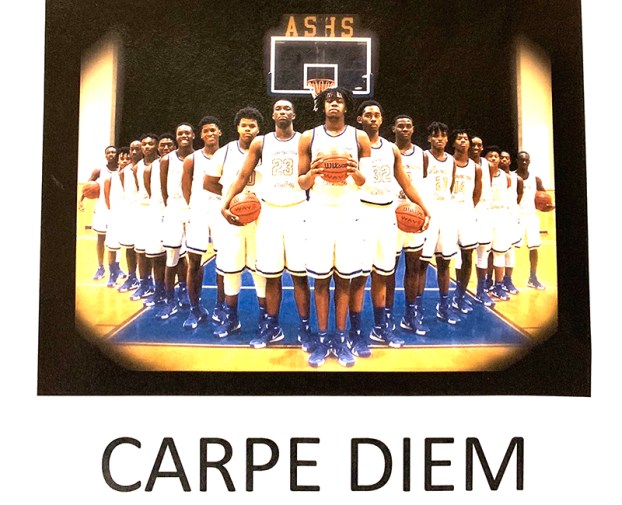 Carpe Diem: Latin for "seize the Day", was the theme of Thursday night's banquet for the ASHS boys basketball team on the eve of the state championship. Photo by Ken Gustafson

AMERICUS – On the eve of the Boys’ Class AAAA State Championship Game between Americus-Sumter and Carver (Columbus), the Panthers were treated to a dinner at the education building of Phoebe Sumter Medical Center on Thursday evening, March 7.

It was a time for the players and coaches to bond together over a meal and reflect on the marvelous year that they’ve had and to contemplate what lies ahead: the opportunity to bring a state championship home to Americus and Sumter County.

As the players were eating and fellowshipping with each other, Johnson showed them some footage from the movie “Facing the Giants”. In the footage, it showed a football coach motivating a player while he was doing the “death crawl”, a drill in which a player crawls down the field with someone on his back without his knees touching the ground. In the scene, the coach is motivating the player to keep going and not quit. Eventually, the player makes it all the way to the end zone.

Johnson showed the team the footage to motivate them to give it their all on Friday when they hit the floor of the Macon Centerplex to take on Carver (Columbus) for the state championship. He also showed them highlights of last year’s NCAA tournament set to the song entitled “One Shining Moment”.

“Y’all have done some amazing things and y’all are right on the cusp of doing something that has never been done before ever,” Johnson told the team. “The question now is how bad do you want it.” Johnson went on to say that he read the Columbus paper and read where the Carver (Columbus) girls and boys are trying to make history themselves. Both teams are in their respective state championship games. “They want to be the 19th school to have the boys and girls win the state championship in the same year. They have their own motivations,” Johnson said. “Their coaches are telling their players ‘Hey, Americus-Sumter is ranked No. 1 and we’ve beaten them three times’. They don’t respect y’all. The key is who is going to be like that guy that gave a little more than what he thought he had. Who’s going to be that guy who dives for the loose ball.”? Tomorrow, I don’t know who it’s going to be, but somebody is going to have to step up.”

Johnson went on to challenge each player to write down on a notepad what he can do to help bring the state championship home to Americus based on his role on the team. 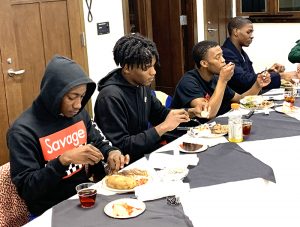 He also told the team about a Latin phrase called “Carpe Diem”, which means “Seize the Day”. “The only thing that matters is what happens at 1 p.m. tomorrow,” Johnson said. He went on to say that none of their previous playoff wins matter now and that the only thing that matters now is what team is going to play the best tomorrow. “Y’all can say that y’all are one of the best teams ever,” Johnson said. “There’s no guarantee that you will ever play for a championship again. Carpe Diem means we’re going to seize the day. Tomorrow is going to be the best game that we’ve ever played in our lives. I don’t care what Carver does. We’re going to come home with that trophy.”

The team will bus down Lee Street Friday morning at around 8:15 a.m. before they leave to head up to Macon for the state championship game against Carver (Columbus). Tip-off from the Macon Centerplex is scheduled for 1 p.m.