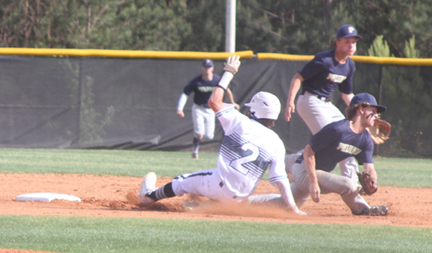 Schley County’s Garrett Peavy sliding into second base in a previous game. Peavy went 2 for 4 at the plate against Westfield. He scored two runs and drove in two RBIS in the Wildcats’ 15-3 win. ATR Archive

PERRY, GA – The Schley County Wildcat baseball team went up to Perry on Saturday, March 9, and administered a stinging 15-3 thrashing of the Hornets of Westfield.

The Wildcats scored their first three runs in the top of the second inning. With two outs, Lorne Barineau drew a walk. This was followed by another walk to Wurtz. The Wildcats had two men on with two outs. Ricky White then singled to left field, scoring Barineau and moving Wurtz to second base. Peavy got hit by a pitch to load the bases for Albritton. Albritton then hit a ground ball to second base and reached on an error by the Hornets’ second baseman. This allowed Wurtz to score to give the Wildcats a 2-0 lead. Taylor then singled, driving in another run to give SC a 3-0 lead.

The Wildcats scored three more runs in the top of the third inning. With two outs, Trent Bivins drew a walk, followed by a single by Barineau. The wildcats had runners at first and third with two outs. Wurtz then singled to right field to drive in Bivins, giving the Wildcats a 4-0 lead.

After Ricky White drew a walk, Barineau scored on a passed ball to increase SC’s lead to 5-0. Peavy then ripped an RBI double to center field, scoring Wurtz to increase the lead to 6-0.

Both teams scored two runs in the fifth inning to make the score 8-2 in favor of the Wildcats. In the top of the sixth inning, SC scored two more runs. With one out, Ricky White and Garrett Peavy both drew walks to put runners on first and second. Albritton then singled to right field, loading the bases for Dylan Taylor. Two runs scored on an error by the Hornets’ right fielder, giving the Wildcats a 10-2 advantage. Taylor drew a walk, but the Hornets were able to get to more outs to end the threat. Nevertheless, SC had a commanding 10-2 lead.

After the Hornets scored a run in the bottom of the sixth, the Wildcats blew it open in the top of the seventh by scoring five runs on an error, two walks, three singles and one passed ball to complete the win.

SC was scheduled to play Baconton Charter in Baconton, GA on Monday, March 11, but the game was rained out. They will resume region play when they travel to Hawkinsville, GA to take on the Red Devils of Hawkinsville. First pitch is scheduled for 5:55 p.m.