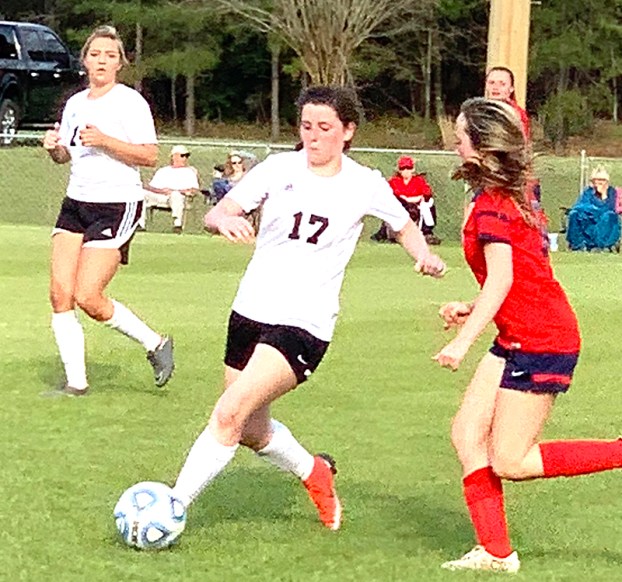 Southland Academy’s Riley Mitchell with the ball against Deerfield-Windsor. Photo by Ken Gustafson

ALBANY – The Southland Academy girls’ soccer team competed as hard as they could, but were overmatched by a quicker and more talented squad from Deerfield-Windsor (DWS). As a result, the Lady Knights were in total control of the match and won by the score of 4-0 on Thursday, March 14, at the Albany State West Campus.

“I just wanted them to compete,” SA head coach Rundy Foster said. “As long as they compete and work hard, I’m fine with anything that happens as far as the score is concerned. When you play a good team like that, it exposes your weaknesses, but I thought we played hard and played well.”

Southland Academy’s Brooke Wiesner with the ball trying to generate a goal for the Lady Raiders.
Photo by Ken Gustafson

During the first half, DWS was in total control of the match. The Lady Knights dominated most of the run of play (possession of the ball) and created numerous chances to score. The back line of the Lady Raiders was constantly under pressure during the entire first half. The Lady Raiders struggled to cross midfield due to the aggressiveness and quickness of the Lady Knights. On one occasion, the Lady Raiders were able to move the ball into the DWS end of the field and earn a corner kick, but were unable to take advantage of the opportunity.

DWS scored their first goal early in the first half when the Lady Raiders were whistled for a foul just outside their 18-yard box. As a result, the Lady Knights were awarded a free kick. The Lady Raiders set up a wall in front of the goal, but Haleigh Joslin’s free kick went past the wall and past SA goalkeeper Ansley Weldon to give the Lady Knights an early 1-0 lead.

Goals by Emilee Foy and Rachel Bonner gave DWS a 3-0 lead at the half. In the second half, the Lady Raiders showed some life as they were at times able to win possession of the ball and create chances to score. One particular chance took place when forward Brooke Wiesner received a pass and broke past the DWS defense. However, Weisner waited too long to shoot and DWS goalkeeper Emily Sosby came off her line to smother the ball, snuffing out the Lady Raiders’ chance.

The Raiders had another chance to score when Morgan Weaver took a shot on goal, but it was saved by Sosby. 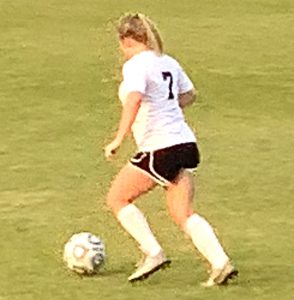 Southland Academy’s Hally Kate Turner with the ball trying to generate a goal for the Lady Raiders.
Photo by Ken Gustafson

Weldon was very busy in goal for the Lady Raiders. Though she gave up four goals, she was able to garner a few saves. One particular save came in the second half when DWS defender Kingsley Shepard shot the ball right at Weldon. The ball glanced off her fingertips and hit the crossbar, but she was able to pounce on it to prevent another goal.

DWS midfielder Bernadette Takash scored the Lady Knights’ fourth and final goal of the match to secure their 4-0 win over SA.

The Lady Raiders (0-4) will try to earn their first win of the season when they travel to Valdosta, GA on Tuesday, March 19, to take on the Lady Valiants of Valwood. Kickoff is scheduled for 6 p.m.

From Staff Reports   AMERICUS – The Panthers will have a new head football coach roaming the sidelines at Alton... read more