Wildcats improve to 13-0 with 4-2 win over Brookstone 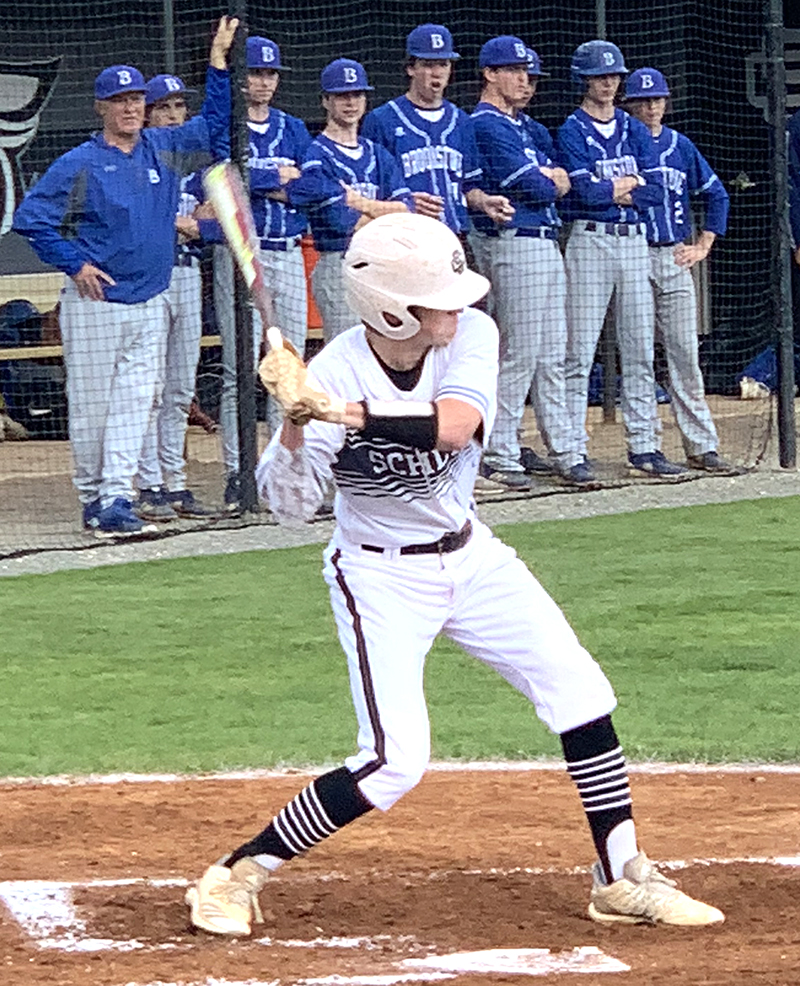 Schley County center fielder/pitcher Garrett Peavy led off the bottom of the first inning with a home run in the Wildcats’ 4-2 win over Brookstone. Photo by Ken Gustafson

ELLAVILLE – The Schley County Wildcat baseball team got a leadoff home run by centerfielder Garrett Peavy and benefited from solid pitching by Ashton Goodin, Peavy and Lorne Barineau to nail down a hard-fought 4-2 victory over their Region 1-A arch rivals Brookstone on Friday, March 15, at Schley County High School.

With the win, the Wildcats stay undefeated at 13-0 on the season and are ranked #1 in the state in the Georgia High School Association (GHSA) Class A-Public Division.

“Every year, Brookstone (BS) is our measuring stick,” SC head coach Chuck Cheek said. “It seems like every year, it comes down to us and them. That’s going to happen again this year, though we still have some games that we need to win.” Cheek went on to praise the accomplishments of the Brookstone baseball program and their head coach, Vince Massey. “Vince is a really good friend of mine. He’s one of the best friends I’ve got in the coaching business,” Cheek said. “I know that his teams are always well prepared and they compete. They’ve got great athletes.”

For most of the game, it was pretty much a pitchers’ dual. SC starting pitcher Ashton Goodin pitched 5.1 innings and was able to hold the Cougars in check. He gave up only one run on four hits, walking four and earning two strikeouts before being relieved in the top of the sixth by Peavy. Goodin had some help from his defense as well. The Wildcats turned three double plays in the game.

Peavy, who started the game in center field, came on to pitch in the top of the sixth inning with runners at second and third and one out. Peavy walked Haze Voltz to load the bases, but was able to strike out the next two batters to end the Cougars’ threat.

The Wildcats scored two runs in the bottom of the first inning to get on the board first. Peavy led off with a home run. Then left fielder Dakota Albritton drew a walk from BS starting pitcher Trey Sanders. After Dylan Taylor hit into a fielder’s choice, Dylan Windham drew a walk to put runners at first and third with one out. Goodin struck out for the second out of the inning, but right fielder Trent Bivins singled, driving home Albritton to give the Wildcats an early 2-0 lead. 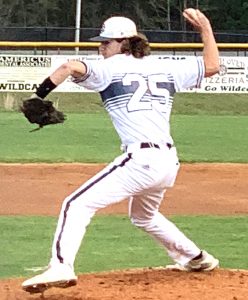 Schley County starting pitcher Ashton Goodin gave up one run on four hits to help lead the Wildcats to a 4-2 victory over Brookstone.
Photo by Ken Gustafson

SC scored two more runs in the bottom of the fourth inning. Goodin led off with a walk, followed by a double by Bivins. With runners at second and third and no outs, Lorne Barineau hit into a fielder’s choice, scoring courtesy runner Tucker Welch. Bivins advanced to third on the play.

Catcher Trypp Lumpkin hit a sacrifice fly, scoring Bivins from third to give the Wildcats a 4-0 lead. The Wildcats ended up not needing any more runs in this game.

BS scored their first run of the game in the top of the sixth inning. Sanders led off the inning by reaching on an error by Barineau. After Jackson Milliner popped out in foul territory, Ben Sloan and Luke Norman both drew walks to load the bases. At this point, Goodin was relieved by Peavy. Peavy walked in a run, but struck out the next two hitters. The Cougars scored another run in the top of the seventh as Jeremiah Burgess led off with a single, but Bivins misplayed the ball in the outfield, allowing Burgess to reach third base.

Peavy, who came on in relief of Goodin in the sixth, walked the next two batters to load the bases. Lorne Barineau was brought in to pitch to Jackson Milliner. Milliner hit into a fielder’s choice to score Burgess. However, Barineau struck out Ben Sloan and got Luke Norman to ground out to end the game.

The Wildcats scored four runs on three hits and committed two errors. The Cougars scored two runs on five hits and did not commit any errors. Bivins had the best day at the plate for the Wildcats. He went 2 for 2 at the plate with a single, a double and a walk. He scored one run and drove in another. Luke Norman led the way offensively for the Cougars. Norman went 2 for 3 with two singles and a walk.

Garrett Peavy gave up one run on one hit. He walked three batters, but struck out two. Barineau came on in the seventh, giving up no runs or hits and striking out one.

Trey Sanders went the distance for BS. He had a solid outing on the mound for the Cougars. Other than walking five batters, he gave up four runs on three hits and struck out nine Wildcat hitters.

“If we do what we need to do, we’re in a good position to get to the region championship,” Cheek said. “It’s going to be a best of three-game series this year, which we are really excited about. Us winning today means that the doubleheader will be here if we can get that far. We can’t slip up along the way. We have to bring it every night. When we play really well, we can be one of the teams that people talk about, but we have to bring it every night.”