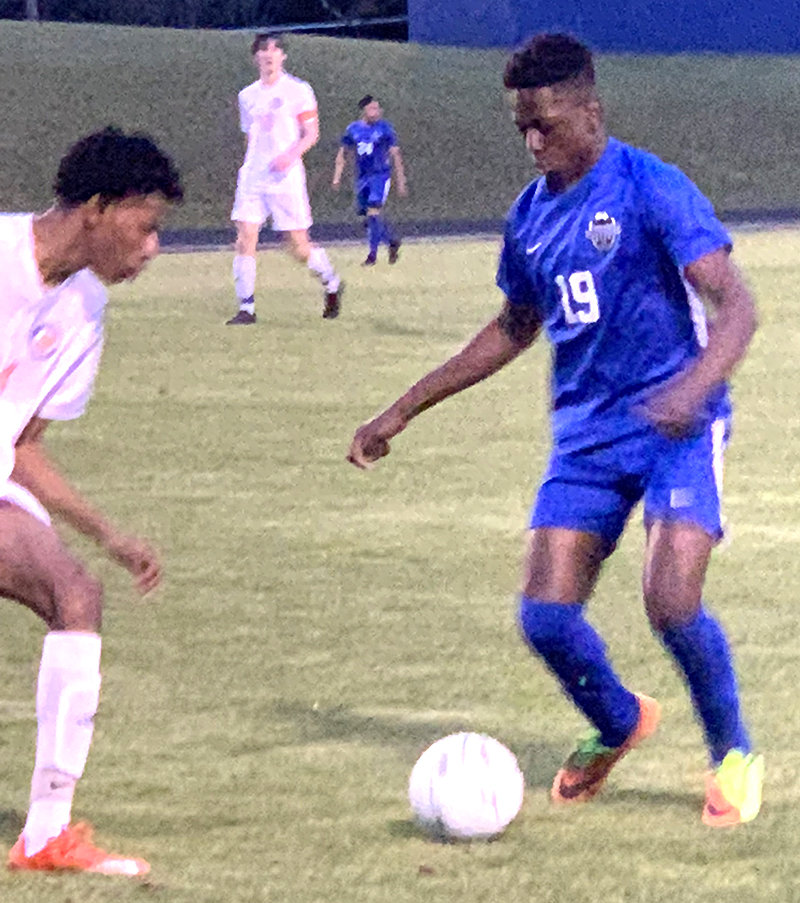 Americus-Sumter forward Agbasi Chidery with the ball against a CHS defender. Photo by Ken Gustafson

AMERICUS, GA – After a 4-3 win over Hardaway on Wednesday, March 13, the Americus-Sumter boys’ soccer team was hoping to continue their winning streak when they hosted the Blue Devils of Columbus High School (CHS) in another important Region 1-AAAA match. However, though they tried the best they could, the Panthers struggled against the Blue Devils’ one-touch passing offense, which led to a 7-0 defeat at the hands of CHS.

“They have a really good team. You can see that they have been playing since they were little kids,” ASHS head coach Felix Jimenez said. “They have a lot of structure and that makes a big difference.” 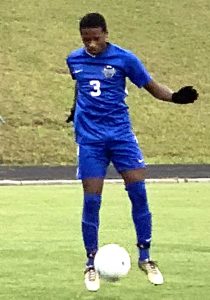 The Blue Devils got on the board early in the first half when Carl Owen scored the first of his two goals in the game. Then in the 23rd minute, CHS got their second goal when Julianh Miranda scored on a header off a corner kick to give the Blue Devils a 2-0 lead. Miranda scored again almost five minutes later to increase the lead to 3-0.

The Panthers struggled to keep possession of the ball and the Blue Devils were able to dominate the run of play. They moved the ball down the field using precise one-touch give-and-go passing and making runs off the ball. The Panthers tried to maintain possession in order to generate an offensive attack, but were unable to link their passes in order to create chances to score. They were up against a superior and more talented team in the Blue Devils. 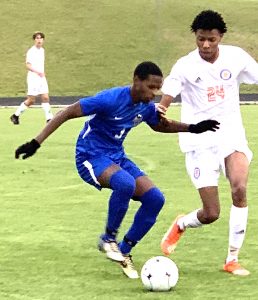 Montavious Nedd (3) tries to advance the ball for the Panthers against Austin Baker (24) of CHS.
Photo by Ken Gustafson

With a little over a minute left in the first half, CHS struck again when Gabe Burgamy scored to increase the Blue Devils’ lead to 4-0 by halftime. The Blue Devils kept up the pressure on the ASHS back line in the second half. Leo Varela increased the CHS lead to 5-0 when he scored. This was followed by two more goals. Owen scored his second of the game, and Jordan Sturla scored just before the end of the match to give the Blue Devils a 7-0 win. 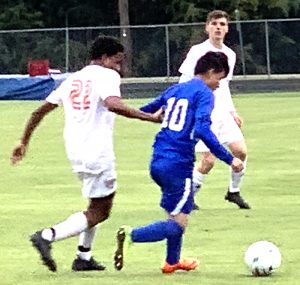 In spite of the lopsided defeat, Coach Jimenez was not disappointed in his squad’s effort. “I’m really proud of my guys. They tried to do their best, but this is a really good team,” Jimenez said. “We were aware of that before the match. We are improving and we are still in the growing process. Last year, it was worse, but this year, we are improving a little bit. This is a process that takes time.” 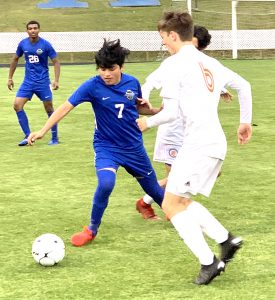