AMERICUS – Several local politicians, community leaders, parents and of course, the members of the Americus-Sumter varsity boys’ basketball team gathered in the ASHS gymnasium to celebrate the achievement of the Panthers making it all the way to the state championship game.

“We want to welcome our community to our boys basketball team celebration at the Americus-Sumter High School,” ASHS principal Kimothy Hadley told the assembled crowd. “They faced and defeated some of the top programs in the state. The road to the state championship game was not an easy one.” 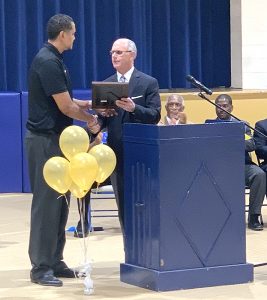 Americus Mayor Barry Blount hands a proclamation plaque to ASHS head coach Michael Hoffpauir honoring the coach and his team for their success in reaching the state championship game.
Photo by Ken Gustafson

The road for the Panthers (26-5) was a hard one indeed. They opened the GHSA Class AAAA State Playoffs with a 72-50 win at home against Salem (17-10) on Friday, February 15. From there on out, the Panthers were on the road. Their next opponent was the two-time defending Class AAAA state champions Upson-Lee (25-2). The Panthers went to Thomaston and ended the two-year reign of the Knights by pulling off the 59-53 upset on Thursday, February 21. From there, it was on to Atlanta to take on another perennial power: the Golden Lions of St. Pius X. The Panthers had no problem as they dominated SPX (26-4) from start to finish, winning the game 63-46. 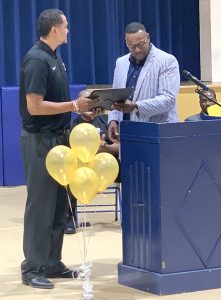 Another huge roadblock the Panthers had to overcome was Sandy Creek (27-4) in the state semifinals on Saturday, March 2. The Panthers toppled the Patriots 63-56 to advance to the state championship game against their Region 1-AAAA nemesis: the Tigers of Carver (Columbus). Unfortunately for ASHS, they came up short, losing to the Tigers 58-55 on Friday, March 8, at the Macon Centerplex.

In spite of the disappointment of not winning the state championship, the community of Americus and Sumter County as a whole showed up to celebrate the Panthers’ achievement. Local community leaders made several proclamations. Americus Mayor Barry Blount, Sumter County Board of Commissioners Chairman Clay Jones and Jones’ wife Tammye, who serves as Field Representative for Congressman Sanford Bishop of the 2nd District of Georgia. 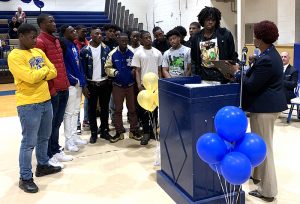 Tammye Jones, Field Representative for Congressman Sanford Bishop and wife of BOC Chairman Clay Jones, presents a proclamation plaque to the Americus-Sumter boys’ basketball team for their accomplishment in making it to the state championship game.
Photo by Ken Gustafson

The ASHS boys’ basketball team was not the only team to be honored this day. The 10u Sumter County Boys’ All-Star Team was recognized for their achievement in winning the Georgia Recreation and Parks Association (GRPA) State Championship. The Sumter County Middle School girls’ basketball team was honored for their achievement in winning the Deep South Conference Championship. The crowd also got to see performances from both the Sumter County Middle School cheerleaders and the Americus-Sumter High School cheerleaders as well. 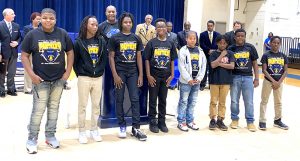 The Sumter County 10u all-star basketball team being honored at the community celebration for winning the GRPA 10u basketball state championship.
Photo by Ken Gustafson

In his speech, Blount reminded the boys that what they had accomplished hadn’t been done in over 50 years. “The last time the Americus High School boys basketball team made it to the state championship game, Dan Reeves was in high school and I was in Kindergarten,” Blount said.

Near the end of the proceedings, Dwight Harris, Athletic Manager for the Sumter County Parks and Recreation Department (SCPRD), quoted from Dr. Martin Luther King Jr. ‘If you can’t be a pine on the top of a hill, be a scrub in the valley, but be the best little scrub on the side of the hill. Be a bush if you can’t be a tree. If you can’t be a highway, just be a trail. If you can’t be the sun, be a star. It isn’t by size that you win or fail. Be the best at whatever you are.’

AMERICUS, GA – After a 4-3 win over Hardaway on Wednesday, March 13, the Americus-Sumter boys’ soccer team was hoping... read more