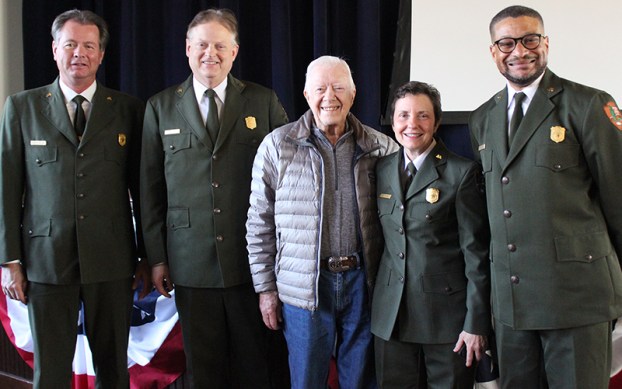 ATLANTA — Monday, National Park Service (NPS) Southeast Regional Director Bob Vogel announced that Jill Stuckey has joined the agency as superintendent of Jimmy Carter National Historic Site in Georgia.
Former President Jimmy Carter said, “I can think of no one better to assume the role of superintendent of the Jimmy Carter National Historic Site. Jill Stuckey is a true public servant who honorably and consistently has demonstrated her dedication to the city of Plains, the state and the country.”
“We at NPS are honored to have recruited someone with such a distinguished record of service,” said Vogel. “Jill brings substantial familiarity to the job, having chaired the park’s friends group and worked on issues pertinent to the park’s mission. She will add immense value to the preservation and interpretation of the special places that helped shape our country’s 39th president.”
Stuckey’s background includes extensive work in rural development, natural and renewable resources, heritage tourism, and public-private sector collaboration. As the state director of the U.S. Department of Agriculture Rural Development in Georgia, Stuckey managed a half-billion-dollar portfolio and helped secure loans for rural Georgians totaling more than $30 million. Stuckey generated record-setting revenue as director of Georgia’s Herty Advanced Materials Development Center and helped the state attract over $1 billion in new industries while directing the Georgia Department of Economic Development’s Center of Innovation for Energy. She also served as director and co-director of the state’s Alternative Fuels and Underground Storage Tank Programs, respectively. Most recently, Stuckey worked as a senior advisor with the U.S. Department of Education Federal Student Aid program.
As an entrepreneur, Stuckey co-established Easco/Triangle Inc., one of Georgia’s largest fuel maintenance companies, and J&J EcoCool, which promoted a liquid catalyst eliminating oil fouling in HVAC systems. Stuckey has been an active volunteer in the Plains community with service as mayor pro tem, Plains City Council member, Plains Better Hometown Program board member, board member of the Jimmy and Rosalynn Carter Boys & Girls Club, chair of the Friends of Jimmy Carter National Historic Site, and Coastal Heritage Society member, among other responsibilities. Stuckey co-authored, “Ossabaw Island: A Sense of Place,” a photographic and historical account of Georgia’s first heritage preserve published in 2016.
Stuckey said, “It is an honor and privilege to accept the position of superintendent of the Jimmy Carter National Historic Site. I embrace this wonderful and unique opportunity to be of service to a living president and to lead the efforts to help the Carters’ specific vision for the site to be realized, including such important tasks as the preservation of: President Carter’s boyhood farm, the high school that President and Mrs. Carter attended, and the campaign headquarters in Plains. I am anxious to assume the duties of superintendent, working alongside President and Mrs. Carter, the very dedicated park employees and the great people at the National Park Service and Department of the Interior, many of whom have dedicated their lives to preserving our lands and national treasures.”

Stuckey received a bachelor of arts degree in business administration from Ohio University.